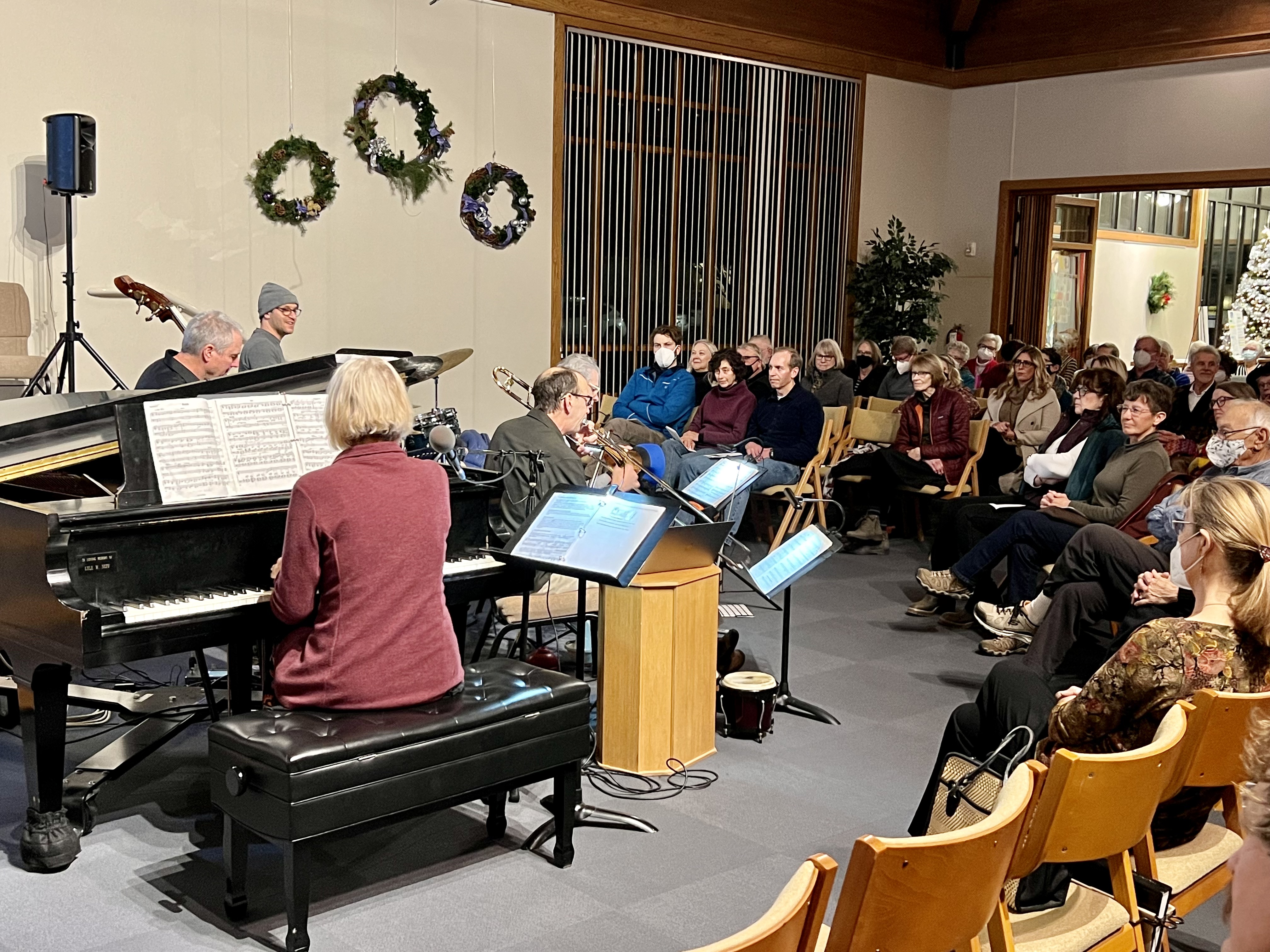 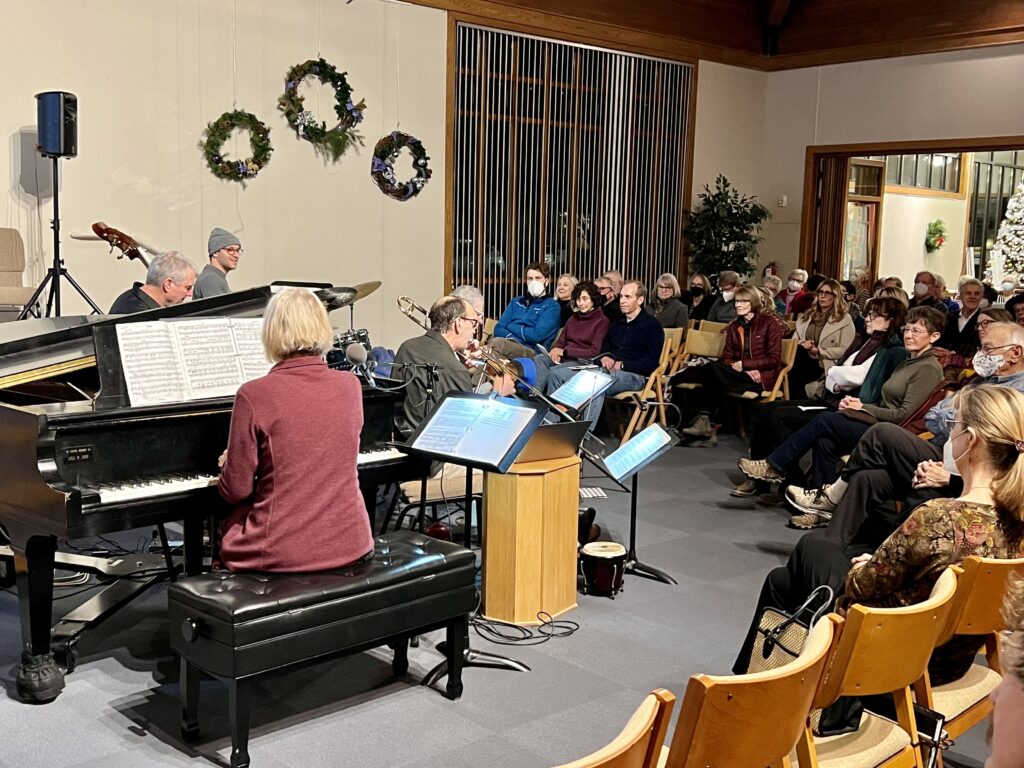 “I got this idea that maybe I could make this performance that melded information, facts about climate change with music that made it more tolerable to hear the hard stuff,” Swiggett said before the Richland performance Dec. 3.

The quintet, with Swiggett on piano; Julian Smedley on violin; Clif Swiggett on trombone and bongos; Chris Symer on bass; and Adam Kessler on drums, has performed the “The Alaska Suite: a story of beauty, loss and hope” since 2017.

The idea came to Nelda Swiggett after she talked to her brother-in-law about the effects of climate change in Alaska. She’d gone to see Alaska’s Arctic National Wildlife Refuge and Denali National Park and Preserve for herself, and narrated her trip during the 1.5-hour concert, which also features poetry and has audience members commit to making small changes to protect the planet, such as driving electric cars or eating less meat.

Even though she knew she wanted to compose a suite of music to help the realities of climate change go down more smoothly, Swigget said she chewed on the idea for a while. She began composing the first iteration of “The Alaska Suite” after accidentally attending an intimate, interfaith small-group gathering on climate change.

She walked into the meeting, a little late, and sat down in the circle of 10 chairs. People listed off ideas about what they’d like to do the following year to address climate change. She mentioned she wanted to compose music for a live performance. Her idea went up on a sticky note in the front of the room.

“Then they said, ‘OK, now go put your name up next to the projects that you want to support.’ And the next thing I know, I look up there, and there’s a couple stickers next to my music project,” Swiggett said. “And honestly, you need that (support) to really get moving.”

Swiggett, 62, said she started composing music in earnest after she graduated college. She started classical piano lessons at 8 years old.

As a child Swiggett said she also cared about the outdoors. She grew up in the Pacific Northwest, bushwalking through underbrush, spending time outside skiing and boating.

“I just grew up with this love of nature and love of the beauty of the wilderness. And as a result, at an early age, I started feeling this real connection to nature and in pain when I saw it getting damaged,” she said.

Later, that pain turned to anxiety about climate change. She said she saw many people saying they understood the science of climate change: that human activities, such as burning fossil fuels, release heat-trapping greenhouse gasses that, if not slowed, will cause catastrophic changes to the world’s climate. In the Northwest, those changes include decreasing snowpack, precipitation that falls as rain instead of snow, hotter and drier summers, and worsening wildfire conditions.

Between 1895 and 2011, the Pacific Northwest has warmed around 1.3 degrees Fahrenheit, according to studies listed by the University of Washington’s Climate Impacts Group.

While the threats seemed to become more of a reality each year, Swiggett said, too many people she knew worried about climate change instead of doing something about it.

“It’s almost a taboo to talk about climate change with people because it’s become not even just a political issue. It’s just that people are uncomfortable,” she said. “It’s like telling someone how to parent their children. You don’t tell people how to parent their children. It feels almost the same way with the choices people make around climate.” 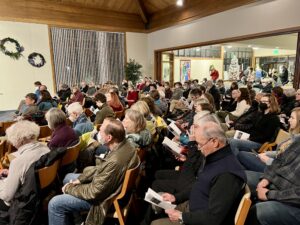 Music, she thought, could help.

“People have a hard breakup and then listen to country western songs lamenting hard breakups,” she said. “We can listen to songs about sad, hard things. We can do that because music just kind of opens up and lets us sit there with it.”

“A lot of social science shows that people not only respond more to emotion but it’s got to be personal somehow to them, experienced firsthand, like we do here, the increasing temperatures in the summer and other strange weather events,” Rathbone said after the concert.

“No one person has to do everything,” Rathbone said. “If we could each do something, it could really add up and make a difference.”

As an early career scientist, Mickey Rogers, 27, said young people need to be at the table during climate change discussions.

“We’re going to be the ones that are experiencing all of these negative effects from climate change. And so we really need to have a voice at this table around the climate discussion,” Rogers said after the concert.

“We know the severity, and it was kind of nice to see it in this language that’s not technical. We always work with technical science and stuff, so this was a way that anyone could understand the severity of climate change,” Rogers said.

After the concert, Brittney Gorman said the music captured what’s happening as the climate changes.

“All of the parts really captured the essence of what they were trying to capture. In ‘Melting,’ there was a specific beat in it that sounded like elements of melting water,” Gorman said.

“The Alaska Suite” featured nine pieces, including “Melting,” “Burning,” and “Worry.” At the start of each piece, Swiggett read an introduction about those effects of climate change in Alaska and often related the effects back to Washington.

Violinist Julian Smedley said even though the quintet has performed “The Alaska Suite” at least 30 times, each performance differs from the last.

“There’s something happening all the time,” Smedley said of the music. “And then there are these beautiful moments where things just open out and the texture just breathes. It’s really like being part of a piece of poetry or any kind of art that evolves over time.” 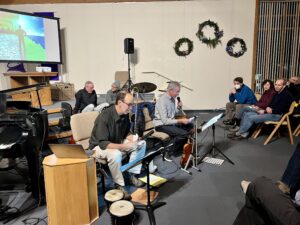 The musicians said they wanted this performance to help people’s anxiety and grief over climate change evolve as well.

Toward the end of the performance, Nelda Swiggett asked audience members to write notes about how they work to lower their own carbon footprint and what they plan to do in the future.

Smedley and Swiggett’s husband, Clif, read out the anonymous pledges while soft piano music played in the background.

Reading one anonymous pledge, Clif Swiggett said, “Someone wrote, and this ends with an exclamation point: ‘I have a clothesline!’”

Some audience members have said they’ve made changes after hearing “The Alaska Suite,” Nelda Swiggett said. One repeat audience member purchased an electric vehicle after pledging to do so at an earlier concert, she said.

Those sorts of commitments might help people realize they can be better stewards of the planet, she said.

“Most of us are feeling anxiety about climate change,” she said. “I’d like to hope that this performance helps people get a little more clarity on what they can do.”