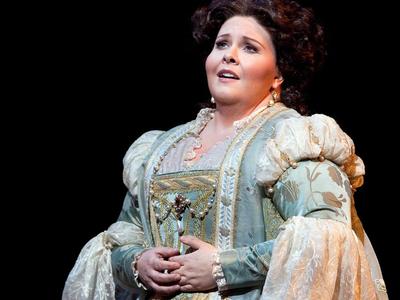 Angela Meade: From the Northwest to Opera Stardom

This month, the Northwest native Angela Meade will grace the stage of the Metropolitan Opera in New York in Verdi’s Ernani. The Centralia native is no newcomer to opera, and has maintained a buzz of international excitement from critics and opera fans alike, since the beginning of her career in 2008.

Meade was on the Opera News’ cover in their 13th Diva Issue in November. Chronicling her rise to stardom, Fred Cohn wrote:

“In more than thirty years of attending performances of Norma, I had never encountered a soprano able to negotiate the monumental title role accurately and without technical compromise. That is, until July 10, 2010, at the Caramoor Festival in Katonah, New York, when Angela Meade, then thirty-two, sang the role, beginning to end, just as I had always hoped to hear it — with a plush, large-scale sound; a secure, ringing top; an incisive lower range; and, above all, with a realization of every note of the score, with the treacherous coloratura passages voiced firmly, fully — and thrillingly. Here was that rare creature, a dramatic soprano d’agilità.”

The story of soprano Angela Meade’s “overnight success” at the Metropolitan Opera is well known, writes the Associated Press. “She wins the National Council Auditions, is hired as an understudy for Verdi’s “Ernani,” makes her debut when the leading lady falls ill — and a new star is born.”

In more than thirty years of attending performances of Norma, I had never encountered a soprano able to negotiate the monumental title role accurately and without technical compromise. That is, until…Angela Meade sang the role.

The feature includes Meade’s advice for young performers, the problems she’s faced since thus far in her career and her first experience with opera during her time at Centralia Community College.

From Centralia, Meade earned a music degree from Pacific Lutheran University in Tacoma, then continued her education in California and Pennsylvania. That led to her impressive debut: “She landed on top instantly with her professional debut in the lead soprano role of Giuseppe Verdi’s Ernani at New York’s Metropolitan Opera in 2008,” wrote NPR’s Tom Huizenga.

Angela Meade has won 57 vocal competitions around the world, and was one of the winters of the highly coveted Met National Council Audition in 2007 (watch the documentary).

That’s just one of the many prestigious awards she’s earned. Meade’s career continues to blossom, having performed at the Vienna State Opera (I vespri siciliani); Deutsche Oper Berlin (I due Foscari) Los Angeles Opera and Cincinnati Opera as (Don Giovanni); and the Washington National Opera (Norma), where she was subsequently honored as the 2013 Artist of the Year.

Besides her performances at the Met this month, Meade will also be performing Verdi’s Requiem with Spain’s Oviedo Philharmonic on April 26.