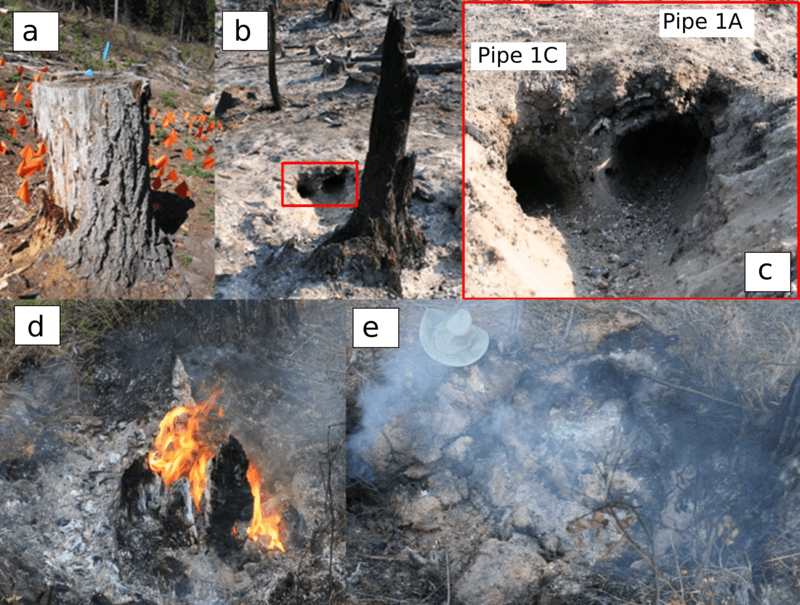 The Fire May Be Out Above Ground But Not Below

Did you know that after a forest fire tree roots can continue to burn? Usually dirt is used to snuff out a fire. So how is it possible for tree roots to burn after the above-ground fire is out?

“There is enough oxygen,” says University of Idaho Professor of Forest Resources Alistair Smith. “They don’t need much continuous air to sustain smoldering combustion. It helps that the burned out roots essentially form chimneys that enable some degree of air circulation.” 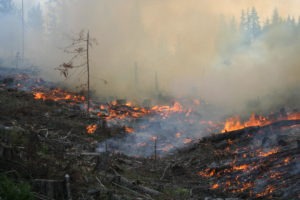 The practice of timber harvest tends to leave behind a large number of even-aged stumps and roots which will combust at similar rates. So it is likely that timber harvests enhance the occurrence of such soil pipes in forested watersheds. CREDIT ROBERT HEINSE / UNIVERSITY OF IDAHO

Imagine a stump and its root system burning to ash. What are left behind are tunnels. You could step on and  fall through these hot spots, according to a warning on the North Star Fire Colville Indian Reservation Facebook page. But Smith says he hasn’t heard of many hikers having this experience and adds that a real problem is the ability of water to flow down the slopes.

This led us to University of Idaho Professor Robert Heinse who studies these systems. “Root materials that have been decaying in forest soils for some decades can combust during forest fires and either create what we call soil pipes – large open networks in the soil – or at least connect such networks to the soil surface.” 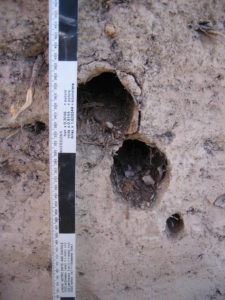 Large scale fires create more soil pipes than burrowing animals which allows for more water to flow downhill and that can cause loss of water retention in forests.
CREDIT ROBERT HEINSE / UNIVERSITY OF IDAHO

Burrowing animals also make tunnels but in the case of large forest fires, soil pipes are created en masse and stay for a long time. When there is heavy rainfall or rapid snow melt, the soil pipes enable water to flow downhill faster than water saturating bulk soil. This contributes to flooding and soil erosion.

That’s one result of fire damage in forested areas but what about the grasslands and shrub lands of the Columbia Plateau? It would seem that shrubs and grasses rejuvenate quickly because they are smaller. But that’s not the case for sagebrush which can take 15 to 30 years to mature. 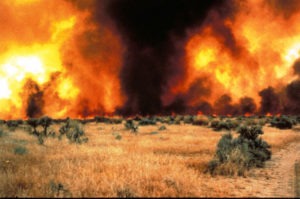 A fire in Mountain Home, Idaho in 2013 shows the black smoke of burning sagebrush and the lighter colored smoke of burning cheatgrass. The invasive cheatgrass will takeover areas where sagebrush dies out after fire making it difficult for the native species to grow back.
CREDIT MICHAEL PELLANT/BLM / U.S. FISH AND WILDLIFE HEADQUARTERS

University of Idaho Geography professor Crystal Kolden adds that fire isn’t the only obstacle for sagebrush. “Normally, if there is no cheatgrass the sagebrush would regenerate. But cheatgrass responds to fire by growing and covering more area that used to be sagebrush to the point where no sagebrush seedlings can get established. That is a key concern to loss of habitat to the sage grouse.”

The other obstacle Kolden says ecologist worry about is climate change. “We don’t know what species will be able to persist and grow back after a fire because of climate change.”

But she says there are things you can do to help. “I think the challenge for the average citizen is actually help preserve what is left. Forests and sagebrush grow back over very long periods, much longer than most people will be around to see, since it takes decades to centuries to regenerate. But people can support forest management efforts, like prescribed fire, that will help preserve the forests and sagebrush that are left. Preserving those remnants is crucial because they provide habitat, and they provide the seed that will be used to replant the burned areas.”