Forty-two percent of America’s honey bees died in 2014. On average, beekeepers lose about 30 percent of their colonies annually – a number seen since 2006. As a trend, the numbers look even worse. In the 1940s there were 5 million managed honey bee colonies. Today, there are half as many.

This has many worried about the future of American agriculture. Farmers need bees to pollinate their crops. Beekeepers need plants on which their bees can feed. But those plants aren’t always ones farmers want on their land. That’s making it tough for some farms to get enough bees, and difficult for beekeepers to recover from their annual losses.

The problem isn’t just a matter of the total number of bees. It’s about the economics of beekeeping – and whether it’s worth the risk to stay in the industry.

The Hard Work And High Risk Of Beekeeping

Beekeepers can recover from losses, and regularly do. After all, about a third of their bees die each year on average. Commercial producers are very good at breeding enough bees, and they can always buy more from other beekeepers. There are even nukes – a beekeeper’s term for a small colony with an active queen that can be cultivated into a full-size honey bee colony.

But that doesn’t mean it’s easy. Matthew Shakespear, vice president of Olson Honey in Yakima, says he’s gotten about three hours of sleep a night for the past several weeks. That kind of work can turn people off of beekeeping.

“There are new people coming in, but often those new people don’t last very long, because they run into a few difficult years,” Shakespear says.

There’s a lot of money to be made in bees, but it also takes significant investment – and risk.

“There’s no easy or cheap solution to doing that,” Shakespear says. “You have to invest the money into keeping them alive. Oftentimes the newcomers in the industry are reluctant to do that. They would prefer to preserve their profits and spend it on something else.”

Addressing the economic problems of beekeeping means figuring out how to keep more bees alive. 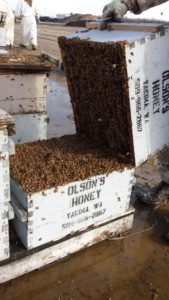 Why Are So Many Bees Dying?

The most publicized reason for honey bee losses has been Colony Collapse Disorder (CCD), a condition in which adult bees can disappear from a colony, leaving behind a live queen and young (known as brood), but no dead bees. But CCD cases have decreased since 2011. Survey reports for the 2014-2015 year don’t consider it a major factor.

So why are so many bees dying, year after year?

There are a few causes of honey bee loss for commercial apiaries – disease, pests, and various stressors – but two stand out. The first is varroa mite. Scientifically – and appropriately – classified Varroa destructor, these tiny insects latch onto both adult bees and brood, draining them of blood. They can cause deformities, transmit viruses to bees, and quickly kill a colony. Battling varroa is a constant struggle for beekeepers, but chemical treatments can be effective, although they are hard on bees.

The second threat is less dramatic, but just as crucial: bees don’t have enough to eat.

The Challenges Of Feeding Honey Bees 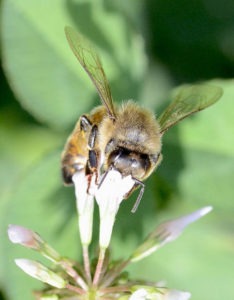 A honey bee feeds on clover. Many varities of clover are valuable forage for honey bees – if they have access to it.
Photo credit: Jimmy Smith / Creative Commons

Like us, bees need protein and carbohydrates to survive. Honey bees get their carbohydrates from flower nectar. And there are artificial substitutes. Beekeepers sometimes feed their bees a mix of sucrose and fructose, pumped into feeders in beehives.

“Most farm animals, we’ve figured out how to keep them alive on food we can provide them,” Matthew Shakespear says. “But if we were to just stick bees in a room and provide them with our version of their food, they wouldn’t last more than about two months before the hive would be dead.”

Olson Honey has between 16,000 and 18,000 hives. They make a living renting out bees to farms and orchards that need pollinators. When that’s happening, bees can feed off the plants they pollinate. Those sources aren’t available year-round. And many of the other plants bees need are weeds, which farmers work hard to get rid of.

“We’ve kind of gone to the big ag model where we have the big circles, the big fields, where even the corners don’t have any weeds,” Shakespear says.

This means that once crops are done blooming, there’s nothing for bees to eat. So it can be hard for Washington apiaries to keep their bees in the state.

“If you talk to commercial beekeepers here in the state, they used to be able to keep their bees here year-round,” Brandon Hopkins says. “As soon as apples are done, they move all their bees to Montana, North Dakota, South Dakota.”

Those states are home to Conservation Reserve Program lands, many of which grow clover – an excellent plant from a bee’s perspective. That also gives beekeepers a chance to produce honey. But they make most of their money from a single source: almonds. 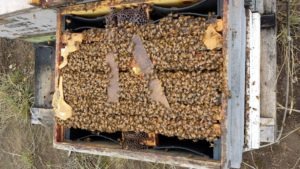 You can’t discuss the problems of bee nutrition – or the commercial bee industry at all – without talking about almonds. Bees and almonds have a special relationship. Every year, almond orchards in California rent upwards of 1.6 million colonies to pollinate their trees. That’s about 60 percent of all the colonies in the country. Almond season is the biggest moneymaker for most commercial apiaries.

“If it were not for the income we receive from the orchards in California, commercial beekeeping would not exist,” Shakespear says. “That industry in particular, because of what they pay for the bees, makes it possible for beekeepers to continue to exist, in the face of varroa mites and the lack of forage.

But it can be tough for almond producers to find enough bees, especially since almond trees begin to bloom in February. Apiaries face the majority of their losses in winter, just before the bloom. And this year, almond orchards faced a honey bee shortage. That’s one reason some almond orchards are working to become less dependent on bees, with efforts to grow self-fertilizing trees.

For now, they need a lot of bees. Around 31 billion every year. After the bloom is over, they all have to go somewhere. Constantly moving bees can be stressful. It may even contribute to those high annual losses.

Keeping the bees where they are isn’t often an option. There’s not enough forage in almond orchards after the bloom is over, for the same reason there’s not enough on Washington farmlands: plants that are good for bees aren’t always good for farmers.

So what’s being done to fix it?

Mustard, Radishes, And Other Plants That Aren’t Almonds

Project Apis m. is a non-profit working to improve honey bee health. They’re behind the Seeds For Bees project, working to get more bee-friendly plants into almond orchards.

“There’s situations where a beekeeper will drop their bees off in that orchard, and it can be a few days or a week before the almonds will bloom,” says Billy Synk, manager of the Seeds For Bees project. More forage means bees have enough to eat before and after the almonds bloom.

They’ve settled on four species of clover, two varieties of mustard, canola, and daikon radish. Daikon flowers are good for bees, and their enormous roots are beneficial to farmers, breaking up the soil and eventually decomposing into useful fertilizer. Clover is also good for the soil, a nitrogen-fixing legume that makes for more fertile land. They’re also inexpensive to distribute.

Almond growers didn’t take to the project right away. Many were concerned about competition. After all, they pay a lot of money for bees to pollinate their almonds. Why would they want their honey bees flying to other flowers? Synk says that’s just not how bees work.

“When almonds bloom, bees don’t know it’s going to last. In their minds, they’re hedging their bets, they’re making sure they’ve found something else,” Synk says. “The bees will pollinate the almonds in the morning, then switch to the cover crops in the afternoon. You just want to attract as many bees as you can to your orchard.”