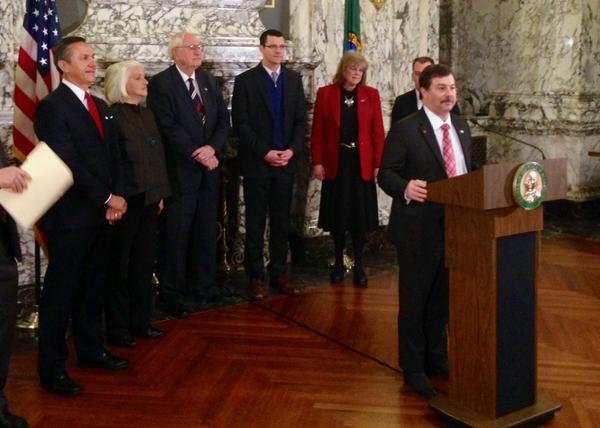 Washington Senate Republicans have proposed a $5 billion increase in state spending over the next two years, including $1.8 billion more for public schools in an attempt to satisfy a Supreme Court ruling that found the state is not adequately funding K-12 education.

“It increases funding for all schools in the state of Washington,” said state Senator John Braun, the Republican chair of the Senate Ways and Means Committee. “It’s ample…and it’s equitable around the state.”

Overall Republicans would spend $43.3 billion over the next two years.

The Senate Republican budget, unveiled Tuesday morning in Olympia, relies on a new state property tax levy of $1.55 per $1,000 of assessed value to fund much of the increase in education spending. In turn, the Republican plan would eliminate local school maintenance and operation levies.

For instance, a homeowner in Seattle would pay $165 more in property taxes for a house assessed at $500,000.

The proposed Senate budget would also fund 1,800 additional resident student slots at the state’s four-year universities with a focus on science, technology, engineering and mathematics.

In mental health, Republicans would begin to fund a 10-year transition away from state hospital-based treatment to community-based treatment — something Democratic Governor Jay Inslee has also proposed.

‘A marginal education budget at best’

But at a news conference, Inslee criticized the Republican proposal.

“It does not amply fund education,” he said. “This is only a marginal education budget at best.”

In December, Inslee proposed a $46.5 billion spending plan. It included a new proposed tax on capital gains and a new carbon tax. Inslee said he still prefers that approach to the Senate Republicans’ reliance on the property tax.

“I do not believe raising property taxes is the way to go about funding education,” he said.

Inslee also criticized savings in the proposed Republican budget from not funding collective bargaining agreements negotiated between Inslee and unionized state employees. Instead, Republicans would give state workers an across-the-board $1,000 pay raise. Collective bargaining contracts for state troopers and prison workers would get funding.

Braun said he believes the contracts the governor negotiated are too generous.

“We ask, ‘are they truly necessary resulting in nearly half the state employees receiving double-digit pay increases?'” Braun said.

Inslee countered that state workers are still catching up on pay from the great recession. He also said the decision not to fund the bargaining agreements would imperil efforts to turn around Western State Hospital by hiring and retaining more nurses.

Cuts to the safety net

Legislative Democrats were also quick to criticize the Republican budget for cuts to the social safety net. State Senator Kevin Ranker, the ranking Democrat on the Senate Ways and Means Committee, decried several cuts including the elimination of the Housing and Essential Needs program for people who are incapacitated and unable to work for at least 90 days.

“I believe that this budget disproportionately impacts some of the neediest in our state,” Ranker said.

Republicans would also achieve savings by making eligibility changes to the state’s welfare program and a child care program for low-income families. The budget also calls for reduced supervision of former prison inmates in the community.

“Republicans unveiled a budget that protects the wealthiest at the expense of those who already are struggling for a seat at the table,” she said in a statement Tuesday morning.

Braun defended his approach and challenged Democrats to actually pass the taxes they believe are necessary.

Senate Republicans plan to pass their budget later this week.

Majority Democrats in the Washington House are expected to unveil their budget next week. That will set the stage for negotiations between the two chambers. But whether the two sides can get a deal by April 23 when the session ends is a very big question mark.