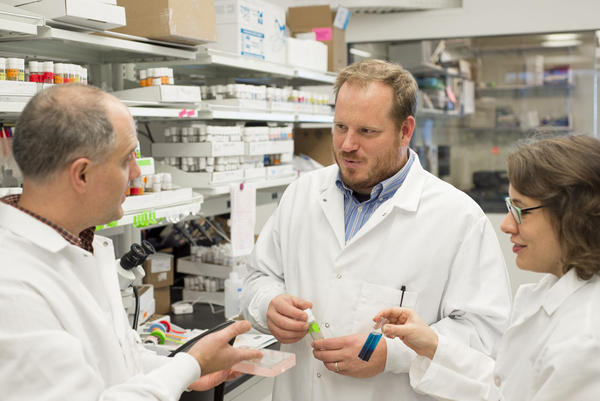 If you have trouble getting a good night’s sleep, it could be in your DNA. A team led by Washington State University-Spokane researchers has discovered a gene that influences the quality of sleep across species.

The study started in mice, where the researchers identified a particular gene which when knocked out disrupted sleep. Then the findings were replicated in humans.

Participants in a sleep study in Japan in whom this gene was naturally mutated slept worse. Then the medical researchers spliced the normal and mutated genes into fruit flies and saw the same results. The results appeared in the journal Science Advances on Wednesday.

Assistant Research Professor Jason Gerstner led the study at the WSU College of Medicine in Spokane.

“Because we’ve observed disruption in sleep with this one gene throughout all these different species, it speaks towards something old, ancient, sort of fundamental,” he said.

Gerstner said colleagues doing pharmacy research could develop therapeutic drugs based on the discoveries. But he said there’s still a long way to go before this could help you sleep better.

“We still don’t fundamentally understand as scientists why we sleep. This is a major biomedical research question,” Gerstner said in an interview Wednesday. “So that got me hot on the chase.”

The gene Gerstner’s team described controls production of a protein dubbed FABP7 found in glial cells in the brain. The researchers observed that the mice with that gene knocked out slept more fitfully than mice with the normal gene.

Human study subjects with a mutated FABP7-controlling gene slept the same duration as others, but woke during their slumbers more often producing fragmented, lower quality sleep.

The past president of the Sleep Research Society, University of Washington Professor Mark Opp, credited the WSU researchers with producing “an important paper” because they shone a light on another part of the brain besides neurons, which he said have been the focus of other researchers in the field.

“It’s not a huge leap to the moon, but it’s a major advance in the field,” said Opp, who was not involved in the study. “It sets the stage… It starts to contribute to a change in how we view sleep.”

”Genetics are certainly an important feature of sleep,” Opp said, while noting many other factors can influence how soundly you snooze. Stress and lifestyle choices also have important influence. He said some factors may be outside our control such as shift work assignments. Others are modifiable, such as how we eat and exercise and what time we choose to go to bed.

”How we choose to live our lives often has a bigger impact on sleep quality than maybe some of the genes we inherit,” Opp cautioned.

Gerstner said the gene his team studied and the protein it regulates may play a role not just in sleep disorders, but also in common neurological ailments such as Alzheimer’s disease. Gerstner’s lab also works on the pathology of Alzheimer’s.

The National Institutes of Health and several other grant makers funded the “sleep gene” study, which also involved researchers from the University of Pennsylvania, University of Wisconsin-Madison and several Japanese institutions.