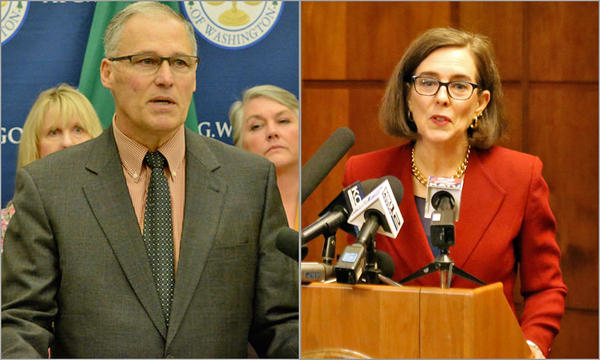 The Democratic governors of Washington and Oregon are condemning the Republican vote in the U.S. Congress to repeal and replace the Affordable Care Act.

In Washington, Gov. Jay Inslee issued a blunt statement calling it “a shameful day in American history.” He warned that 700,000 Washington residents could lose health care if the Republican plan became law.

Republicans in Congress have voted to strip health care coverage from 700,000 Washingtonians. My full statement: https://t.co/wdK1anIujZ

“People need to understand what’s going on here,” Inslee said. “It is the old switcheroo of favoring tax cuts for the rich over the healthcare of the working people in Washington and I find that outrageous.”

In Oregon, Gov. Kate Brown said a rollback of Obamacare would jeopardize health care for 350,000 Oregonians. She said the effects would be catastrophic in rural parts of the state and for the disabled, elderly, poor and chronically ill.

Today’s #AHCA vote was irresponsible and shortsighted. I call on Congress not to turn their backs on working families and rural communities.

All of the Democratic members of Congress from Washington and Oregon voted no on the American Health Care Act. The Republicans split with Washington’s Dave Reichert and Jaime Herrera Beutler voting no and Cathy McMorris Rodgers of Washington and Oregon’s Greg Walden voting with the majority in favor.

McMorris Rodgers called the vote “historic” and said, “For the millions of Americans who have been struggling to find affordable, reliable health care coverage … this is a victory.”

Inslee said he’s hopeful the bill won’t make it through the U.S. Senate, but said opponents “must remain engaged” on the issue.

The bill would eliminate the 2014 expansion of Medicaid that states like Oregon and Washington embraced.

It would also replace the current tax credits used to purchase individual health care plans on state exchanges with tax credits based mostly on age instead of income.

Both Brown and Inslee credit the Affordable Care Act with driving down the rate of uninsured in Oregon and Washington to under 6 percent.