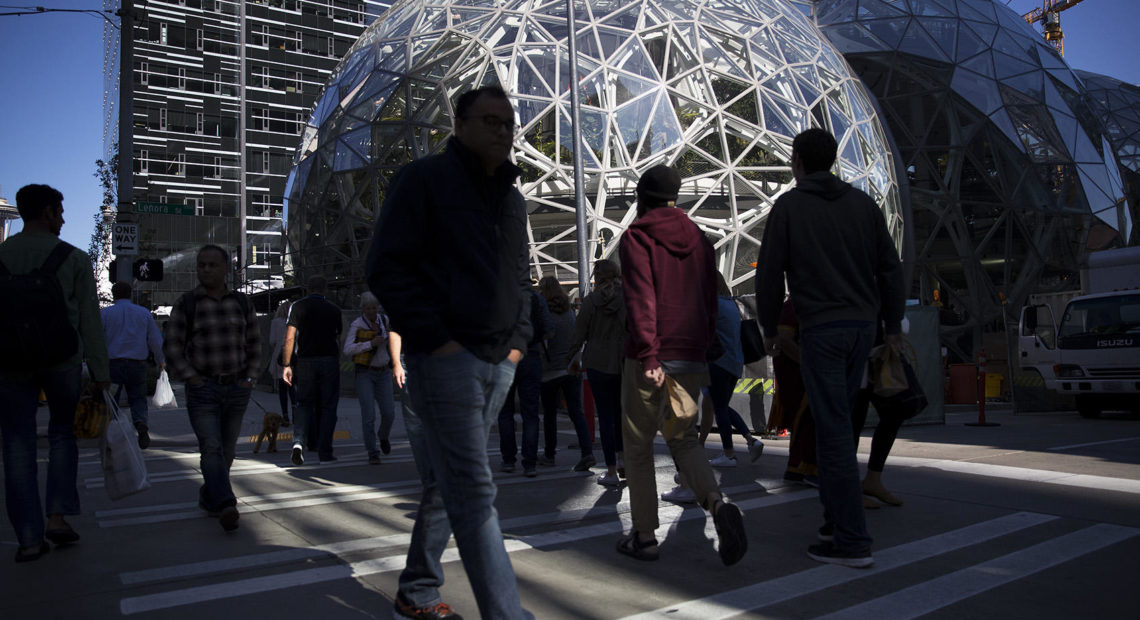 What Amazon Doesn’t Want You To Know About The Cloud

Carbon emissions by the tech giants that dominate cloud computing are surging, even as companies like Amazon and Microsoft take steps to tame their climate impact.

The Seattle-area competitors — two of the nation’s largest electricity consumers — take different approaches to their clouds’ carbon problems. One favors sunshine; the other, secrecy. Internal documents obtained by KUOW break through that secrecy.

A decade ago, the skyrocketing energy use of the data centers that serve up our emails, movies and social media set off alarm bells for environmentalists. The centers’ electricity consumption nearly doubled in just the first five years of the 21st century. More internet use seemed to inevitably bring more pollution.

But more recently, the cloud’s need for power has plateaued, even as the world’s hunger for data keeps growing. Since 2010, U.S. data centers’ electricity use has only been going up about 1 percent a year.

“We’ve seen a lot of new, large, very efficient data centers coming in, like the ones with Google or Amazon,” said research scientist Arman Shehabi with Lawrence Berkeley National Lab in California.

Shehabi studies the energy behind the internet, especially in big, “hyperscale” data centers.

“While they’ve been providing new services that weren’t available before,” he said, “they’re also supplanting the services that were being provided by small, very inefficient data centers that are scattered throughout office buildings in the country.”

The audio and notes for this story are housed in a room-sized data center at KUOW. Small data facilities like that tend to be an order of magnitude less efficient than the Walmart Supercenter-sized server farms that this web article lives on, under NPR’s contracts with Amazon Web Services and other cloud providers.

When it comes to energy, more efficient means less polluting. In large data centers, it takes less energy to keep each computer server cool, and it’s easier to avoid having “zombie” servers that run while they’re not in use. They also have a bigger incentive not to waste energy.

The already high energy toll of the cloud — currently 1.8 percent of U.S. electricity consumption — could shoot up again once the less-efficient server farms (“clunkers,” as Shehabi calls them) have been retired.

Shehabi said the big players like Amazon, Microsoft and Google that have come to dominate the cloud need to use their market power for a greater good: getting the internet’s dirty energy use down from the climate-harming plateau it’s on.

“With that power, there’s a responsibility to push the utilities to reduce the carbon emissions from their electricity generation,” Shehabi said.

To varying degrees, the main players in the cloud say they are doing that, even as their energy consumption keeps ballooning.

“We’ve taken steps to operate our business consistent with what the planet needs to avoid catastrophic climate change,” said Elizabeth Willmott, who runs the carbon program at Microsoft. “And we’re committed to doing our part.”

Microsoft’s emissions have been rising as its cloud business grows: Carbon emissions shot up 56 percent from 2015 to last year, according to data the company publishes regularly on its environmental performance.

Microsoft has purchased enough offsets and credits — basically, paying others to counteract its carbon pollution — to claim to be carbon neutral since 2012.

In November, Microsoft announced it would make steep cuts to its own carbon emissions — steeper than most governments, even the ones like Seattle that call themselves national leaders on climate change, have promised to make.

Microsoft has adopted a carbon-cutting tool that has eluded climate activists and even the governor of Washington: It slapped a carbon tax on itself.

Willmott said, by making polluting activities more costly and providing funds for green projects, the carbon tax has changed the way the whole company operates and even travels.

Emissions from the company’s air travel have decreased 2 percent from their peak a decade ago, with pollution per traveling employee dropping 10 percent.

“Skype and teleconferencing have been a big driver of reducing that air travel,” Willmott said.

Atop the cloud: Amazon

Microsoft is more open about its efforts to combat its rising energy use and pollution than the biggest player in the cloud.

Amazon Web Services, which brought in $1.3 billion, or 64 percent of Amazon’s operating income, last quarter, often publicizes its use of green energy. In a drone video from October, the world’s richest man, Amazon CEO Jeff Bezos, christens a Texas wind farm while he’s harnessed to the top of a 300-foot-tall wind turbine.

But Amazon reveals almost no information about its ever-increasing use of dirty energy, like coal and gas.

According to company projections made in 2015, Amazon Web Services’ electricity use was expected to triple from 2014 to last year (from 2.4 million megawatt-hours to 7.2 million).

That’s nearly as much electricity as everyone in Amazon’s hometown of Seattle uses (7.7 million megawatt-hours in 2016), according to the local utility, Seattle City Light.

It’s also enough to emit 3.3 million tons of carbon dioxide, according to Amazon’s internal figures. Much of the Amazon cloud is based in places like Virginia and Japan that, unlike Seattle, rely heavily on fossil fuels for their electricity.

Amazon has been purchasing solar and wind farms to tame its growing carbon footprint. In all, company projections had Amazon Web Services buying enough green power to keep 700,000 tons of carbon dioxide out of the sky. Even so, its carbon emissions were expected to double in just three years. 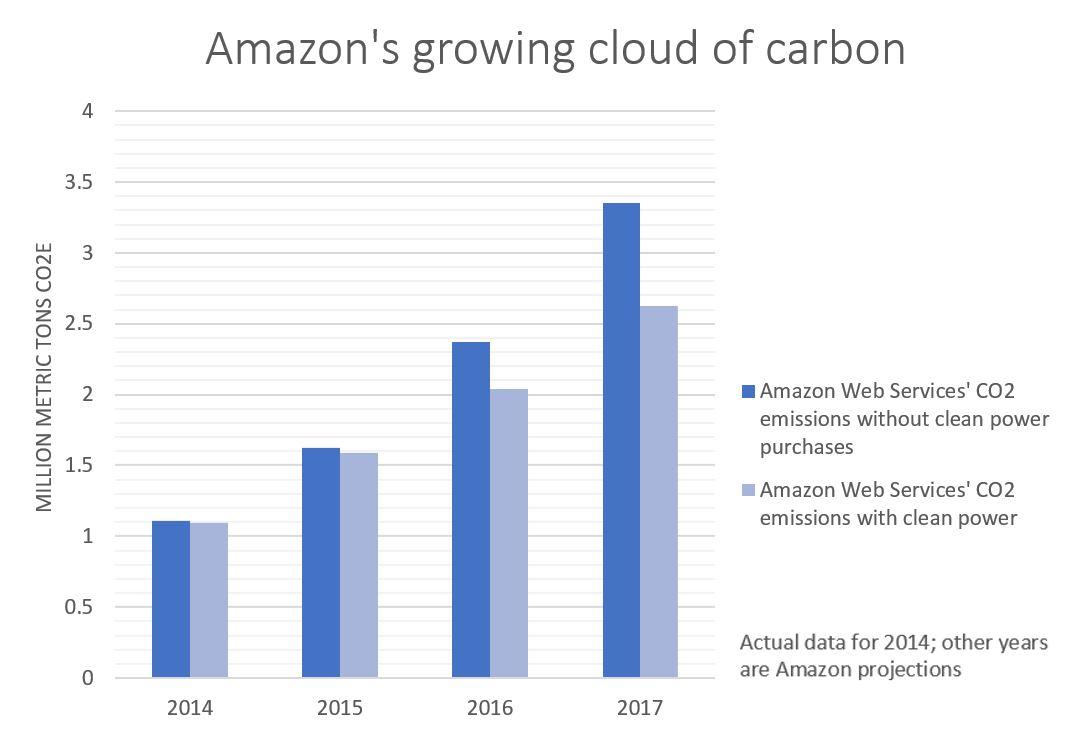 Cook watches the energy consumption of the tech sector. He estimates data centers’ electricity use by poring over the local permits they have to get for backup diesel generators.

“Amazon is growing in places where the grid is quite dirty,” Cook said.

Places like Virginia, where Amazon has more data centers than anywhere else.

“The grid in Virginia is about 2 to 4 percent renewable on a good day,” Cook said.

How accurate Amazon’s projections from 2015 turned out to be for its rapidly growing cloud business, we don’t know. The company’s energy use and pollution impacts are tightly held secrets. 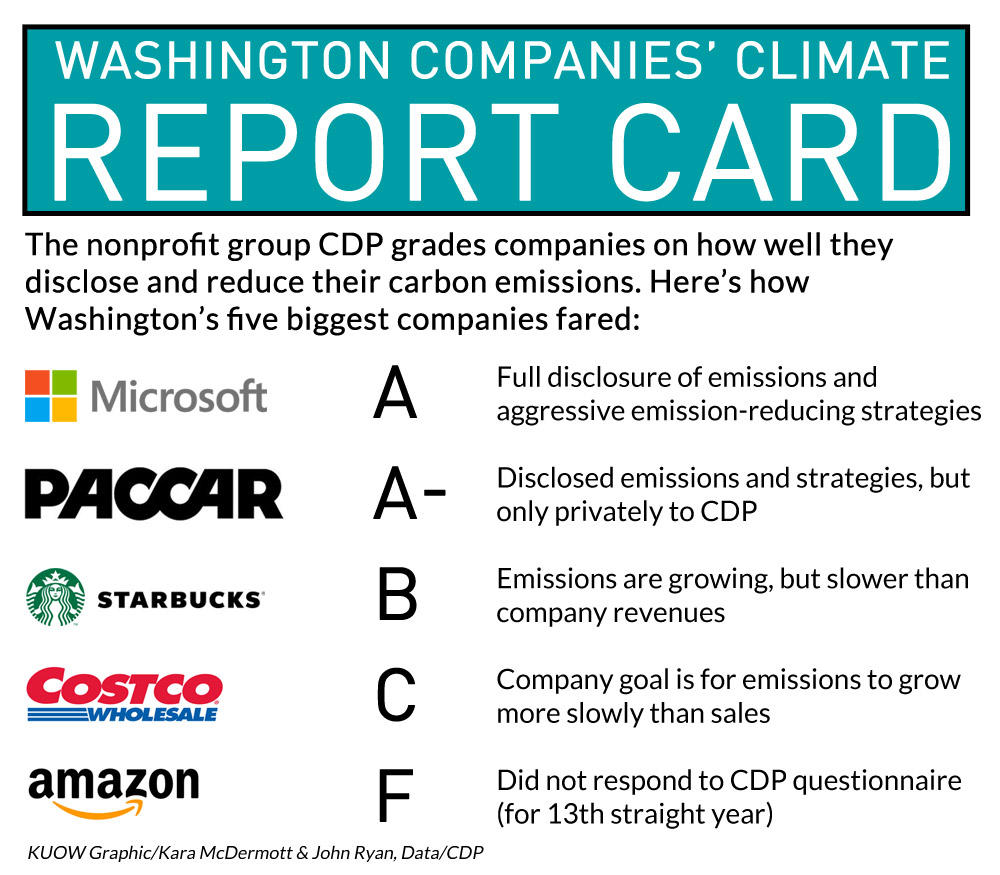 On Thursday, Amazon reported that its cloud business grew 43 percent in 2017.

Amazon spokespeople declined to comment on the company’s energy use, except to say that they do not yet know whether Amazon Web Services achieved its goal of getting half its electricity from green power by the end of 2017.

Amazon Web Services claims to have used 40 percent renewable power in 2016, including non-renewable but low-carbon-emitting nuclear power in that claim. It is unclear whether that claim accounts for power consumed by the dozens of “colocation” data centers around the world that Amazon uses but does not own.

Amazon Web Services has a goal of, some day in the future, getting all electricity for its data centers from renewable sources.

The company quietly expanded that goal-without-a-deadline last fall to apply to all of Amazon’s operations, from warehouses to delivery trucks. It has declined multiple requests from KUOW to provide more detail.

“Amazon is surely among the most transport-dependent businesses in the world; we need to know that it’s doing all it can to minimize emissions,” climate activist Emily Johnston with the group 350 Seattle said in an email. “It ought to be pioneering the use of electric trucks.”

Both Amazon and Microsoft have been less ambitious in their pursuit of green energy than Google has. Google is still tallying its 2017 energy figures, but spokesperson Amy Atlas said the company expects to have bought enough green energy last year to run all of its operations.