These Images Were Captured Nearly 3.8 Billion Miles From Earth

At first glance the images are unremarkable. They’re grainy, ill-defined, seemingly more akin to television static or an 8-bit video game than they are to the high-resolution masterworks sent back by the Hubble Space Telescope.

But take another look.

NASA’s New Horizons spacecraft captured these images at a distance of 3.79 billion miles from Earth — the farthest from our planet an image has ever been made. In a span of just a few hours on Dec. 5, the craft trained its camera first on the glittering “Wishing Well” star cluster (seen below) and then on two objects in the Kuiper Belt (seen above), the huge band of rocks and dwarf planets that rings the outer fringes of our solar system. 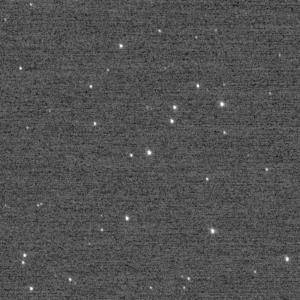 For a short time, this New Horizons Long Range Reconnaissance Imager (LORRI) frame of the “Wishing Well” star cluster, taken Dec. 5, was the farthest image ever made by a spacecraft, breaking a record set by Voyager 1. About two hours later, New Horizons broke the record again. CREDIT: NASA

“And now, we’ve been able to make images farther from Earth than any spacecraft in history.”

In so doing, they also broke a record that had stood untouched since 1990, when the Voyager 1 spacecraft sent back a final glimpse of Earth before its cameras went dark. That shot — which was, in fact, part of a composite of 60 images — came to be known as the “Pale Blue Dot,” famously memorialized by Carl Sagan for depicting Earth as “a mote of dust suspended on a sunbeam.”

That image was made at a vantage point of 3.75 billion miles from Earth. 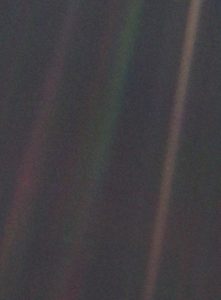 This color image, known as the “Pale Blue Dot,” is part of the first-ever portrait of the solar system, which was taken by Voyager 1 in 1990. See that tiny dot caught in the middle of the rightmost beam? That’s us: all of us. CREDIT: NASA

It’s not the first time New Horizons has managed an unprecedented feat.

Launched in 2006, the piano-sized spacecraft made worldwide headlines in 2015, when it made a flyby of one of its principal subjects of investigation: Pluto. In the process, it sent back vivid, high-definition images of the distant world, which for decades had appeared as little more than a smudge to even the most advanced telescopes on Earth.

“With New Horizons, all that has changed,” NPR’s Geoff Brumfiel reported at the time.

“Scientists can now see craters and regions of dark-reddish ground. A large, white, heart-shaped feature on the equator is made of ice, though Pluto is so cold it’s probably an ice of nitrogen or methane, rather than water. A new close-up of a small region on Pluto’s surface also reveals towering ice mountains, up to 11,000 feet high.”

The probe then turned its attention to the distant Kuiper Belt. There, NASA says it plans for New Horizons to make flyby investigations of at least two dozen objects, such as “dwarf planets and ‘Centaurs,’ former [Kuiper Belt objects] in unstable orbits that cross the orbits of the giant planets.”

“Mission scientists study the images to determine the objects’ shapes and surface properties, and to check for moons and rings,” the space agency says. “The spacecraft also is making nearly continuous measurements of the plasma, dust and neutral-gas environment along its path.”

For now, though, New Horizons is now enjoying some well-deserved hibernation as it hurtles away from us at a rate of roughly 700,000 miles a day. NASA says mission controllers will “bring the spacecraft out of its electronic slumber” this coming summer in anticipation of its next major close encounter, with an object known as 2014 MU69 on Jan. 1, 2019.