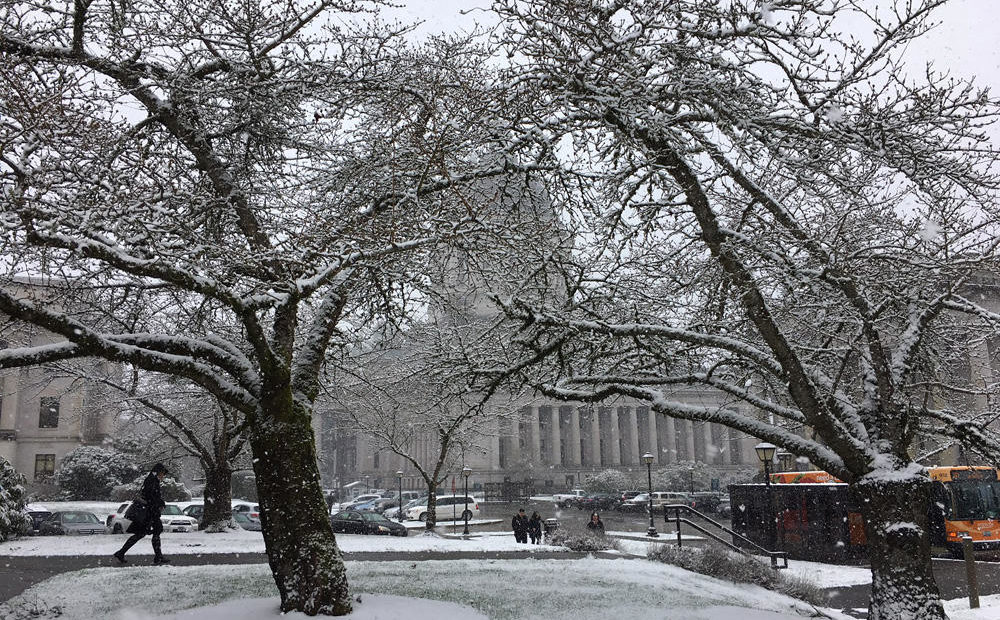 The tax proposals were included in a proposed update to the state’s two-year operating budget and came one day after Senate Democrats proposed a more modest property tax cut with no capital gains tax.

Some Washington homeowners are experiencing sticker shock this month as they receive new property tax bills. Last year, a divided legislature voted to increase the state property tax levy by more than 80-cents per $1,000 of assessed value in an effort to comply with a Washington Supreme Court ruling on school funding. A corresponding reduction in many local levy rates won’t kick in until next year.

“I fear that people will lose their homes over what we did,” said House Finance chair Kristine Lytton.

Under the House Democrats’ proposal, the current state property tax levy would drop 40 cents from $2.70 per $1,000 in assessed value to $2.30 per $1,000 by 2020. To offset the lost tax revenue, the plan calls for taking $995 million from the state’s constitutionally protected rainy day fund. That would require a three-fifths vote of the Legislature.

To turn that one-time savings into longer-lasting property tax relief, House Democrats would impose a new 7 percent tax on capital gains over $25,000 for an individual or $50,000 for joint filers. The sale of a residential home or retirement assets would be exempt.

Lytton said a tax on a small number of wealthier Washingtonians would be fairer than a broad-based property tax.

“Those 48,000 that are going to pay the excise tax on capital gains, I don’t believe any of them will lose their homes over this.”

House Democrats said their goal would be to get the state property tax levy down to $2.20 per $1,000 of assessed value, but that would depend on how much money the capital gains tax brought in.

Opponents argue a capital gains tax is volatile, question whether it’s constitutional and say it’s a first step to having a state income tax.

“Other states have started with a capital gains income tax only to shortly thereafter switch to a full income tax … which as we know has been very unpopular amongst the citizens of the state of Washington,” said House Republican leader Dan Kristiansen on Tuesday.

This isn’t the first time House Democrats have proposed a capital gains tax. But they hope it has a better chance of passing this year because Democrats once again control both chambers.

“We feel confident we have the votes out of our chamber,” Lytton said. “So we plan on passing it out of the House.”

Previously, Senate Majority Leader Sharon Nelson has said she didn’t have the votes in her caucus to pass a capital gains tax. Senate Democrats did not include the tax in their budget proposal that was released on Monday. However, that budget did include a more modest one-time property tax cut of approximately $400 million.

“Revenue is up because our state’s economy continues to surge, driven in large part by the Puget Sound real estate market,” said Senate Ways and Means chair Christine Rolfes at a news conference on Monday. “This revenue windfall offers us a rare opportunity to help Washington state households with property tax relief.”

Minority Republicans, who have proposed their own property tax relief measures, were quick to criticize the Democrats’ approach because it doesn’t kick in this year.

“2018 is where the impact is going to be felt the greatest,” said Sen. Sharon Brown. But Democrats say with 2018 property tax bills already calculated it’s too late to implement a tax cut any sooner than 2019.

Another major difference between the House and Senate budgets is how they respond to a Washington Supreme Court order to fully fund K-12 salaries. Last November, the court issued a unanimous order that said the state must come up with an additional $1 billion by this September to cover the cost of teacher and staff salaries.

Senate Democrats in their budget propose to dedicate $972 million to address this order. But House Democrats do not. They insist the current phase-in of money to cover salaries is appropriate. Instead, House Democrats say lawmakers should listen to school districts that want more money for programs like special education.

“Our focus has to be on school kids and when we went around talking to districts last year, it was those investments in helping kids to be successful, especially those kids that are struggling right now,” said House Majority Leader Pat Sullivan.

In a briefing with reporters, House Democrats rejected the idea that their approach would invite tougher sanctions from the court. Currently, the state of Washington is in contempt of court over school funding and accruing a $100,000-a-day fine.

Despite their differences, there are plenty of areas of agreement between the House and Senate in their proposed supplemental budgets. For instance, both budgets propose to put an additional $300 million over the next four years into the state’s struggling mental health system.

There’s also money in both budgets to address the backlog of college students who qualify for a state need grant, but can’t get one because there’s no money available.

Both chambers plan to quickly pass their budgets this week. That will set the stage for budget negotiations to take place over the next three weeks leading up to a scheduled March 8 adjournment of the Legislature.

“While we approach some of our state’s challenges in different ways, I’m confident we can work together in the next few weeks to deliver a balanced budget on time,” said Rolfes, the Senate budget chair.