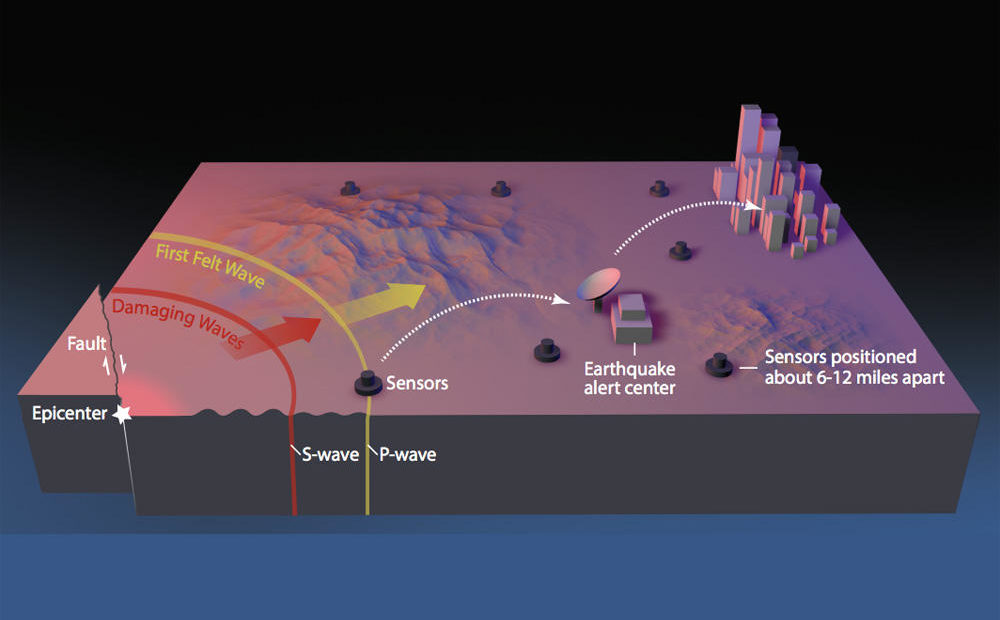 An earthquake early warning system under development for the West Coast gets a major boost in the new federal budget that President Donald Trump signed into law Friday.

President Trump’s original budget proposal for 2018 zeroed out funding for earthquake early warning. But Congress dramatically reversed that. The new federal budget increases spending to build a warning system to $23 million this year, more than double the $10 million that the U.S. Geological Survey got for this last year.

“Thinking about warning times, we’re talking about seconds, tens of seconds. The best case scenario is a few minutes,” Allen said. “We should be thinking about how we can react with warnings of a few seconds.”

The system designers say a short advance warning could be used to open fire station doors, slow down trains, pause surgeries or stop and open elevators at the next floor.

Down the road, the general public will be able to get alerts to drop, cover and hold on via a smartphone app, TV screens and other connected devices.

Allen said the new funding for the earthquake warning system will pay for things like additional sensors and for fine tuning the software to automatically detect damaging quakes and issue alerts. At this point, the system has about half of the desired seismic stations in place, which will eventually encompass a wide network of more than 1,000.

USGS and partner institutions including the Pacific Northwest Seismic Network, University of Washington, University of Oregon and UC Berkeley have trademarked the name ShakeAlert. The prototype has successfully alerted researchers to moderate earthquakes before shaking reached their locations.

A social science committee continues to study and tweak the interface to figure out how best to convey a useful warning and educate users to respond appropriately.

“The (prototype) system is running very well in regions that have stations that are pretty dense already, which is primarily the urban areas up and down the West Coast,” Allen said. “I’m very excited about the possibility of the limited public rollout later this year. I think the greatest challenge frankly, is fear of screwing up.”

“The system might make a mistake and people are very concerned about that,” Allen explained. “It is good to recognize that, but I think we really have to get past this.”

Allen said the early warning systems already in service in other countries such as Mexico are imperfect too.

“What we have learned from Mexico is that the receivers of the information, the public, they understand that there are technical limitations to these systems. They recognize that the system is not perfect, but they still see it as being valuable.”

Allen spoke during a webinar hosted by the National Academies of Sciences, Engineering and Medicine on Friday.

“I think overall the outlook is quite positive,” Melgar said. “With continued effort for Cascadia, we will have warnings for tsunamis in under five minutes.”