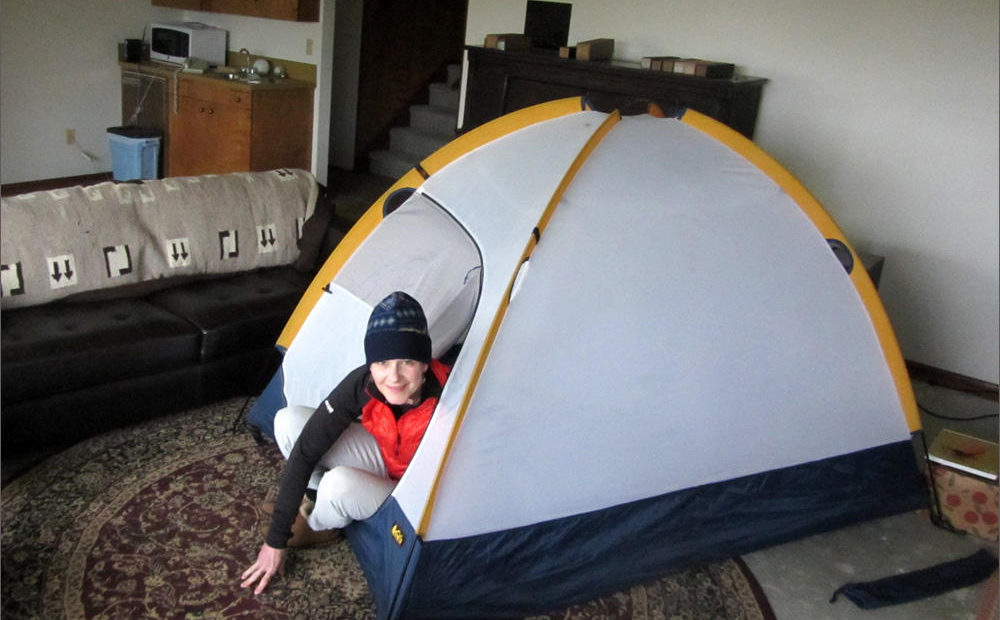 Camping At Home? Preparing For ‘The Big One’ Cascadia Quake In The Northwest

When The Big One happens, emergency planners and geologists expect the vast majority of us will survive. But a magnitude 9 rupture on the Cascadia earthquake fault will likely cut electricity, running water and sewer for weeks—or even months afterwards.

For Pacific Northwesterners, daily life could resemble a really long camping trip without leaving home. An emergency preparedness evangelist is feeding a hunger for tips on how to be a happier camper in this situation.

Jim Buck is a former Republican state representative and retired structural engineer. He and his wife live near the edge of the continent, out past Port Angeles, and past the no stoplight hamlet of Joyce on Washington’s Olympic Peninsula.

Buck figures help will take a long time to reach his area after a major earthquake.

“No matter how you skin it, you look a look at Indonesia, Japan, Hurricanes Katrina and Sandy, the rest of them, it takes you a week to figure out that you got punched in the mouth really, really bad,” Buck said. “It takes another week to get the stuff together to bring to make you feel better. And then it takes a week to unload it.”

Buck thought it over and recognized the best place to hunker down may be at home, provided it’s habitable. Then he researched a “how to” presentation to share with his neighbors, now titled “Camping in Your House.”

The talk has turned into a high-demand hit. He said he’s given it about 50 times over the past two years.

At a recent talk in a church basement in Port Angeles hosted by the Interfaith Community of Clallam County, Buck briskly ran through his indoor camping and survival tips. First, you may need to patch damage to your dwelling and remove hazards that could fall during aftershocks. Good items to add to your emergency kit include duct tape, plastic snap ties and a blue tarp.

“Blue tarps are the national flag of Joyce (the town). We fly them proudly,” Buck said to chortles from the audience.

If The Big One happens in our cold season, he suggests pitching a tent inside to provide a warmer space to rest. You’ll also want some means to purify water. Plan on some sanitary way to collect and dispose your poop.

Buck’s wife Donna often chimes in next with tips about foods that are easy to heat on a camp stove or backyard campfire.

“We have a sheet that says, ‘Survive Cascadia on a dollar a meal,’” she said.

Her husband said you will be the post-disaster royalty of the neighborhood if you are capable of making slow-cooked dinners in a Dutch oven on the coals of a campfire. 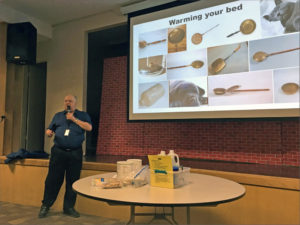 Similar advice is propagating through volunteer neighborhood preparedness teams down the Washington and Oregon coasts. They all share the prospect of being isolated by collapsed bridges and landslides for a long time after a Cascadia megaquake. Emergency shelter capacity will be limited, so if you can survive on your own, you’ll do yourself and those who have no other place to go a big favor.

Buck said you probably have most of what you need already and don’t need to go out and spend a whole bunch of money.

“If you think about, you have done this every time there was a power failure for your entire life,” he said. “It’s nothing new. If you put some forethought into it, you can greatly improve your post-Cascadia camping experience.”

People in the audience had good attitudes about getting ready for that experience. Barbara Mitchell moved to the Northwest from the Midwest nearly eight years ago.

“When I first heard about the Cascadia subduction zone, it was terrifying,” she said. “Just like, ‘Oh my God, I’m moving out of the area. I’m not going to do this.'”

But Mitchell said she’s come around to living with the risk in Port Angeles.

“One of the comforting things for me was to hear from the top level, from FEMA down, what the plan is,” she said. “You know, this is how long it’s going to take. This is what you need to be prepared for. This is what we’re going to do. We’re going to start at the airport and build out from there.”

“You can panic and want to run away or you can just do it in small steps,” he said. “I think everyone can do it.”

These folks are prepping for 30 days on their own. For people in the I-5 corridor, emergency planners recommend to prepare to be self-sufficient for two weeks.

Along the Oregon Coast, Emergency Volunteer Corps of Newhalem Bay President Linda Kozlowski said preparedness for up to three months of isolation and limited resupply would be a good idea for people in her area of north Tillamook County.

“We are truly at the end of the road for access from the outside,” Kozlowski said in an interview Monday. “It’s just the way it’s going to be, so we need to be ready.”

Kozlowski said leaders of the volunteer group are developing a “training module” to help area residents shelter in place after a catastrophic earthquake. EVCNB plans to give recurring presentations with the basics beginning this September. The summary brochure, which is ready now, covers much of the same ground as Buck’s camping at home talk.

The next presentation by the Bucks about “Camping in Your House” takes place in Sequim, Washington, on April 11 at the Sunland Golf and Country Club ballroom. Two days earlier, Jim Buck will be in Olympia to receive a Governor’s Volunteer Service Award for extraordinary volunteerism. He was nominated by Clallam County’s Division of Emergency Management for outstanding efforts to prepare his community for disaster.

The offshore Cascadia subduction zone stretches about 620 miles from Vancouver Island to northern California. Geologists have found evidence that this fault boundary generates a major earthquake in the magnitude 8 to 9 range roughly every 200 to 1,000 years. The last Cascadia megaquake happened in the year 1700. That rupture also generated a damaging tsunami.

The shaking intensity diminishes with distance from the offshore fault, but the predicted duration of rattling and rolling of between two to five minutes may exacerbate destruction.