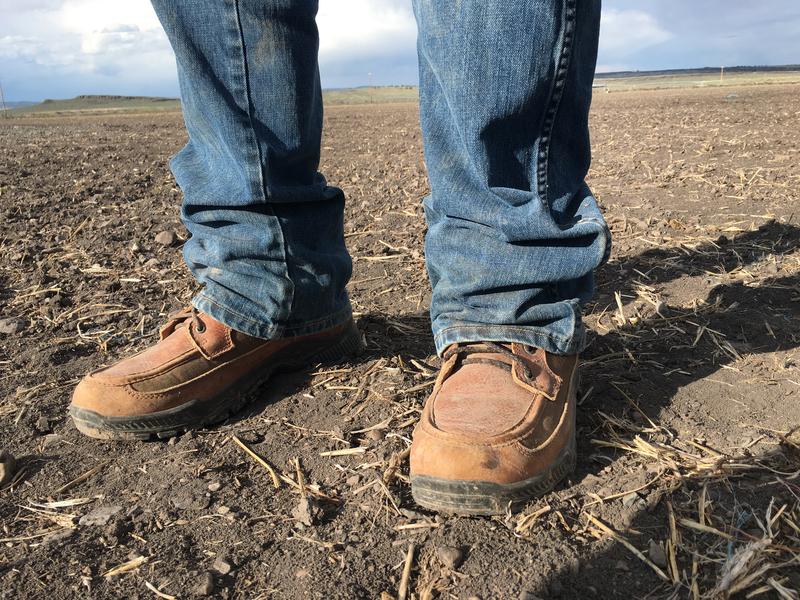 ‘This Is Not Normal.’ Eastern Oregon Ranchers Struggle With Deepening Drought

In the shadow of remote Dry Mountain, branding is the only way to guarantee a fair sorting of cattle between ranchers in the fall.

Animals’ ear tags can rub off in the rough, sage-studded country. So each year, before cattle are let out to graze on summer range, the young are branded, castrated and vaccinated. Neighbors gather in the early morning to do the work.

Between the sizzle of the irons on fresh hide, the worried talk among these neighbors is deepening drought. The low snowpack, few spring storms and thirsty cattle add up to trouble here and across the West.

“This is not normal for what we normally have here,” said Wayne Evans, the owner of the ranch. “This is a lot drier.”

Evans is part cowboy, and all-business. His profits are tied to rain and snow. In a good year, there’s little rainfall here, around 11 inches average.

‘Not enough to get your feet wet’

On an afternoon tour of his spread, Evans points to irrigation water trickling from a culvert.

“That will be dry in two weeks,” he said.

And that’s the problem. This ditch is nine feet deep. Last year it was so full that water was flowing over the road. But this year, light snowfall, fewer storms and warm spring days have brought one of the worst droughts Evans has seen.

Oregon has already declared drought in several counties, and two more counties are under review by the governor’s office. That’s a common theme– drought is stretching across the Western United States.

And this drought is going to cost Evans. He’ll have to truck in water for his cattle to drink and expensive hay for them to eat. 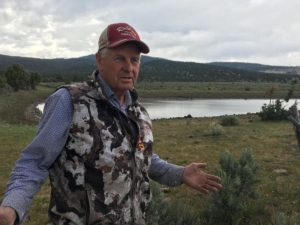 Southeast Oregon rancher Wayne Evans says he’ll make it through this short water year, but because he’ll it could cost him as much as $100,000 in lost hay, lost weight on his calves at sale time from short grass and diesel, and equipment for hauling water to his livestock. CREDIT: ANNA KING/N3

Down the road, Evans stops at a waterhole his cattle use in spring and fall. He says it’s usually full

now. But not this year.

“You could ride a horse across there and wouldn’t even get your feet wet,” Evans said with a grim chuckle.

Evans has about 50 waterholes, and most of them are dry. That means he’ll need to hire someone to truck 8,000 gallons of water up to his cattle in the mountains every day. He’ll pay for the diesel, a full-time employee, constant repairs to the truck and at least 10 big, expensive tires.

On top of all that, when cows have to walk farther for water and they have less grass to eat, they produce less milk for their calves.

“So when those cows don’t milk,” Evans explained, “those young calves don’t grow like they should.”

Lighter calves means that at this winter’s stock sale, Evans could make $60,000 less than in a good year.

Multiply that by all the potential losses of cattle ranchers in Harney County and ranchers in the rest of Oregon—it’s a hit to the number two agricultural group in the state.

And Evans already sees signs that his water problems might stretch beyond this year. The aquifer here is stressed, and the state has imposed a moratorium for new ground water rights for the Greater Harney Valley area. Fact is, many Western aquifers, wells and rivers are declining or coming up dry.

He’s leading a large study of aquifers in the West including in eastern Oregon. Burns said the volcanic rock and soils here don’t store much groundwater.

And he said in places like this, 90 percent of the water is used for agriculture.

“So, when you want to think about how you want to use your water—as a state, as a people, as a community—agriculture has to be a part of that discussion,” Burns said.

He said lawmakers and communities will have to make hard choices: Do they want more agriculture, city growth, wildlife or industry?

DEPENDING ON YOUR NEIGHBOR

The deepening drought in eastern Oregon is also causing some tension between neighbors over water. The antiquated way that water is shared in the West doesn’t help.

Just outside of Burns, a cowboy-hat-clad couple has been roping and riding together for 37 years. After more than eight hours in steep mountains chasing cattle, Katie and Keith Baltzor sit down at their broad kitchen table. They run about 300 head of Angus mother cows over hundreds of acres of their land and thousands of acres of leased public rangeland. 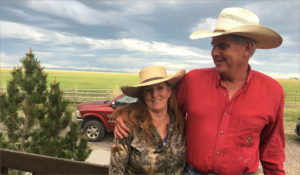 Katie and Keith Balzor say you have to be part gambler to ranch anymore, but it’s what they love to do. They’ve been ranching together since they got married 37 years ago.
CREDIT: ANNA KING / N3

The Baltzor’s operation really depends on snowpack—the melting water comes down the mountain into the Silvies River and then gets diverted into ditches, soughs and fields. That gives cattle something to drink but it also grows hay and pasture grass for them to eat.

And for the Baltzors, this short water year hurts.

These ranchers shouldn’t really be worried about water. They have what’s called a senior water right. That means they own a share of water that flows into this basin. Their share dates back to 1886, so it gives them one of the front spots in line.

But the drought this year is so bad that even with a senior water right they can’t get enough. The water originates far away from their farm and much of it is used up before it even gets to them.

It’s kind of an honor system. Neighbors have to cooperate to divvy up the water.

“We’re fortunate that we have some really good neighbors that work well with us and communicate,” she said. “And then unfortunately there are some that just put boards in and not want to let water come on through even if they have the same rights, priority date as we do. And that can be a frustration.”

Dealing with that drought frustration is Don “Dally” Swindlehurst. He’s standing on the Silvies River at a dam, about five miles out of Burns, that feeds the whole basin below.

“It can be challenging sometimes,” said Swindlehurst, the east region assistant water master for the state of Oregon. He’s a big guy, with a calm voice. His territory runs from Washington to Nevada.

But most of his time is sopped up in dry Harney County, where the challenge is there are no reservoirs—just snowpack and storms.

“Last year we had a really good snow year, we got most everybody watered who needed water,” Swindlehurst said. “But years before that we were in drought, and this year again we’re in drought.” 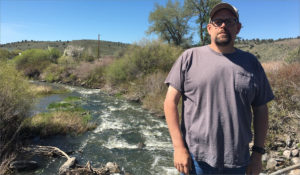 Don ”Dally” Swindlehurst has the un-fun job of shutting off irrigation water to ranches across much of Oregon. He says most people understand his role, but there have been a few times people got really mad. He works as a watermaster for the state of Oregon. He shows off the low flows in the Silves River about five miles north out of Bend, Oregon.
CREDIT: ANNA KING / N3

It doesn’t help that this is a very leaky system. The water off the Silvies River isn’t put into metal pipes. Water sloshes around in open ditches and scatters across fields. The ground acts like a thirsty sponge. Water can be absorbed before it gets to its intended destination.

Keith Baltzor said the short water season might cost him $37,000 on lost hay. He said this leaky system could be modernized, but he hopes it never is.

Baltzor said to pipe everything and create a tight system would ruin what makes up this way of life in Harney County.

“At this point the amount of money that it would take to do that would probably break most places [ranches],” he said.

And there is a beautiful benefit to all the complicated water woes. Shiney-feathered ducks ply some of the last remaining flooded fields. Reflections of clouds intermingle with barbed wire fences. And song birds swoop low across remote farm roads.

Thousands of migratory birds stop over here on their way north or south. The waterfowl munch the tender spring crop shoots.

And the Baltzors are glad they’re here.

THE LIFE HE WANTS

Back in his pickup, rancher Evans is still working at age 71. A keychain fashioned out of a bull elk tooth whacks back and forth as his F-350 pickup shudders down a federal Bureau of Land Management road.

Evans said it’s pretty stressful sometimes. But this is the life he wants.

“I’ve got my kids and my grandkids and I’m trying to leave something for them,” Evans said. “This is a great place to raise kids.”

A bit of rain could help. Almost on cue, a flash storm pelts his truck. Evans grips the steering wheel more tightly. The storm goes as quickly as it came—just enough to smear across the dusty and bug-splattered windshield.

“We need a lot of rain,” he said. “We don’t just need just a half inch of rain, we need several inches of rain to make it good.”

In minutes, the shower blows past and the dry winds pick up again.