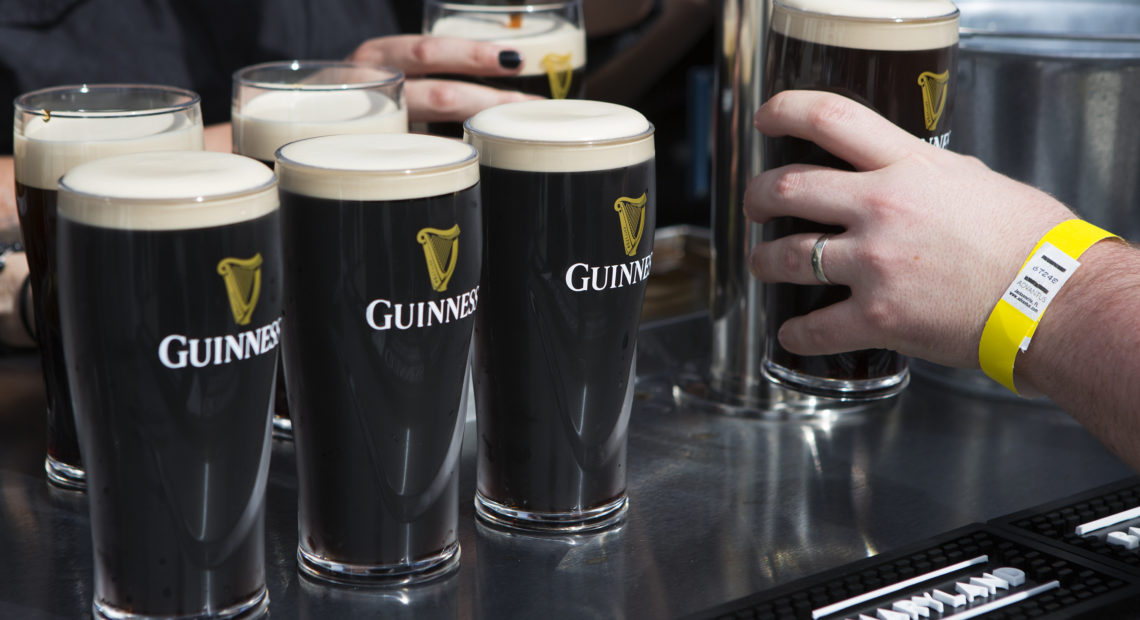 PHOTO: Pints of Guinness stouts are lined up at one of the outdoor bars. CREDIT: Emily Bogle/NPR

Guinness is famous for making stout beer – and this week, the Irish company opened a new brewery in Maryland. It’s the first time Guinness has had a brewery in the U.S. in more than 60 years. So: Does Guinness want to sell more stout to Americans? This time, it turns out, the brewer is trying something different.

First things first: Guinness will NOT be brewing its famous stout in America. To find out why, I asked Peter Simpson, the head brewer at the Open Gate Brewery in Dublin.

“I think Guinness stout is such an iconic stout, it has such strong links back to Dublin and back to Ireland, that it would feel wrong to take it away from Ireland and to brew it over here,” Simpson said in the new U.S. brewery. “So it is always going to still be brewed back in Dublin.”

As for the beers the Maryland brewery will make, most of it will be blonde lager – a beer that Guinness hopes will flourish in the U.S.

Guinness and its parent company, Diageo, spent $90 million to convert a large distillery into the Open Gate Brewery and Barrel House. The company’s hoping to attract 300,000 visitors a year.

The first barrel of beer was tapped this week — and visitors were let inside, to check out the place. It opened to the general public on Aug. 3 – more than 200 years after the first barrels of Guinness stout were delivered to America’s shores, back in 1817.

Guinness used to have a U.S. brewery — but it closed in 1954. The company had bet that Americans who served in Europe in World War II had developed a taste for stout. But there wasn’t enough demand, because drinkers here wanted something lighter, and crisper.

“At that time, America was so firmly a lager-drinking country,” says Theresa McCulla — who has one of the coolest titles in America: she’s the beer historian at the Smithsonian’s National Museum of American History. Or, to be more formal, she’s the historian of the American Brewing History Initiative. 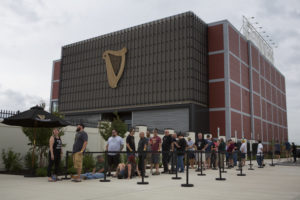 Visitors wait in line on the opening day of the new Guinness brewery in Halethorpe, Md. It’s the first time Guinness has had a brewery in the U.S. in more than 60 years. CREDIT: EMILY BOGLE/NPR

McCulla says that early on, Americans drank all kinds of beers, including ales and porters. But after German immigrants arrived in the mid-1800s, the U.S. fell in love with lagers.

Those German immigrants “used a different kind of yeast that sat on the bottom of fermentation vessels, they brewed under cooler conditions. It produced a beer that was very effervescent and refreshingly light,” she said. “And Americans were really entranced.”

That was true when Guinness came over in the 1950s – and it’s still largely true today.

Guinness is coming back to the States at an interesting time. Americans aren’t as thirsty for beer these days. Even the growth of craft beer has slowed down. And with more than 6,000 breweries, beer companies have to do more to win customers.

Bart Watson is the chief economist at the Brewers Association. He says that to bring a crowd to a brewery, you have to offer an “experience.”

“It’s certainly something now that we see being important to beer lovers, going and experiencing the brewery, learning about the beers, taking a tour — and also something that drives purchase decisions,” he says.

The Guinness “experience” includes a large lawn that’s shaped like an imperial pint glass. It’s big enough for around 4,000 people to hang out and listen to music.

Outside, there’s space for food trucks. Inside, there’s a taproom where Guinness stout from Ireland is poured next to beers from the experimental brewery downstairs. To run it all, Guinness has hired experienced brewers from respected craft beer companies, like Stone Brewing, Jolly Pumpkin and Highland Brewing.

Located about 10 miles from downtown Baltimore and 30 miles northeast of Washington, the Open Gate Brewery is tucked alongside an interstate, in an area that is by turns rural and industrial.

If it’s a success, the Guinness brewery is sure to make ripples in Maryland’s growing beer scene. At the opening ceremony, Brewers Association of Maryland President Cindy Mulligan, whose family runs Mully’s Brewery, suggested the new (old) kid on the block is already raising the state’s profile as a beer destination.

“The amazing and pretty unique aspect about the brewing industry is our philosophy that the rising tide raises all ships,” Mulligan said. “We welcome the brewing infrastructure and amazing talent that Guinness brings to Maryland’s vibrant beer industry. We’re looking forward to many collaboration and innovative brews to come.”

“I’m a strong advocate for new businesses, and as you can probably guess, as an Irishman — and maybe looking at the girth — I have enjoyed a few pints of Guinness in my time,” he said.

Hogan says he supports Guinness — one beer at a time. The folks at Diageo are hoping other Americans will follow suit.