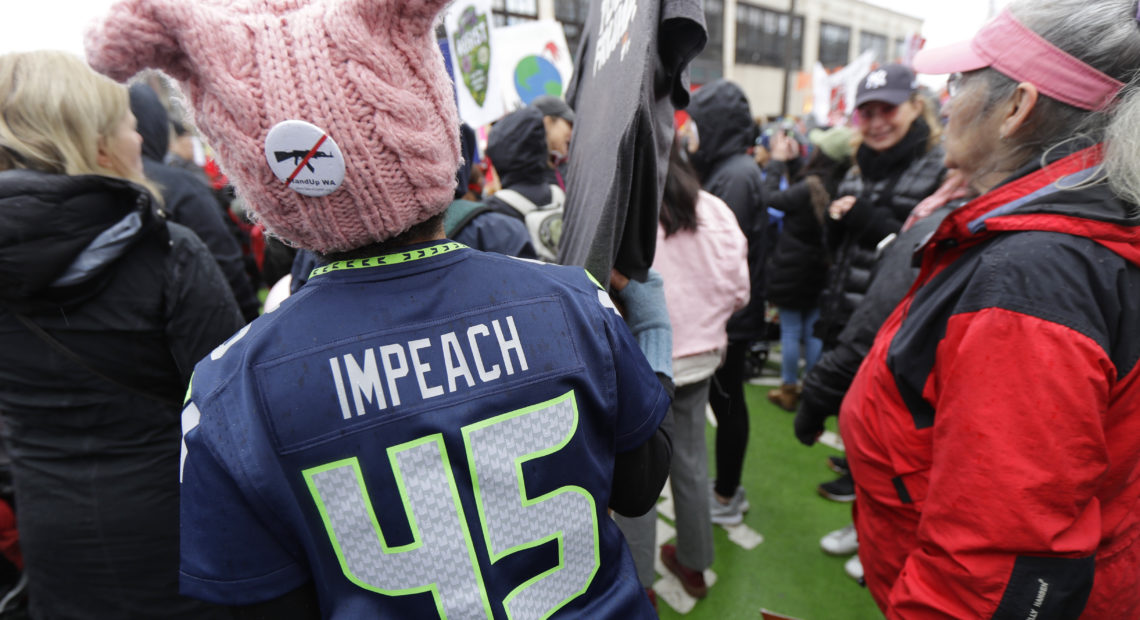 Across Washington, Election Framed As Choice Between ‘Trump Or Seattle’ Policies

In statehouse races across Washington this year, there are two potential boogeymen: President Donald Trump and the city of Seattle. Democrats are counting on an anti-Trump bump while Republicans are running against the liberal policies of the state’s largest city.

One place this is playing out is in the race for state Senate in the 30th Legislative District, which includes Federal Way. The contest features incumbent Republican Mark Miloscia, who’s seeking his second term, and Democrat Claire Wilson, who currently serves as president of the Federal Way School Board.

At a recent candidate’s forum hosted by the Federal Way Mirror newspaper, the two candidates faced off in a dimly lit golf course banquet room. The pair fielded questions on a range of issues from homelessness to guns to climate change. But it was a question about whether Washington should adopt a capital gains tax that revealed the stark contrast between the two candidates.

“We need to cut car tabs and property tax, not [be] raising new taxes to fund other programs, so I don’t support it at all,” Miloscia told the audience.

Wilson, however, embraced the idea.

“I support a capital gains tax, it’s something we must explore to help flip the regressive tax system that we have in our state,” Wilson said.

The Senate race in the 30th district is one of the most hotly contested statehouse matchups this year. Between them, the candidates have raised more than $775,000. This is one of a handful of swing district races that will determine if Democrats grow their narrow majorities in the Washington House and Senate. 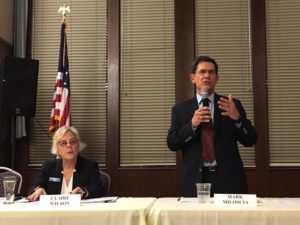 “Federal Way has been one of the major 50-50 battlegrounds in the entire state,” said Chris Vance, a former chair of the Washington State Republican Party who now co-chairs a political action committee that is trying to elect moderate independents to public office.

Based on the results of the August primary, Vance predicts Democrats will gain several seats in the Washington Legislature this November.

“Unless something dramatic changes, Democrats are going to pick up between two and five seats in the Senate and 10 to 20 seats in the House,” Vance predicted.

In an interview before the candidate’s forum, Miloscia sounded fatalistic in the face of a potential Democratic “blue wave.”

“I’m here to serve my folks and we’ll see if that’s enough to get me elected in a wave,” Miloscia said. “I’m working hard.”

Miloscia is a former Democrat turned Republican who previously served in the Washington House. He describes the 30th as a “moderate, working class” district and acknowledges President Trump is a potential liability for him this year

“When Trump is doing his thing on Twitter, that seems to drive the conversation,” Miloscia said, referring to the president’s predilection for opining and lashing out on social media.

But Miloscia is hoping voters in the 30th are more alarmed about what’s happening just a few miles up I-5 in Seattle, where a socialist sits on the city council and where there’s a push for safe injection sites for heroin users and an employer head tax.

“We don’t like extremism, whether it’s coming from the federal government or coming from Seattle,” Miloscia said.

Were it not for Trump, Wilson, the Democrat, might not be in this race at all. She was recruited and trained to run for this seat by Emerge Washington — a group that launched in 2017 to elect more Democratic women to public office. Emerge Washington is part of a national organization called Emerge America founded in 2005.

Wilson said it’s been “a bit unnerving” to go from non-partisan school board races into one of the most ferociously fought statehouse races in the state.

“This is a very different scenario for me,” Wilson said.

In fact, the candidates in the 30th are being outspent by political action committees on both the right and left, according to campaign data from the state’s Public Disclosure Commission. So far, those independent groups have poured nearly $1 million into the district, mostly to fund negative ads. Wilson recalled the first time she saw one of the ads attacking her was while she was getting a pedicure after a day of knocking on the doors of voters.

“You look up and there are you are Photoshopped into something else and all I could do was just look into my phone and hope that nobody was looking at the TV,” Wilson said.

At the candidate’s forum, diehard Democrats Frank and Denise James said they have two goals this year: to see Democrats take control of the U.S. House and hold onto control of the Washington Legislature. Frank James is hoping the recent confirmation of Judge Brett Kavanaugh to the U.S. Supreme Court will give down-ballot Democrats like Wilson a boost.

“I’m thinking that might help Claire, I’m hoping it does,” James said. “We need all the help we can get.”

A couple of rows away, Republicans Jack and Judy Walsh had local issues on their minds — like taxes. They don’t want Democrats to make big gains in Olympia.

“I’m concerned about the prospects of etching towards a state income tax,” Jack Walsh said. “It just gets more and more and more expensive to live here,” added Judy Walsh.

Another highly competitive state legislative race, based on campaign finance reports, include the open state Senate seat in the 26th Legislative District, which stretches from Gig Harbor to Port Orchard on the Kitsap Peninsula. That seat is currently held by Republican Jan Angel, who is retiring. The race pits Republican Marty McClendon, who previously ran for lieutenant governor, against Democrat Emily Randall, a community organizer.

The state Senate race in the 42nd Legislative District, which runs from Bellingham to the Canadian border, is also shaping up to be a closely-watched race. The seat is currently held by Republican Doug Ericksen, who has closely aligned himself with President Trump. He is being challenged by Bellingham city council member Pinky Vargas, a Democrat.

And in the Cascade foothills east of Seattle, both House seats in the 5th Legislative District are currently held by Republicans. But in the primary, the Republican candidates trailed their Democratic challengers by eight points.

This year, all Washington House seats and about half of state Senate seats are up for election. So far candidates have raised more than $22 million. 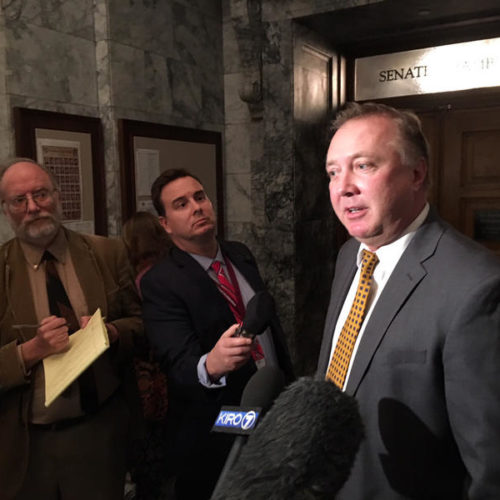