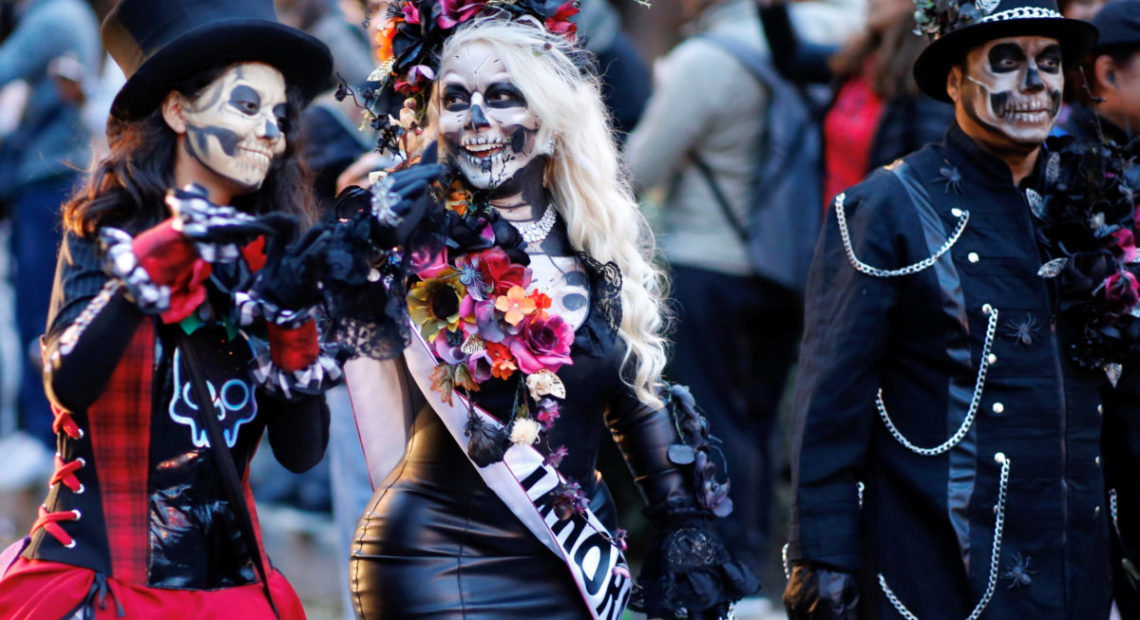 PHOTO: People participate in a Catrina parade ahead of the Day of the Dead in Mexico City, Mexico, October 21, 2018. CREDIT: Andres Stapff/Reuters

For the Mexican holiday Dia de los Muertos, or Day of the Dead, writing rhyming poems called calaveras literarias — mocking epitaphs for the dead or satire targeting the living — has become a proud tradition.

They “allow poets or artists the opportunity to take a crack — it’s almost like you’re roasting someone,” said Eduardo Diaz, director of the Smithsonian Latino Center in Washington, D.C. “They’re very organic in nature, very improvisational.”

Calaveras literarias, which translates to “skull literature,” are inspired by the iconic “La Catrina” skull imagery, derived from the Mesoamerican goddess Mictecacihuatl — queen of the underworld. In the 20th century, La Catrina was re-imagined by Mexican artists José Guadalupe Posada and Diego Rivera as an elegantly dressed female skeleton. This feminine figure quickly became associated with Dia de los Muertos, held Nov. 1 to 2, and these poems.

Though the holiday is designed to honor the dead, it’s not a mourning celebration. Instead it focuses on celebrating a lost loved one’s life with happiness and humor. A long-held tradition is to instruct school children to use witty rhyme and repetition to write calaveras literarias that infuse levity in the death of a relative or other prominent figure.

Those remembered in calaveras literarias are often subjected to a wicked humor that pokes fun not only at a person’s shortcomings, but at inevitable mortality itself. In one poem posted online, using a play on words, the author depicts the Aztec queen Xochitl and La Catrina honoring the dead by getting drunk together on cheap tequila in a cemetery.

Today, the calavera literaria has been stretched to eulogize internet crazes that have outlived their cultural relevance. In one meme we found, the pop hit “Despacito” is called a “contamination” and listening to it a “sickness.”

Though they have a long oral tradition, calaveras literarias were first published in 1849 by the Mexican newspaper El Socialista. Authors today often post them to social media ahead of the Dia de los Muertos celebration,. But in the past, they were intermittently banned or destroyed for their highly political sentiments.

That political tradition continues, and crosses borders. It even reached the presidential race. Since he launched his presidential campaign, Trump became a figure of ridicule in Mexico over his hard-line stance on immigration, plans to build a border wall and incendiary comments that characterize Mexicans as criminals, rapists and drug dealers. In one 2015 example we found, Francisco X. Alarcon wrote “Poema Calavera a Donald Trump” and shared it on Facebook. In the poem, a Calaca — or skeleton figure — pulls the then-candidate into the underworld and turns him into a pinata, who tries to convince “the devils” to build a border wall “so Mexicans won’t keep coming/ in great numbers to their hell” (translation ours).

If American politics has insinuated itself into the calavera literaria, Dia de los Muertos has definitely entered American culture as well. Mictlan, or the Land of the Dead of the Aztec culture, is the central setting for Pixar’s 2017 megahit “Coco.” And Day of the Dead has wound up in music videos and been turned into Halloween costumes.

For Diaz, this effort to embrace Mexican culture is valiant, but he worries the holiday has lost some of its Mesoamerican roots. “I’m sure the original practitioners of Dia de los Muertos may be rolling in their graves over the way things have turned out,” Diaz said.

The tradition was begun some 3,000 years ago by the Aztecs, who celebrated the “third death,” during which the soul is said to pass into the afterlife. Every August, communities gathered over ofrendas or altars to honor lost loved ones with marigolds or flor de muertos, dance, music and food. When the Spanish conquered the Aztecs in the 16th century, however, the holiday shifted to align with the Catholic tradition of All Soul’s Day on Nov. 1. More recently, the holiday has been often mixed up with the Gaelic tradition of Samhain or the Christian celebration of All Hallow’s Eve.

The link to modern Halloween may be convenient, Diaz said, but “Halloween is about costumes and scaring everyone, which has nothing to do with Dia de los Muertos.”

Despite the increasing commercialization and Americanization, Diaz values the holiday’s ability to use artistic expression to unify people in an increasingly divided world.

“This is a spirituality-based cultural practice, and if culture can do anything, it can create a space where people of diverse groups can come together. That’s something politics, religion and economics can never do,” Diaz said. Even if these poems address hot-button political issues, “the arts create a common table where people can pull up a chair and check their baggage at the door.”

In this special month,
In which everything is party and dance,
We remember with love
Traditions and praises.

It is necessary to remember
That even with faith,
That we will meet again,
We remember his adventures.

For our loved ones
We build an altar,
For their souls and heart beats
We sense coming back!

So we celebrate them
With large pieces of bread,
Placed on altars
With flowers candles, mezcal!

These exquisite breads,
That are Colorful,
Of horn and bone shapes
We will leave for them.

To make them happy
In their fleeting visit,
In this land of love
The memories that leave.

For me it is a great gift
To be able to find them,
On such special days
And be able to enjoy them.

If my dead ones knew
How much I miss them,
They would come every day
And would be very pleasant!

I wait for them sitting down
For I know we’ll converse
These two nights full
With atoles and cookies.

Dear happy souls,
Knowing that we love you,
We remember your love,
And await your return!