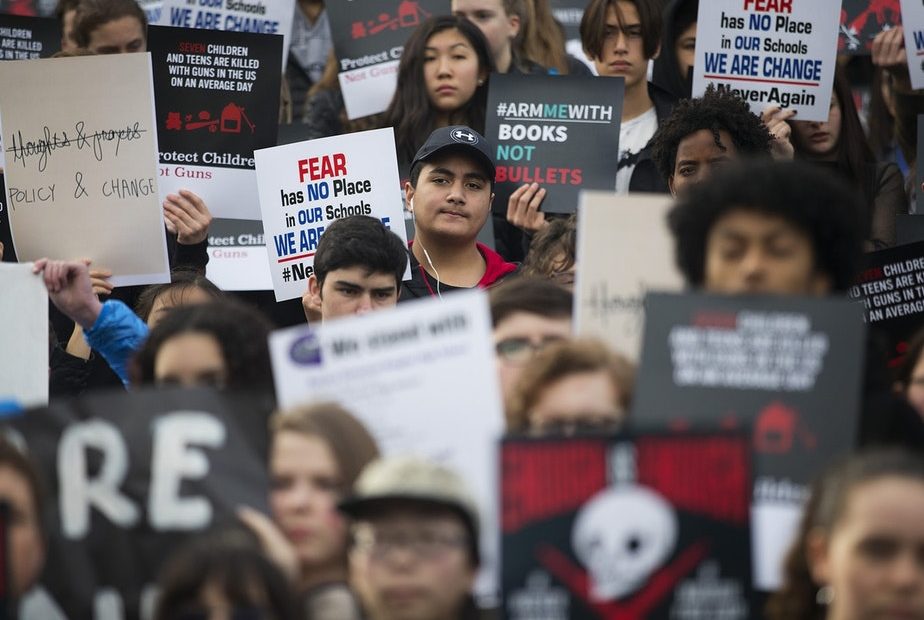 School Shootings Are Rare, But Threats And Lockdowns Are Not. Families Say That Takes A Toll

“There’s a lockdown at school,” Madeline, a sixth-grader, whispered into her phone. “I just wanted you to know I love you.”

The message was for Madeline’s mom, Shannon McCarthy, who called it “the worst thing that I’d ever heard in my life.”

Her daughter said students were lining up to leave class when they were notified of the lockdown at Whitman Middle School in Seattle.

Their teacher ushered them to the back of the classroom.

“After he turned the lights off, they announced over the intercom that this wasn’t a drill,” Madeline said. “I know a bunch of kids who have anxiety and they were really frightened,” she said.

Whitman was one of several Seattle middle schools to receive threats that day. School officials say the number was traced to a system in New York State used to send prank phone calls.

Feb. 14, Valentine’s Day, marks the one-year anniversary of the school shooting in Parkland, Florida. And school safety is high on the legislative agenda in Washington state this year. There are bills for more police officers and mental health staff in schools, and to help schools better prepare for emergencies.

Mass shootings in U.S. schools are incredibly rare, down since the 1990s. Yet the state teacher’s union, the Washington Education Association, reported that after a series of community meetings last spring, fears of violence are common among students and educators.

Sergeant Craig White helps investigate threats to school safety for the Snohomish County Sheriff’s Office. “A lot of the threats we get at schools have to do with an anonymous message written on a bathroom wall or an anonymous phone message,” he said.

A few years ago they might simply close school for a day. But that’s expensive and disruptive, White said. “It’s not viable for a district to do that anymore.” Instead, he said schools might pay police officers overtime to spend the day there.

Donlin said they want money for nine regional hubs to help public and private schools prepare for all types of emergencies.

But officials are trying to balance student safety with the rights of students accused of making threats.

One bill before the Legislature would require that schools establish teams and use objective criteria to do threat assessments — something some districts are already doing.

Attorney Chris Williams said he would welcome that requirement. Williams has represented students appealing their suspension or expulsion. He said that without this process, administrators can panic and act too quickly to ban a student.

“I’m hopeful that if you provide some structure it will be better than the completely disorganized and inconsistent results we’ve seen across districts so far,” he said.

And if threat assessments aren’t done quickly, Williams said the accused students may have already paid a high price. He recently testified before the Legislature that “my clients — who have been exonerated at hearing or found not to be threats — have experienced arrest, been expelled, forced into alternative schools, had their graduations delayed, been not allowed to walk at graduation and lost all of their friends, even though they never did what they were accused of.”

He represented one student who was suspended, even though the hearing officer and school officials agreed that the student’s text to friends was a joke, not a threat to safety.

“They nonetheless upheld the suspension because just those words are scary and worthy of sending a message to the school community,” Williams said. “So, cooler heads do not prevail, often.”

Back at Whitman, sixth-grader Madeline said she would have liked more explanation from staff about what was happening that day. She was unaware the lockdown was prompted by a phone call, for example

“I do wish that they had told us, because there were rumors going around the school that there were people running around the neighborhood with guns,” she said. She was also worried about her sister’s elementary school nearby.

The next week, students had an extended advisory period to talk about what had happened. Then Madeline said it was back to the business of learning. “I think most of the people just moved past it. But it wasn’t something that was easy to forget because – I don’t know about the other kids but that was one of my first real lockdowns.”

Madeline’s mom, Shannon McCarthy, said she appreciated the school’s handling of the lockdown, both the prompt, detailed e-mails to families, and the opportunity for parents to come get their kids early that day.

She said there were “lots of hugs” as families sought to reassure their kids that night.

Mike Donlin, who heads the School Safety Center at the state schools office, said there’s no count of the number of lockdowns in Washington, or the disruption they cause. “That’s not documented any place. The school itself may, or the district might, but it’s not something that anybody collects statewide,” he said.

And he said the number of lockdowns won’t tell you much about the school. “Reasons for a lockdown may quite honestly be, we got coyotes on the playground,” he said.