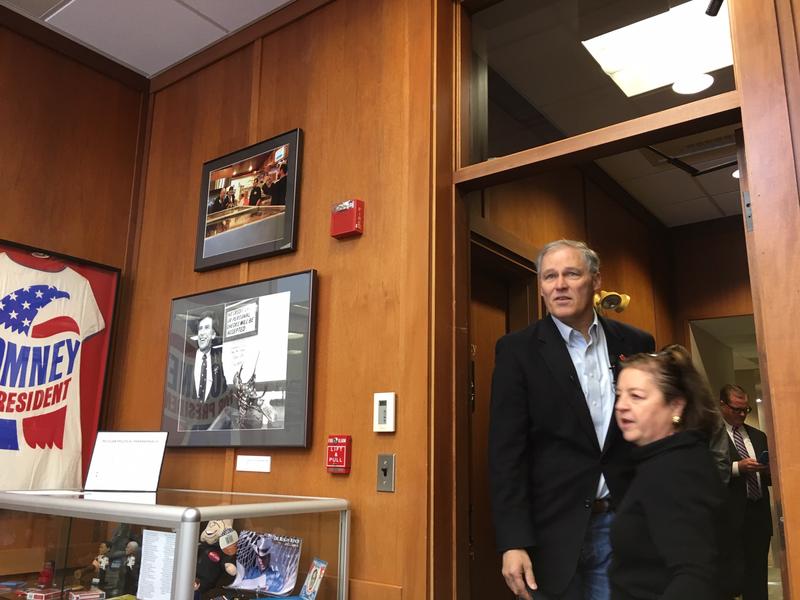 To keep up with Gov. Jay Inslee as he campaigns around the country for president, the Washington State Patrol is preparing to nearly double the size and more than double the budget of the specialty unit that protects him.

Until recently, the Executive Protection Unit (EPU) was comprised of eight troopers and one sergeant. Now the unit is in the process of adding six additional troopers plus a sergeant and a lieutenant, according Chris Loftis, a State Patrol spokesman who spoke with the Northwest News Network and The Seattle Times.

Loftis said the additional staffing is a direct result of the travel associated with Inslee’s nascent bid for president announced on March 1.

“The most extreme contingency is that we’re covering his travel and the first lady through the entirety of the campaign in 2020,” Loftis said. Inslee is one of more than a dozen candidates seeking the Democratic nomination in advance of the 2020 presidential election.

The Washington State Patrol is required by law to provide protection to the governor, the governor’s family and to the acting governor when the governor is out of state.

In fiscal year 2018, the Executive Protection Unit’s budget was $2.6 million. In fiscal year 2020, the patrol anticipates it will spend $5.3 million assuming Inslee remains a candidate.

Last fall, the state patrol requested an additional $1.3 million in the coming two-year budget to hire one more trooper and to pay for anticipated travel and overtime costs. At the time, Inslee was finishing a one-year term as chair of the Democratic Governors Association, a role that required extensive travel throughout the country.

Even though Inslee was preparing to step down as DGA chair, the patrol anticipated that Inslee’s intense travel schedule would continue even though he had not yet announced his candidacy for president.

Internal documents obtained at the time by the Northwest News Network and The Seattle Times through a public records request revealed that Inslee’s DGA travel had taken a toll on the troopers who travel with him. In an email last August, the sergeant overseeing EPU said he was concerned about the health and welfare of his staff.

“We are literally sending troops all over the nation with sometimes only a couple days notice,” wrote Sgt. Leonard Crichton. “I am pretty sure we cannot continue at this level without something breaking.”

In recent weeks, however, the patrol revised its request for additional funding for executive protection and sent that new request to the Office of Financial Management (OFM). A spokesman for OFM said the request had been passed along to legislative budget writers in the House and Senate who are scheduled to unveil their budget proposals next week.

In the meantime, the state patrol isn’t waiting for legislative approval to grow the size of the protection detail. Loftis said the money will come from the state patrol’s existing budget, for now.

Asked if the increased staffing of EPU would affect the number of troopers patrolling Washington roads, Loftis said the agency often pulls personnel to serve in specialty units and capacities.

“We always work to absolutely minimize the impact of any special duty or duty adjustment on our capacity in traffic services,” Loftis wrote in an email.

State Rep. Drew Stokesbary, who serves as the ranking Republican on the House Appropriations Committee, said he was frustrated that Inslee’s campaign for president will cost taxpayers more and urged Inslee to use campaign funds to reimburse for the cost of his security detail.

Stokesbary is the co-sponsor of legislation that died earlier this year to create an account that private donors could contribute to in order to offset the cost of extra security for Inslee. Stokesbary said House Republicans are likely to introduce amendments to the House Democratic budget that would create a similar account.

While Inslee’s campaign pays for his travel costs, the governor has consistently said there are no plans to reimburse for the cost of his protection detail.

“This is a state law or obligation that security is provided, has historically been provided for any governor for all of their travels under any circumstances,” Inslee told The Seattle Times while campaigning in Iowa earlier this month. “I am not going to propose a change in that policy.”

The Federal Elections Commission requires candidates to cover the cost of the “normal and usual fare or rental charge” for non-airplane related travel. That likely means that if the state patrol transports Inslee to campaign-related events, in or out of state, the campaign will have to pick up the cost of the vehicle and mileage.

There is precedent for a presidential campaign to reimburse a state for security costs. In 2016, then-Wisconsin Gov. Scott Walker, a Republican running for president, used campaign funds to repay the state for costs related to his security detail.

The governor’s communications director, Jaime Smith, said the decision to add staff to the EPU was made by the state patrol and not at the direction of the governor’s office.

“Our understanding is they are continuing to provide security in a manner consistent with their practices during prior administrations and the campaign will fully pay for or reimburse all expenses directly related to the governor’s travel,” Smith wrote in an email.

Inslee is the first Washington governor to run for president.

This story was reported in collaboration with The Seattle Times