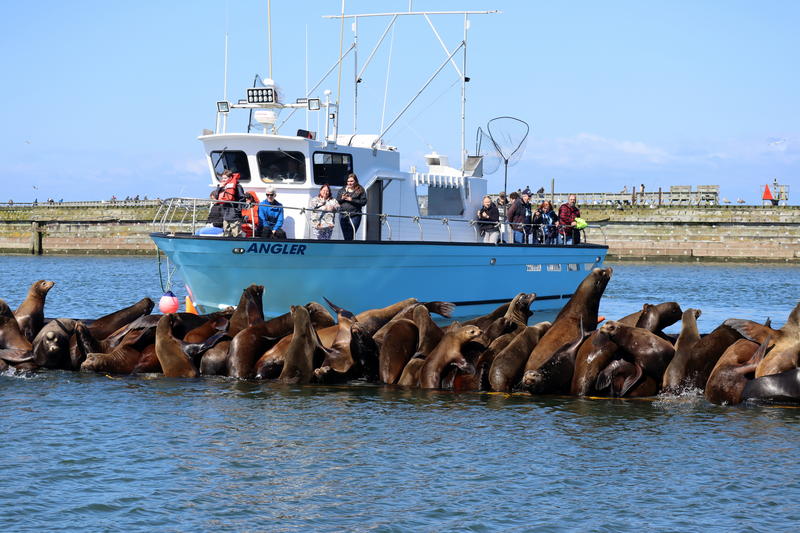 A big rebound in the sea lion population along the West Coast in recent years has created a constant battle to wrangle the protected animals. They’re smart and fun to watch from a safe distance, but also noisy, smelly and proving to be a headache for some coastal marinas.

“It’s a free zoo kind of, just don’t pet ’em!” observed Dennis Craig of Olympia while he watched a pier at Washington’s Westport marina nearly sink under the weight of dozens of burly bulls jostling and snoozing in the sun.

“You notice when the charters come in, they’ll swing wide just so people can get a closer look because, like I say, it’s entertaining,” Craig said.

The flip side of these flippered fish fiends can be seen in the mounting bill to the marina, including the cost of busted docks, broken electric stanchions and lost business.

“Nearly all of our net revenue was used to repair damage caused by sea lions this year, taking those funds away from infrastructure improvements and replacements that are critical to the marina facility and our users,” said Westport Marina business manager Molly Bold in an email.

Sea lions have blocked people from mooring their boats. In other cases, commercial fishermen have had to run through a sea lion gauntlet just to get onto their vessels. The sea lions even snatched a few pet dogs right off the piers, said Westport Aquarium co-owner Marc Myrsell, who volunteers to monitor the marine mammals.

“If a person is walking down the dock and they have a bag in their hand, that sea lion in its mind might think that person has food and can get aggressive because some people have been feeding them — intentionally or unintentionally,” Myrsell said in an interview.

The most recent population estimate for California sea lions along the West Coast is around 257,000. Robert Anderson, the marine mammal program manager at the NOAA Fisheries regional office in Portland, pegged the population growth rate at roughly five percent per year, although the sea lions may soon reach the carrying capacity of their marine environment.

The current abundance of sea lions is at least seven times greater than the population nadir recorded in the late 1960s. Before Congress passed the Marine Mammal Protection Act in 1972, fishermen and the public could take matters into their own hands and shoot pesky sea lions. In earlier decades, the beasts were also killed for hides or to make pet food. 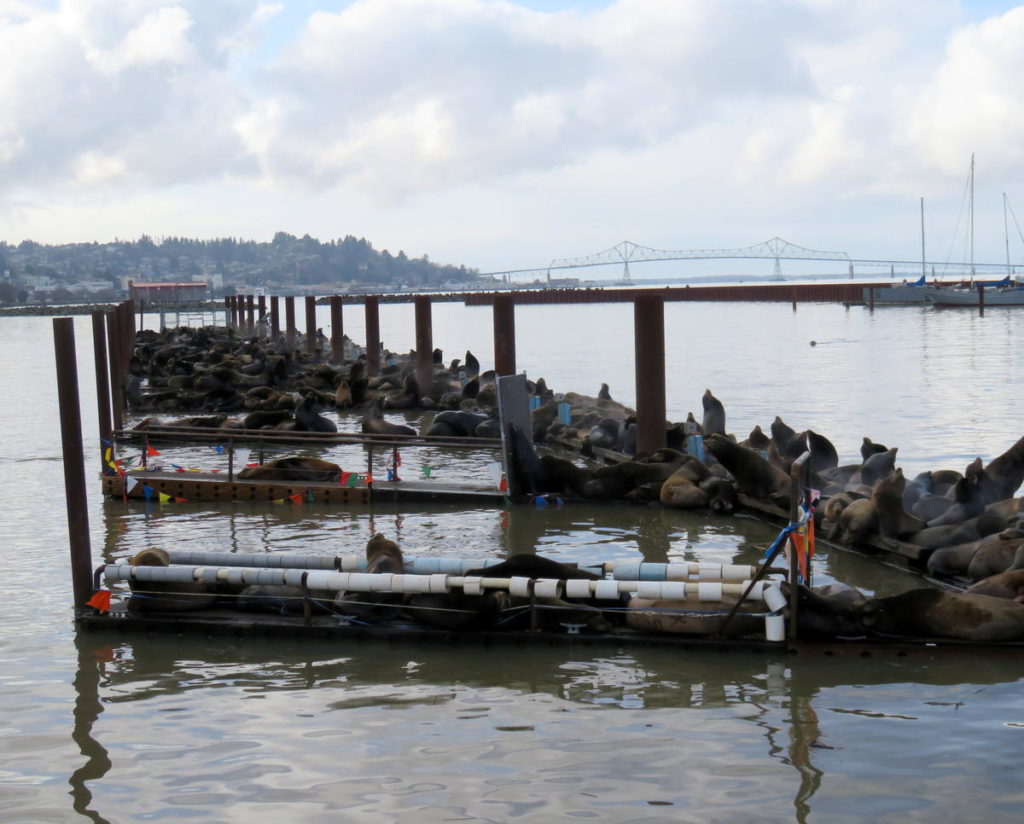 The low rail on the finger piers in foreground worked for a while to deter sea lions at the Port of Astoria’s East Mooring Basin, but not anymore. CREDIT: TOM BANSE/N3

Now, the proliferation of sea lions has created issues from Neah Bay, Washington, to Brookings, Oregon — occasionally in Puget Sound too.

And Westport is not even the worst off. Astoria, Oregon, attracts the most sea lions by far, according to interviews with port staff and the National Oceanic and Atmospheric Administration.

“Nothing works for long or it costs too much,” said Port of Astoria executive director Jim Knight in an interview Thursday.

He said the local sea lion census peaked at around 3,000 critters two years ago and is lower right now. The floating port docks offer a convenient resting place for California and Steller sea lions alike between hunts for fish migrating up the Columbia River.

Knight said the most effective deterrent was a low-voltage electrified mat deployed on a demonstration basis by Vancouver, Washington-based manufacturer Smith-Root at both Astoria and Westport.

“It actually did work,” Knight said. “But the cost of them was way more than the port could afford.”

On the southern Oregon coast, the Curry Sportfishing Association and the Port of Gold Beach have used private donations and small grants to hire civilian patrollers to scare sea lions away from people fishing on the Rogue River summer-fall salmon run. The waterborne Sea Lion Patrol is permitted to toss underwater firecrackers called “seal bombs” when sea lions get too close to recreational fishermen at the river mouth. Otherwise, the sea lions snatch hooked salmon before sportsmen can reel in their fish. 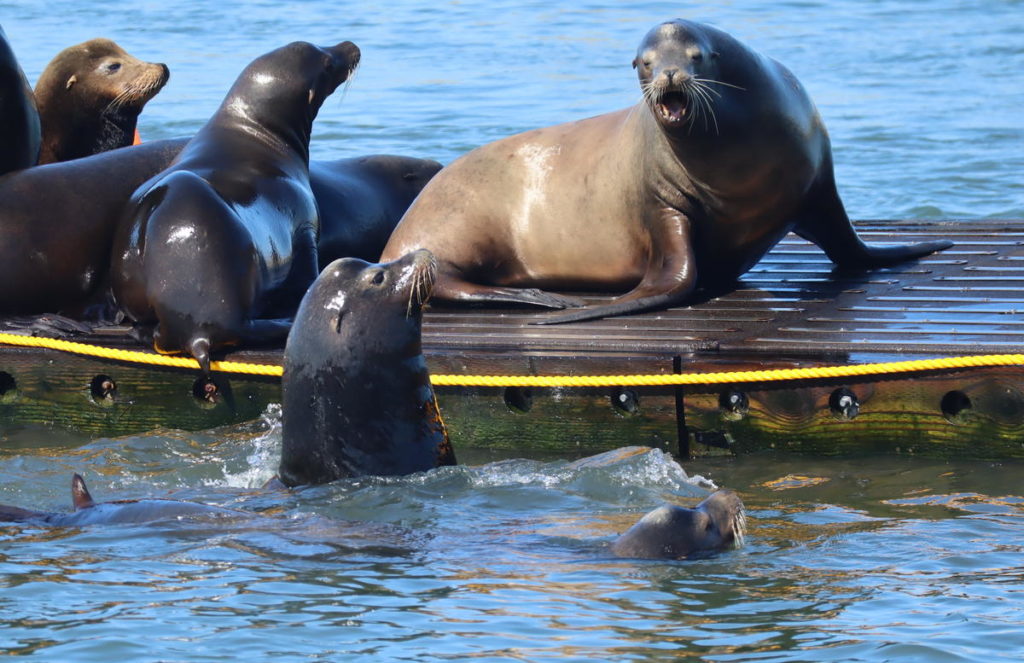 At times, the California sea lions that hang out at the Westport Marina display aggressive behavior. CREDIT: TOM BANSE/N3

The problems in marinas continue because sea lions are smart and will habituate to most deterrence strategies, said NOAA’s Anderson.

“You’ve got to be pretty persistent about it,” Anderson said in an interview. “Once you apply whatever deterrence method you do, if you walk away they’re going to come right back.”

Anderson says when port officials call him for advice on sea lions, he gives a long list of non-lethal options.

“You can definitely irritate and aggravate an animal pretty strongly,” Anderson explained. “I mean, these are pretty durable animals.”

But he also underscores the limits set by the federal Marine Mammal Protection Act, which boil down to: You cannot do anything that could result in serious injury or death.

In Westport, Washington, the port authority has tried using a low-flying drone, noisemakers, water hoses and the aforementioned low-voltage electrified mat as countermeasures. It is now considering physical barriers, but wary about the expense.

This has meant that, down at the docks, visitors like Dennis Craig are still serenaded by a chorus of barking sea lions. Craig and his grandchildren were doing some recreational crabbing on Easter weekend.

“You know what, I don’t see anything bad about them one way or the other because we’re on their territory, not the opposite,” Craig said. “They were here before we started building.”

The mood is less forgiving in the local fishing community and port offices.

The federal government allows the states of Oregon and Washington to trap and kill sea lions that feed on endangered fish below Willamette Falls on the Willamette River and near Bonneville Dam on the Columbia River. But those lethal control permits are restricted to those places only.

Last fall, Washington’s Southern Resident Killer Whale Task Force sparked talk of possible wider sea lion and seal culling to reduce competition with endangered orcas for food. The Washington Legislature picked up that thread as recently as last week, when a bipartisan group of state senators co-sponsored a non-binding missive to President Donald Trump and the U.S. Secretaries of Commerce and Interior.

The state Senate resolution called on the federal government to take action to limit sea lion and seal “predation of salmon and other fish in Puget Sound and all Washington waters.”

Yet while sea lions are regularly observed eating salmon, Myrsell said in the Westport area the majority of their diet is anchovies, sardines and herring.

Congress has agreed to make it easier to kill sea lions threatening fragile runs of salmon in the Northwest. A bill approved by the House this week changes the Marine Mammal Protection Act to lift some of the restrictions on killing sea lions to protect salmon and steelhead in the Columbia River and its tributaries. Continue Reading Bill To Allow Killing Columbia River Sea Lions To Help Salmon Heads To President Trump’s Desk