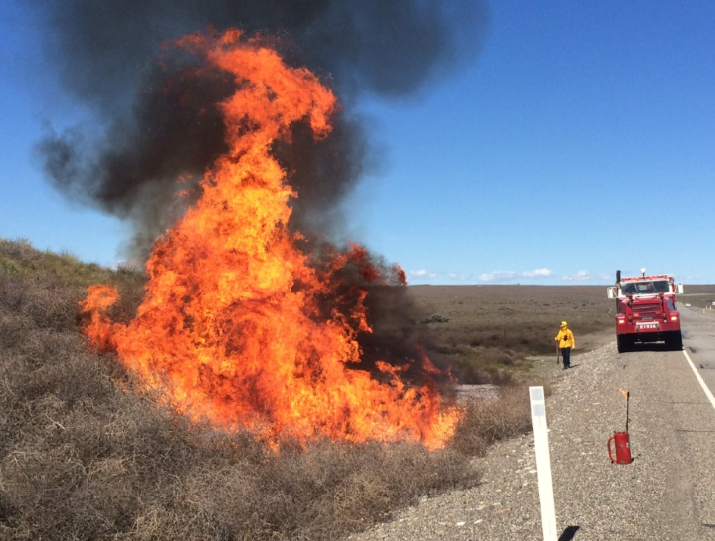 At the Hanford Nuclear Site in southeastern Washington, and across the West, winter’s deep snow and a cool spring have produced lots of brush and grass.

That’s a problem for the coming fire season.

Hanford and the region surrounding it is a desert. Sagebrush and bunchgrass stud the site. But there’s also a lot of invasive cheatgrass that forms a brittle shag carpet across the landscape. And then there are drifts of tumbleweeds. The site’s a bit like an expansive fire starter. It’s all fine if there isn’t a spark.

“You have to have luck,” said Norb Kuhman, chief of the Hanford Fire Department. “Anyone in this business realizes how fortunate we get at times, or how unfortunate we get at other times, based on prevailing weather conditions — the wind speeds, the humidity. It all goes into play.”

Kuhman said his crews have to defend sensitive wildlands, historic structures and radioactive waste sites at Hanford. There are about 100 firefighters rolling out on these lands — with more heavy equipment operators and helpers.

And they’re getting ready: training, digging defendable dirt lines and burning excess brush along roadways. Last year, Hanford firefighters responded to 11 wildland fires on the site that burned about 20,000 acres on the 586-square mile nuclear site.

But across the West in the lower foothills and in grasslands of the Columbia Basin there is also dramatic grass and brush growth.

“We are definitely seeing substantial growth of fine fuels like grass crops,” said Deb Schweizer with the National Interagency Fire Center in Boise. “They have to dry out and cure — that’s where we’ll have our concerns.”

Schweizer said the concern is fires in that grass and brush can burn hot and fast — like kindling for starting a larger fire. Federal fire managers expect grasses to begin drying out soon with higher expected temperatures in the region.

In the central Washington, late spring rains have sprung up a second crop of grass and shrubs adding even more to the fuel loads, according to Liz Smith, district manager for the state Department of Natural Resources in Ellensburg.

“Grasses here will grow a lot taller and grow thicker in density,” Smith said. “Those fuels will grow quickly, and they will die off quickly. That is concerning.”

Smith says in the area north of Ellensburg, there have already been a few roadside fire starts, burning 30 to 40 acres before they’re caught by firefighters.

“That’s a little big [number] for this time of year,” she said. “And to have that many is worrying.”