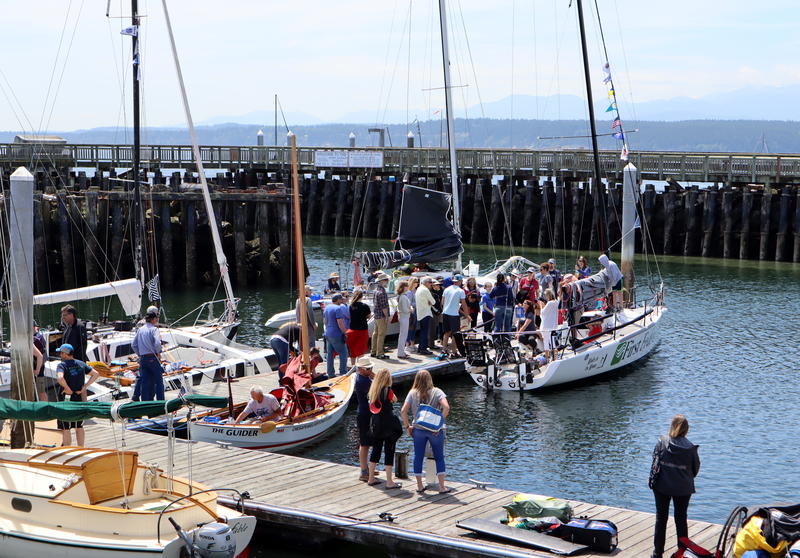 Alaska Or Bust! Racers Set Out On Paddleboards, Canoes, Skifts From Port Townsend

The starting horn echoed bright and early Monday morning across Port Townsend Bay to launch the fifth annual running of a madcap maritime marathon. The 750-mile Race to Alaska has been compared by its organizers to the Iditarod sled dog race, but with a chance of drowning or getting eaten by a bear.

Any size boat with any size crew can compete in the Race to Alaska as long as it has no motor and can get to Ketchikan self-sustained, meaning no trailing fleet of support teams were in sight. The 43 entries this year include two stand-up paddleboarders, a Hawaiian-style outrigger canoe, a half dozen rowboats and skiffs alongside a bunch of really fast sailboats, catamarans and trimarans.

“There continues to be interesting boats across the spectrum of craft,” said race co-founder Jake Beattie of the Northwest Maritime Center. “It’s just whatever you want to bring will be racing against whatever else other people want to bring.”

As in year’s past, the winning team collects $10,000 and the runner-up gets a set of steak knives. Beattie said this year’s field of competitors is the largest in the history of the epic adventure race.

In a novel twist, last year’s winner is back to defend her title. That’s the all-female, Seattle-area crew of Team Sail Like A Girl.

“I felt like we needed to come back and just continue to represent women in sailing and demonstrate what women are able to do this sport,” said team captain Jeanne Goussev in an interview Sunday. “I love the adventure in this race. It is unlike any other sailboat racing that I do. Part of it is that.”

Goussev said it’s comforting to have some idea this time around what the long course off the wild British Columbia coast can dish out. The seven new and returning members of Team Sail Like A Girl are shoehorned into a 32-foot long Melges performance racing monohull. 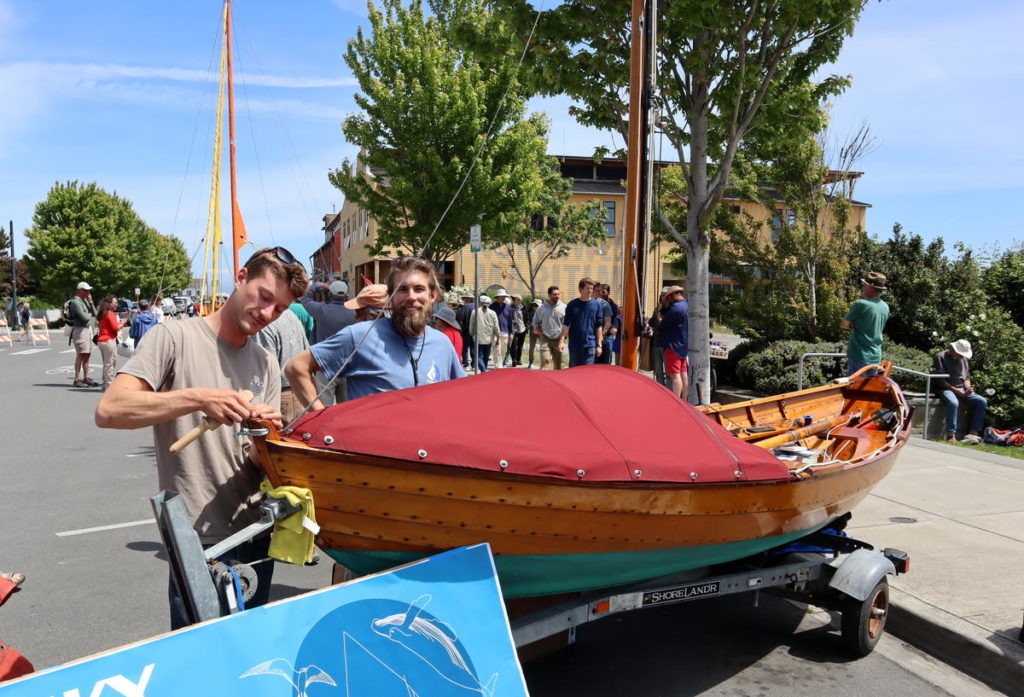 The Race to Alaska begins with a qualifying stage from Port Townsend to Victoria and then the forty-some teams begin racing in earnest on Thursday up the Inside Passage to Ketchikan. Previous winners blessed with good winds sailed day-and-night to reach Ketchikan, from Victoria, in around four days.

Race Boss Daniel Evans pointed out that more than a dozen of the teams are under twenty feet with the smallest coming in at fourteen feet. In a statement, he said the size of the boat alone will create exciting times for those teams.

“We’re going to be conservative,” Templeton said. “Definitely with this size of a boat, all of your decisions have more consequences and you really have to take some careful considerations.”

Templeton said he and Belle have no expectations of winning the race with this boat. He said their effort is more about personal achievement and raising money and awareness for ocean protection.

Another entrant with an open boat is Team Holopuni in their 32-foot Hawaiian outrigger sailing canoe.

“I wanted to do the race in a style where we’re not positive that we’re going to make it,” said veteran adventurer Marty Fagan. “So I wanted to pick something in that fashion, something different.”

Marty and his wife Chris Fagan of North Bend, Washington, along with teammate Danny Geiger of Seattle will attempt to sail and paddle around the clock, which means taking turns sleeping in a waterproof bivy sack tied to the trampoline deck when the seas are sufficiently calm.

Last year saw the introduction a spin-off from the maritime marathon — a separate, shorter race on Puget Sound race dubbed Seventy48. As the name implies, entrants get up to 48 hours to navigate the 70 miles between Tacoma and Port Townsend. Only human-powered craft are permitted, unlike the parent event where engine-less sailboats dominate.

A team composed of two experienced ocean rowers, Greg Spooner of Bainbridge Island and Thiago Silva of Brazil, captured the $5,450 winner’s purse in the second running of Seventy48. They used a long, narrow, open water rowing double that looked like a cross between a sea kayak and a traditional two-person crew racing scull to traverse the course along the west side of Puget Sound in just under 11 hours, racing overnight from Friday into Saturday.

Beattie said the second running of the SEVENTY48 race drew 117 teams. He said if it keeps drawing that level of interest and sponsors, he believes it will become a regular June feature on the calendar. 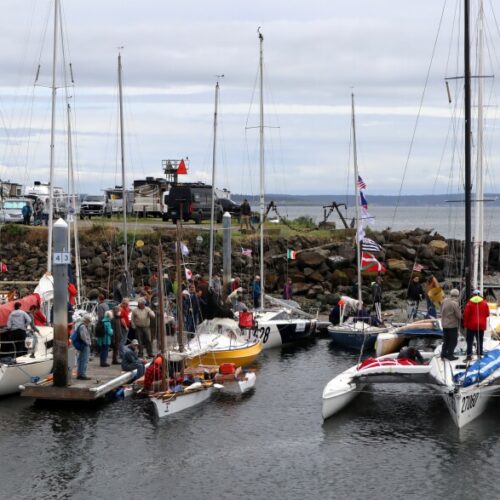 A Northwest adventure race that some call “the best worst idea” has returned after a long, pandemic hiatus. The 2022 running of the Race to Alaska for engineless boats cast off at the first light of dawn Monday amid high winds in the Strait of Juan de Fuca that the organizers characterized as “between seasick and dangerous.” Continue Reading The ‘Best Worst Idea.’ Race To Alaska For Engineless Boats Returns After Pandemic Hiatus 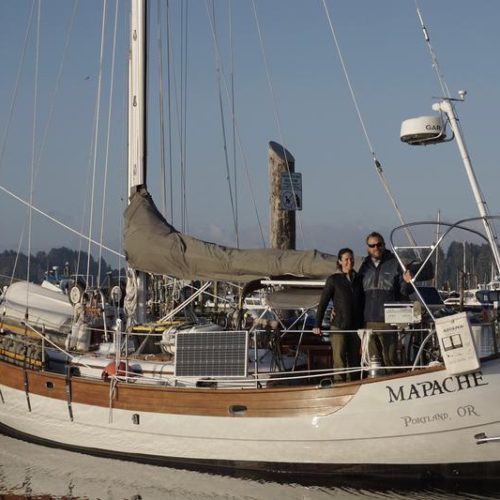 There is probably no better place to social distance than on a small boat in the ocean. But you do have to go into port occasionally, provided it’s not closed. The risks and unknowns created by the ongoing pandemic have put off some people’s plans to sail around the world right now. But not for one Northwest couple. Continue Reading Around The World By Boat: Pandemic, Fires, Smoke Can’t Change Plans For Northwest Couple 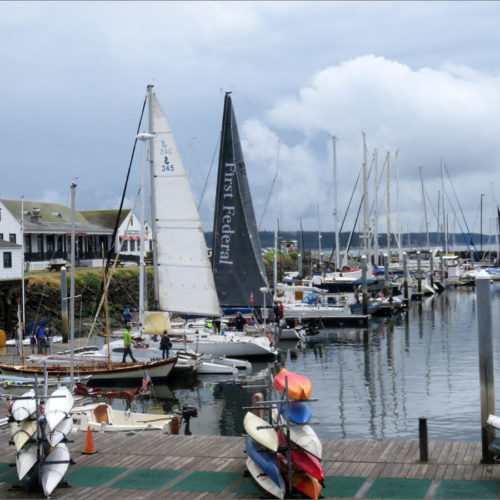 The starting gun fires bright and early Thursday morning for the fourth annual running of the maritime Race to Alaska. The 750-mile adventure marathon has been compared to the Iditarod but with a chance of drowning, being run down by a freighter, or getting eaten by a grizzly bear. Continue Reading Adventurers Aplenty Line Up In Washington For Fourth Running Of Race to Alaska