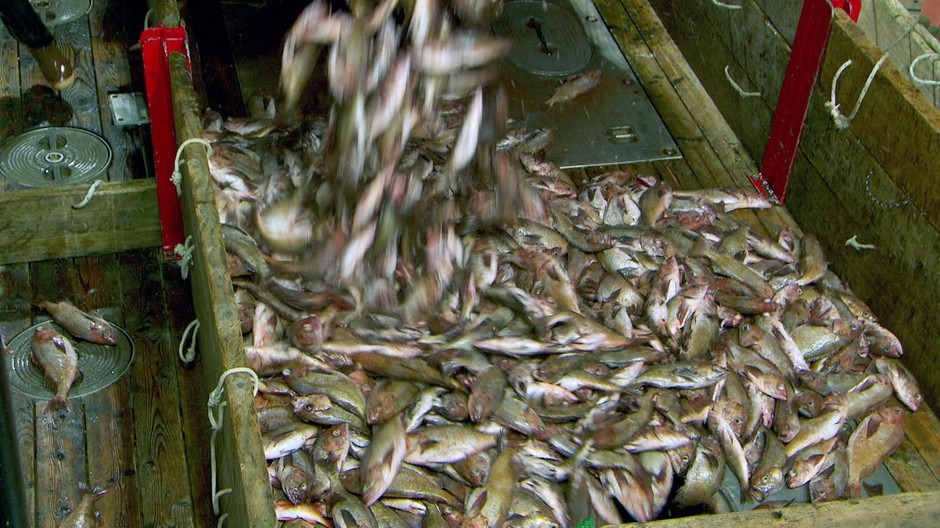 Thirty miles off the coast of Newport, Mikey Retherford Jr. is watching rockfish in the ocean below him on a screen in the wheelhouse of the Winona J fishing trawler.

“See that right there?” he says, pointing at a yellow blob on the screen. “Boom! We don’t want to miss that. That’s there is widow rockfish. That’s what we’re targeting right there. That’s a very large school of fish.”

About 30 minutes later, his crew reels in a massive tube of netting stuffed with widow rockfish – one of dozens of groundfish species that live at the bottom of the ocean. The fish pour out of the net in a steady stream, and as they pile up, deckhands hose and shovel the giant pool of fish into hold under the deck.

Altogether, they land 60,000 pounds of widow rockfish. Retherford, 37, says for most of his career, a haul like this was unthinkable.

“When I started working for my dad as an adult full-time, it was like oh, we can’t catch rockfish,” he said. 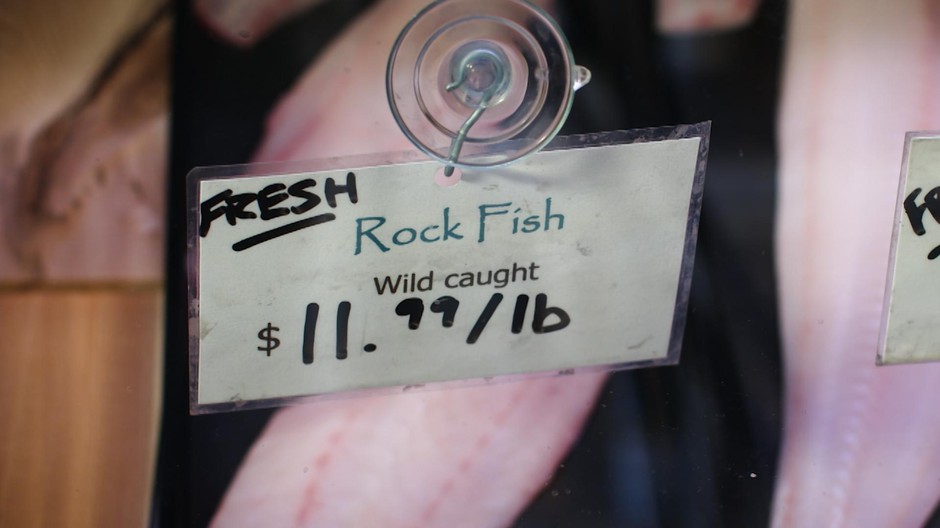 Too much fishing with trawl nets led to a devastating collapse in fish populations in the 1990s. Widow rockfish were one of 10 different groundfish species that were declared overfished, and trawl boats were restricted from catching them.

So, for decades, a huge haul of widow rockfish was both impossible and illegal. But now, the fish are coming back – much faster than anyone expected.

“It’s really amazing to see,” Retherford said. “Over a 20-year period we’ve seen an incredible comeback of a species.”

He’s now learning to catch the fish he used to avoid, and looking to his dad for advice on where to find them.

Cutting Back The Fishery

“When I first got into fishing and had my own boat, we primarily fished rockfish,” he said. “That’s where we made our living.”

Groundfish trawlers catch more than 100 different species – including all kinds of rockfish. When 10 of those species were found to be overfished around the year 2000, the entire fishery was declared a federal disaster.

Catch limits were cut back and thousands of miles of the ocean were closed to trawl fishing.

There were too many boats and not enough fish to go around, so the fishing industry itself bought back dozens of permits to reduce the number of boats on the water just to keep the fishery alive.

The elder Retherford says he watched the fleet continue to shrink around him as fishery managers then launched a whole new system of regulations called catch shares.

With all the new rules and restrictions, he says, the fish have bounced back, but a lot of fishermen haven’t.

The fishermen who managed to hang on now have to count and keep every fish in their net with a federal observer on board policing their catch.

Jason Cope, a fisheries biologist with the National Marine Fisheries Service (NMFS), says scientists were surprised by how quickly some rockfish species reproduced – even when their populations were low.

“We thought it might take a century or so for them to rebuild themselves, but it’s now taking maybe a decade,” he said.

The populations of several Pacific groundfish species that were labeled “overfished” are bouncing back decades ahead of schedule.
CREDIT: Michael Bendixen/OPB

Managers have removed seven species from the overfished list, and this year they doubled the catch limits for fish that had been severely restricted.

Peter Frey is one of the federal biologists with NMFS that survey the fish every year to keep a population count of each species. His data tells fishery managers how to set catch limits that tell fishermen how much they can catch.

He says the survey is another big difference in how the fishery is managed now to prevent overfishing.

“There wasn’t lot of management before the late ‘90s,”  he said. “So, in the ‘80s, early ‘90s, there were a lot of boats out here fishing really hard on rockfish stocks. That was OK for a while but then things really took a downturn.”

Over the years, he’s watched the fish bounce back from that downturn. Now, their surveys show many rockfish populations are booming.

So, for the first time in decades, fishermen are allowed to catch quite a bit of rockfish. With the new regulations, the fishery is now certified sustainable by the Marine Stewardship Council, with fishermen catching a limited percentage of the total fish population.

Now the industry faces a new problem, according to Andrew Bornstein with the Bornstein Seafoods fish processing plant in Astoria.

“How do we market it?” he said. “Here’s a product that’s been off the market for over 20 years …that’s caught by local fishermen, processed right here in Astoria, and people still are like, ‘What is it? I don’t know that. Maybe I’ll just buy some tilapia that I’m more familiar with.”

Bornstein says when rockfish collapsed, fish markets and grocery stores found other white fish to fill their shelves. Much of it comes from overseas. Now that the rockfish are back, he says, he needs more customers before he can buy all the fish that fishermen are allowed to catch.

“We have room to catch way more of our own American resource, but the American public has just kind of forgotten about us,” he said. “So, we’re in this reintroduction phase.”

As the market adjusts to the rockfish rebound, Mikey Retherford Jr. says it’s exciting to be able to catch the fish he used to avoid.

“Something that you were scared to touch now you can harvest,” he said. “It just brings a lot of hope for the future.”