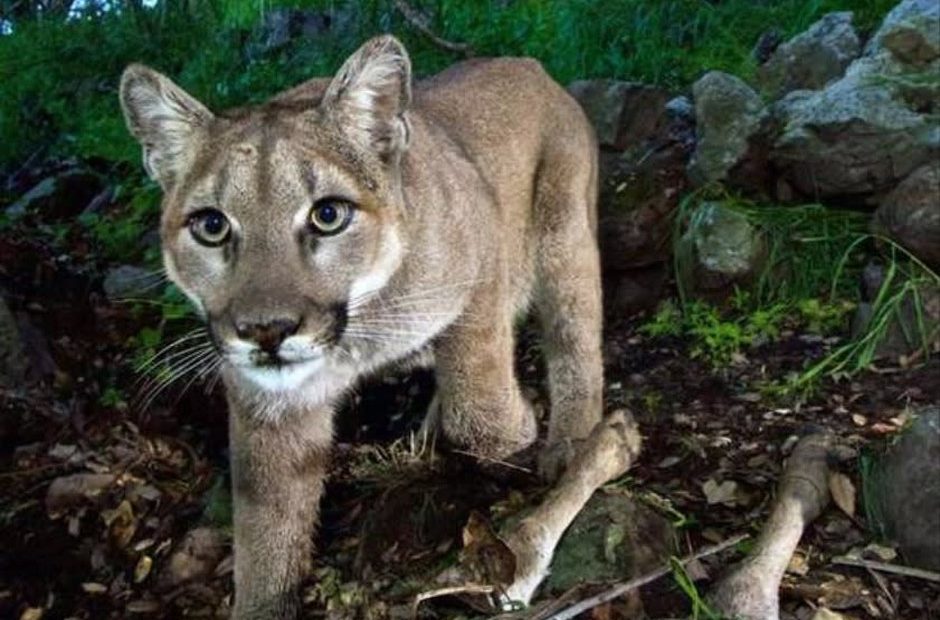 It’s hard not to notice that cougars are making it into the news these days. It’s also hard to miss how they’re getting there: by entering neighborhoods and putting residents on edge.

A cougar was shot this weekend near Cascade Locks in Oregon after lingering near a car, preventing a mother from reaching her infant inside. Earlier this month, a cougar was shot on a homeowner’s property near Bridal Veil after killing two goats. Another was seen in the Post Canyon neighborhood of Hood River. And in Sandy, security cameras captured a lone cougar passing through the suburbs. Although not unheard of, it can seem surprising to have so many encounters in a smaller region.

So are there more cougar sightings? Probably not, but theories are emerging to explain the uptick. 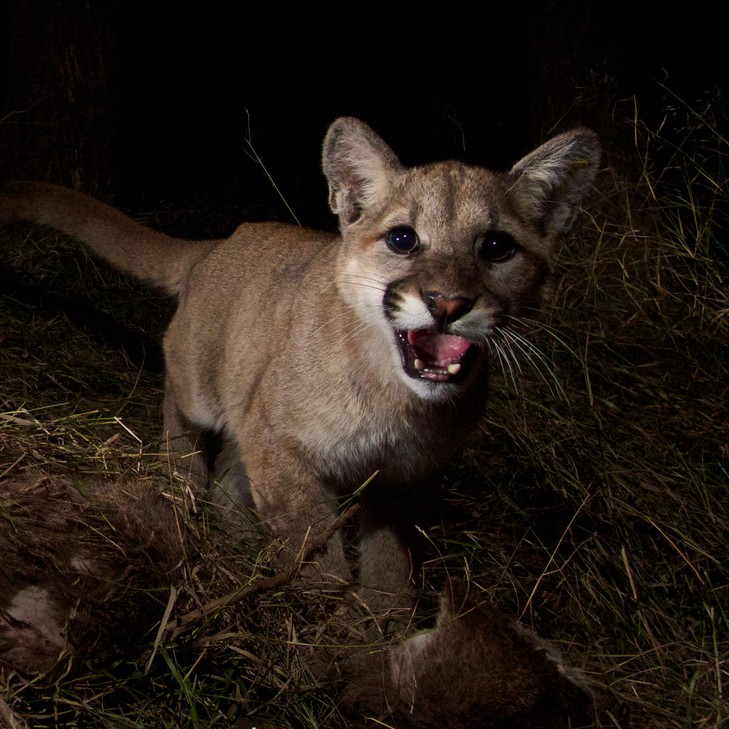 A 10-month-old cougar is startled by a trail camera in the California mountains. The Oregon Department of Fish and Wildlife includes juvenile cougars in their total population estimates. CREDIT: NATIONAL PARK SERVICE

Deputy Joel Ives works for the Hood River County Sheriff’s Department, which dealt with the cougar in Cascade Locks. He speculated that the Eagle Creek Fire could have driven cougars, which are also called mountain lions, down from the hills. Rob Wielgus, a predator biologist formerly with Washington State University, said that could be a factor in the recent batch of sightings. Wielgus used to work on a project that tracked collared cougars in Washington. Those cougars frequently left areas after a large fire and were found close to town, returning to the woods after a few years.

“The cougars are just following their prey,” Wielgus said. “If the prey are displaced into town, then the cougars are going to follow them.”

It’s also fawn season, Wielgus noted. Cougars prefer to target easy prey, like fawns and other baby animals. But those don’t feed the big cats for quite as long as adult animals, so the cats need to hunt more often, making them appear more active in early summer than other times of year.

Although this might seem like a large number of cougar conflicts, it isn’t that rare for wildlife officials in Oregon to lethally remove the big cats.

In 2017, there were 462 complaints of problem cougars in Oregon; 175 cougars were killed. In 2016, Oregon killed 169. The number of problem cougars killed in the state has risen steadily since 1992, though most of those cougars were killed for eating livestock, not harassing people. Per ODFW data, the number killed for reasons related to human safety remained relatively steady from 1995-2014.

Still, conflicts have been increasing. Cougar populations have been rising steadily since the big cats were hunted almost to extinction in the 1960s. Today, the Oregon Department of Fish and Wildlife estimates there are more than 6,600 cougars in the state, including kittens. While some wildlife management professionals believe that number is an overestimate, it’s undeniable that cougar populations have recovered. In the past, ODFW has blamed increased cougar encounters on this population growth: The more cougars there are, the more cougars will inevitably be forced into suburban areas and into conflict with humans.

But cougars aren’t the only large predators on the move. Humans are moving, too, and they’re moving into cougar territory.

“When human habitation or recreation is occurring in prey-rich areas, that’s where you see the cougars,” Wielgus said.

Since 1990, more than 60% of new homes built in Oregon, California and Washington were constructed in what officials call the “wildland-urban interface” — the edge of the woods. Predictably, this is where most, but not all, cougar conflicts take place. Hood River and Cascade Locks both border national forest land, and the cougar in Sandy was seen in a development on the edge of town, also bordering farmland and forest.

People are spending more time outside exploring the woods than ever, too, which means there are more opportunities to encounter the big cats. Backyard trail cameras and security cameras are more common, too, so cougars that may have once passed through towns unnoticed are now spotted by digital eyes. That may help explain the cougar sightings reported recently in the Sandy neighborhood as well.

The Hood River County Sheriff’s Department is still waiting to hear if the cougar it killed was sick or healthy, young or old. There are many theories about what leads to a problem cougar. (Perhaps, some speculate, ill cougars are more likely to attack because they’re desperate. Or younger, more experienced cougars might be more willing to risk human encounters.) But cougar attacks on humans are so rare that Wielgus said there’s realistically no good data on what makes good cougars go bad.

The Cascade Locks cougar seemed to have little fear of humans and became harder to scare off each time officials confronted it. That factored into Hood River County’s decision to lethally remove the animal. “Over the period of time we had those sightings, we saw a marked change in its behavior,” said Deputy Ives.

By the third encounter, the cougar wasn’t scared by a flashlight or flashing police lights. It wasn’t until officers chased it with a police car, sirens on, that the animal ran off.

Cougar attacks are extremely rare, but if you live or recreate in cougar country, there are a few easy ways to keep yourself safer. The Oregon Department of Fish and Wildlife has an advice page for those who live in cougar country. It suggests bringing pets indoors at night and keeping livestock safe with shelters or tall fences.

If you only recreate in mountain lion territory, you’re even less likely to encounter a cougar. Most cougar attacks have been on mountain bikers or runners, who can trigger the predator’s instinct to chase. Wielgus carries bear spray when he explores Oregon’s mountains, and his daughter does the same on her trail runs.

If a similar cougar were spotted in Wielgus’ neighborhood in Bend, and it wasn’t harassing pets or harming livestock, he said he’d let it be. “A well-behaved adult cougar can be the best neighbor,” Wielgus said, because they keep other cougars, who might not know to fear humans, out of their territory. There’s some research that shows that when you kill one such animal, two or three others can come in to take their place. 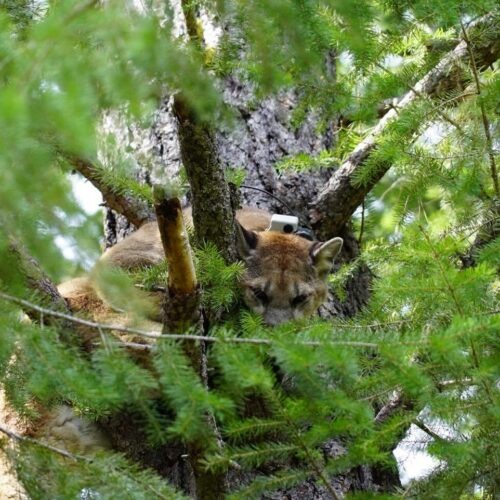 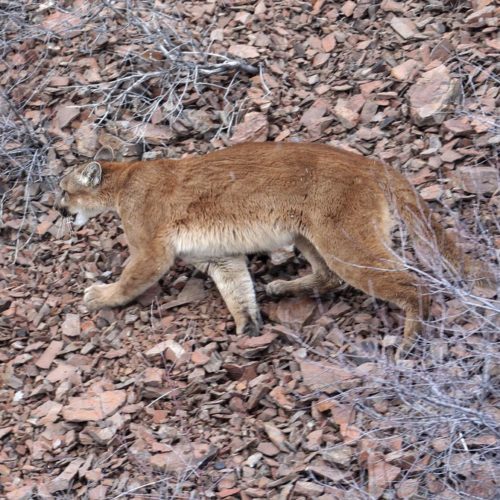 The search is on for the cougar suspected of killing a hiker near Mount Hood. It is the first confirmed fatal attack by a wild mountain lion in the state. The Oregon Department of Fish and Wildlife plans to use mules and dogs to search for the mountain lion. Continue Reading Hunt Planned For Cougar Suspected Of Killing Oregon Hiker