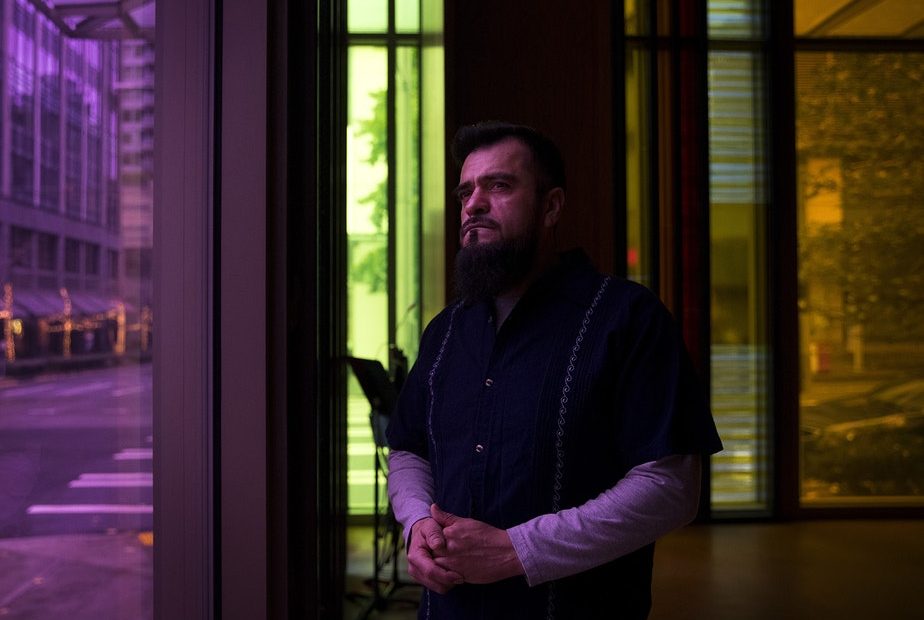 He’s Been Living In A Seattle Church For A Year. ICE Detained Him At Immigration Check-In

An audible gasp came first. Then tears, as Robles’ family received news that Jose had been detained.

For over a year, Jose Robles has spent his days in sanctuary at Gethsemane Lutheran Church in downtown Seattle.

Robles is an undocumented immigrant. He has a pending U-visa — that’s for victims of a crime. But he’s been in U.S. for about 20 years.

On Wednesday, he was supposed to check in with immigration officials on his case. If he wanted a chance to stay legally, he had to show up.

Friends, family, and the community knew there was a very real possibility he would be detained or deported.

Despite a constant drizzle, around 100 people walked with him and his family from Riverton Park United Methodist Church to the ICE office in Tukwila, with posters, T-shirts, and banners of support.

Before entering, Robles said in Spanish: “I’m nervous but I have decided to do this.” He wrung his hands and gave a small smile.

“We must have faith. We must keep fighting.”

Media were not allowed inside the immigration building but organizers and lawyers gave updates every few minutes.

The community of faith leaders, immigration advocates, and supporters sang quietly as they waited: Paz, quremos paz y libración, en este mundo. Peace, we want peace and liberty in this world, they harmonized.

Suddenly, an organizer came down to talk to the family. They gasped and broke into tears — his wife Susana, his daughter, and their grandchildren were present.

Sandy Restrepo from Colective Legal del Pueblo, and Robles’ lawyer, said he would be transferred to the Northwest Detention Center in Tacoma. She said he began to cry when he understood he was being detained but he also asked her to share something with the community: “It’s going to be okay.”

The crowd began chanting new songs: We are not afraid, we will fight for liberation. We will die for liberation, because we know why we were made.

As they sang, the drizzle intensified to steady rain.