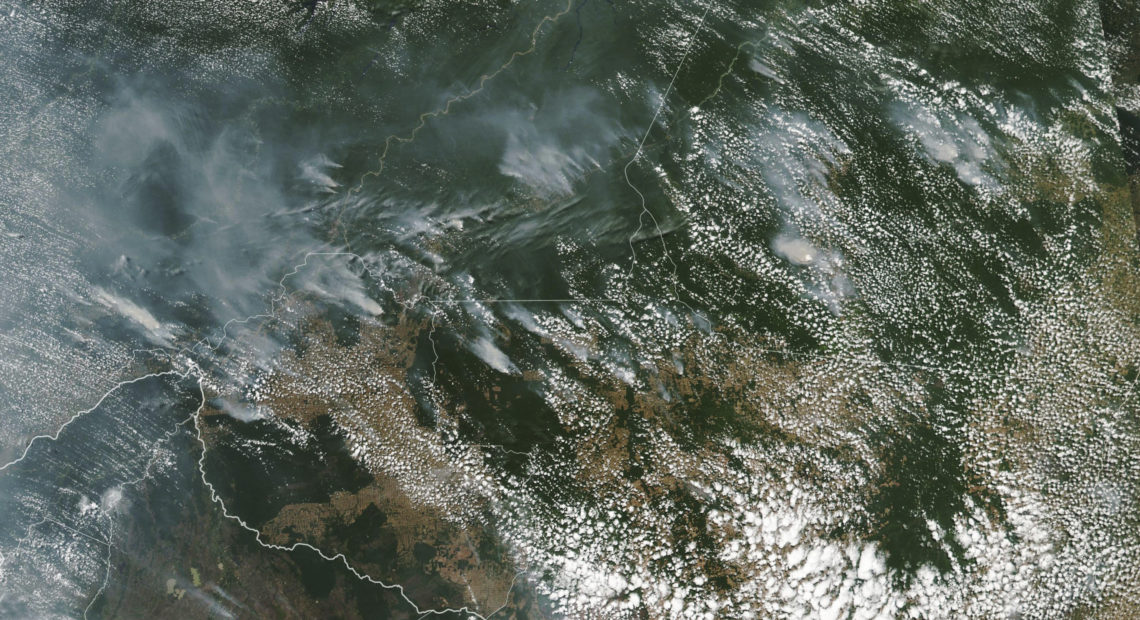 Tens Of Thousands Of Fires Ravage Brazilian Amazon, Where Deforestation Has Spiked

PHOTO: Several of the fires burning in the Amazon rainforest can be seen even from space, as evidenced by this satellite image provided by NASA earlier this month. Brazil’s National Institute for Space Research said the country has seen a record number of wildfires this year. CREDIT: NASA via AP

Fires in Brazil’s Amazon rainforest are proliferating at an alarming rate.

That’s the gist of an announcement this week by the country’s National Institute for Space Research, or INPE. According to the agency, there have been 74,155 fires in the Brazil so far this year — most of which erupted in the Amazon. That represents an astonishing leap of more than 80% over last year, and by far the most that the agency has recorded since it began compiling this data in 2013.

Over half of those fires, or nearly 36,000 of them, have ignited in just the past month. That’s nearly as many as all of 2018 combined. Smoke from the fires has darkened the skies over major Brazilian cities such as São Paulo.

Brazilian President Jair Bolsonaro has signaled unconcern about the situation. The far-right leader, who took office in January, has repeatedly lambasted Brazil’s environmental regulations as an impediment to economic development, and under his tenure environmental agencies have seen diminished staff and funding. That includes the INPE itself, which had its leader, Ricardo Magnus Osório Galvão, canned earlier this month because — according to Galvão — he questioned how Bolsonaro was using his agency’s data.

Asked about the fires by local media, Bolsonaro baselessly suggested that nongovernmental organizations have been setting the fires themselves as retaliation for the scaling back of Brazil’s usual funding support for them. He posited that these groups are trying to increase international pressure on his government — but when reporters pressed him on the point, he didn’t name any specific NGOs or offer any proof for his assertion.

The Amazon rainforest—an irreplaceable part of what makes life on Earth possible—is burning at a record rate.

Global CO2 emissions are at a record high.

Last month was the hottest month on our planet in recorded history.

We are in a climate emergency.
https://t.co/2PMThKPDh5

“So, there could be…, I’m not affirming it, criminal action by these ‘NGOers’ to call attention against my person, against the government of Brazil. This is the war that we are facing,” he said Wednesday in a Facebook Live, according to a translation by the BBC.

He added that his government is “not insensitive” to the fires, and that his government may look into measures to combat them. In a tweet Tuesday, Brazil’s environment minister, Ricardo Salles, attributed the fires to “dry weather, wind and heat” and said federal officials are available to help and “already in use.”

But a lot of deforestation has less to do with natural factors and more with human activities. The INPE says the amount of land that was deforested last month alone represented a nearly 300% surge over deforestation in June 2018.

As NPR reported in 2015, deforestation such as this is often tied to subsistence farming and ranching, which uses more than two-thirds of Brazil’s deforested land — and which has tripled the number of cattle in the country in the past three decades.

“We estimate that the forest areas in the Brazilian Amazon have decreased something between 20 and 30 percent compared to the last 12 months,” Carlos Nobre, a researcher at the University of São Paolo, tells German broadcaster Deutsche Welle.

Fluvio Mascarenhas, who works at a government agency named Chico Mendes Institute for the Conservation of Biodiversity, tells NPR’s Philip Reeves that operations the agency usually carries out against illegal loggers and ranchers have been drastically scaled back this year. And that, he says, together with Bolsonaro’s comments, only encourages further illegal activity in the rainforest.

And that has him afraid.

“Every time you look at a satellite image of the forest,” he tells Reeves, “you see another little piece missing.”