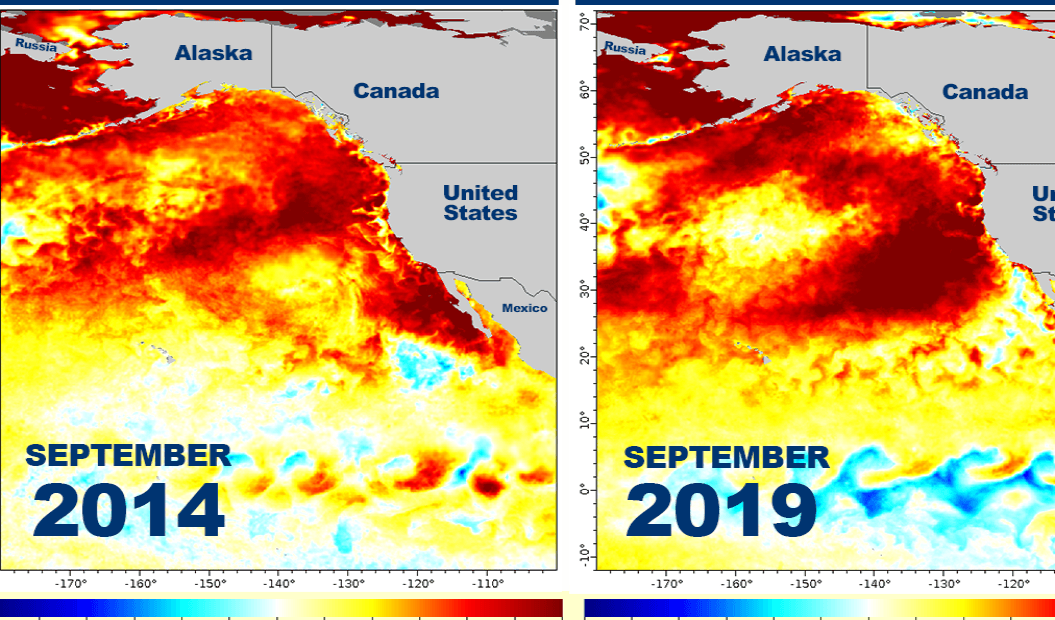 Return Of ‘The Blob’? Marine Heat Wave Similar To 2014 Disruption Shows Up On West Coast

Scientists have detected a marine heat wave off the West Coast that they say is reminiscent of the massive stretch of warm water nicknamed “the Blob” in 2014-15.

The warm water stretches from Alaska to California, covering an area that’s almost as large as the Blob and still growing.

“It’s on a trajectory to be as strong as the prior event,” said Andrew Leising, a research scientist at NOAA Fisheries’ Southwest Fisheries Science Center in La Jolla, California. “Already, on its own, it is one of the most significant events that we’ve seen.”

The marine heat wave in 2014-15 sent water temperatures up to nearly 7 degrees Fahrenheit higher than normal. It caused massive harmful algae blooms that shut down crab and clam fisheries up and down the West Coast. It affected food availability in the ocean, which resulted in many young sea lions left stranded on beaches by parents searching for food. Warmer waters led humpback and other whales to feed closer to shore, which in turn caused record numbers of them to become entangled in lines from crab traps and other fishing gear. They also brought a baffling proliferation of an unfamiliar, pickle-shaped creature known as a pyrosome.

“We learned with the Blob and similar events worldwide that what used to be unexpected is becoming more common,” said Cisco Werner, NOAA Fisheries director of scientific programs and chief science adviser. “We will continue to inform the public about how the heat wave is evolving, and what we might anticipate based on experience.”

Nate Mantua with the Southwest Fisheries Science Center says the warm water is the result of unusual weather patterns that have caused winds to be weaker than normal for months.
He says scientists don’t know if that’s connected to the human-caused climate change that’s warming the planet.

“We don’t know if the weather pattern is,” he said. “We do know there is an underlying warming that has boosted ocean temperatures every year.”

Chris Harvey, a biologist with the Northwest Fisheries Science Center, says water temperatures in the ocean have warmed to about 5 degrees above normal.

“Given the severity of the last marine heat wave, the Blob, we definitely felt like it was our responsibility to say this is something we’re concerned about and we’re going to continue watching it with regular monitoring along the West Coast,” he said.

Harvey said scientists were able to anticipate some of the ecological impacts of “the Blob” but not all. For example, they didn’t expect to see more whales getting entangled in fishing gear as they swam closer to shore in search of a meal.

Scientists expect the heat wave to hurt salmon populations and the fisheries that depend on them. It could also cause a shift in marine species to cooler waters.

Nick Bond, a research meteorologist with the Joint Institute for the Study of the Atmosphere and Ocean in Seattle, said weather patterns in the region around Alaska and the Bering sea have been unusually warm in recent years. Scientists with NOAA are reviewing impacts documented during the Blob to compare them against the effects of the emerging heat wave.

“There are definitely concerning implications for the ecosystem,” said Bond, who is credited with naming the Blob. “It’s all a matter of how long it lasts and how deep it goes.”