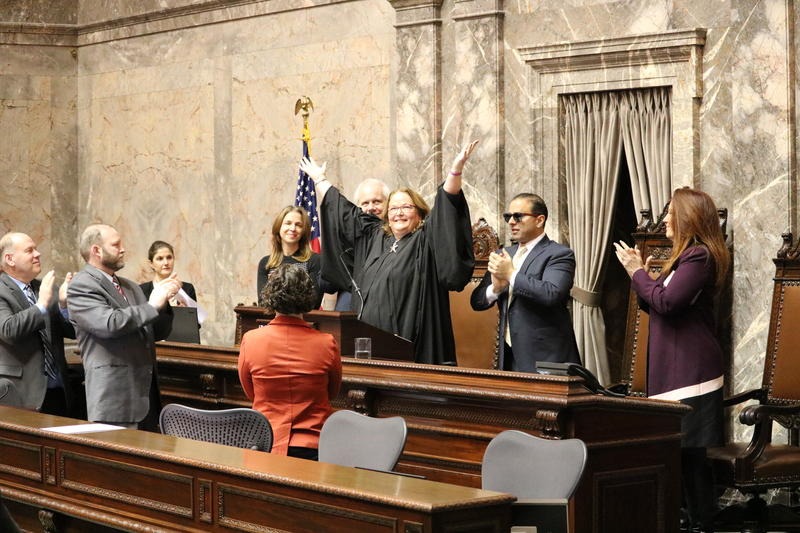 The chief justice of the Washington state Supreme Court, Mary Fairhurst, will retire in January as she continues to battle her third bout of colon cancer since 2008.

In a statement Thursday afternoon, Fairhurst said: “It is with a clear head and a sad heart that I have made the decision that it is time for me to leave the Court.”

Fairhurst, who was first elected in 2002 and named chief justice in 2016, has continued to work and lead the court while undergoing chemotherapy.

“It has been my honor and privilege to serve as a justice of this court since 2003, particularly as the Chief Justice for the past three years,” Fairhurst said in her statement.

Before joining the court, Fairhurst was an assistant state attorney general. At the start of her career, she clerked for two Washington Supreme Court justices.

Last October, Fairhurst wrote the lead opinion in State v. Gregory, a case that overturned Washington’s death penalty statute on grounds that “it is imposed in an arbitrary and racially biased manner.” The court ordered all death sentences converted to life without parole.

In 2006, Fairhurst was among four justices who dissented in the Andersen v. King County case which upheld Washington’s ban on same-sex marriage. In her dissent, Fairhurst wrote: “I would hold that there is no rational basis for denying same sex couples the right to marry.” In 2012, majority Democrats in the state Legislature passed a law allowing same sex couples to wed.

Earlier this year, in her “State of the Judiciary” message to the Legislature, Fairhurst highlighted a number of judicial branch accomplishments during the previous year aimed at making the court system more “fair, efficient and accessible.”

They included the adoption of new rules to make it more difficult for racial and ethnic minorities to be dismissed as potential jurors and the development of a new online calculator to help judges set court fines and fees that low-income defendants could afford to pay.

In that same speech, Fairhurst also identified challenges facing Washington’s court system. They included a lack of funding for language interpreter services in courts, as well as a lack of education and training opportunities for court officers.

Recently, Fairhurst, who is the third woman to serve as chief justice, was featured in a new exhibit called “Ahead of the Curve” from Washington’s Secretary of State’s office. The exhibit celebrates the contributions of women to Washington state on the eve of the 100th anniversary of the ratification of the 19th Amendment which guaranteed women the right to vote.

In her letter of resignation to Gov. Jay Inslee, Fairhurst’s determination in the face of her cancer came through.

“I want to assure you that I am not leaving to die but, rather, I am leaving to focus on my health and to enjoy time with Bob, my family, and friends,” Fairhurst wrote.

In a statement, Inslee praised Fairhurst for her “commitment to serving justice for all Washingtonians.”

“She has led on access to justice for low-income individuals and families, enhancing opportunities for women and minorities in the legal profession and working to increase public legal education for children and youth,” Inslee said.

Inslee, a Democrat, will appoint a replacement to finish out Fairhurst’s four-year term. That new justice and a new chief justice, who the court will select next month, will be sworn in at the beginning of January, according to the court.

Fairhurst’s seat will be up for election in November 2020.

The last appointment to the Washington Supreme Court was Justice Mary Yu in 2014.