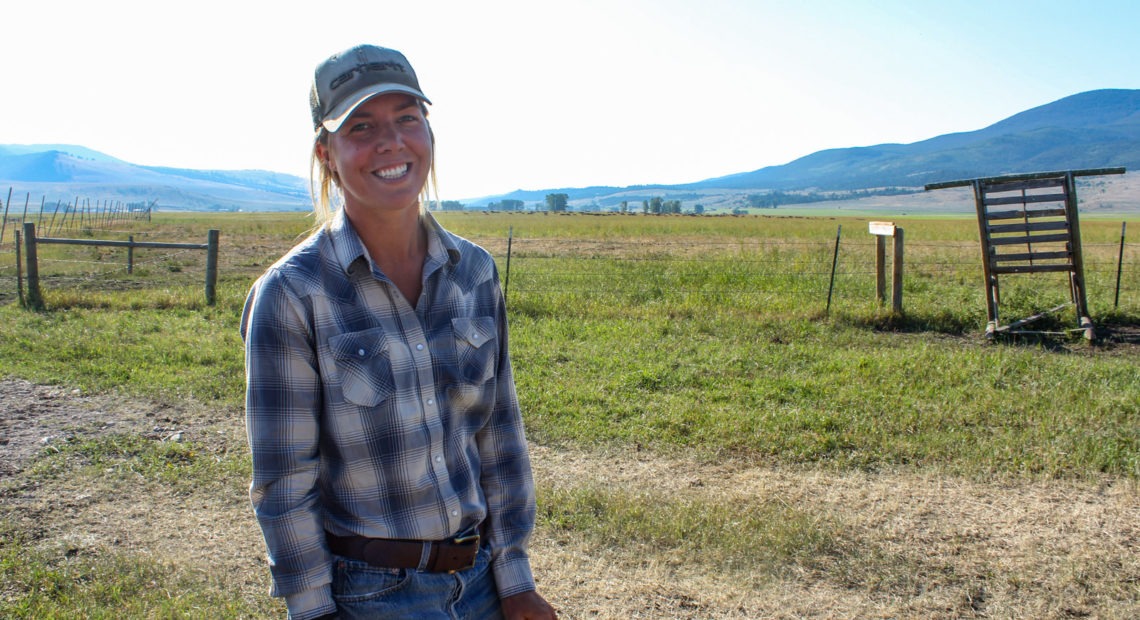 People on Medicaid who work rural seasonal jobs in Montana are wondering about the future of their access to health coverage. Montana recently passed a law that, if it gains federal approval and goes into effect as planned in January, would require many Medicaid recipients to prove they work a set number of hours each month.

Kate Clyatt is one of those seasonal workers. She’s 28 and works as a ranch hand in the unincorporated community of Helmville, Mont., where there’s a saloon, rodeo grounds, two churches, a K-8 public school and a post office. In the sweeping ranchland surrounded by mountains, there are also a lot of cows.

On a typical morning, Clyatt is moving cattle — coiling up an electric fence on a spool and whistling to encourage the herd to move along.

She wears a snap-collared flannel shirt tucked into bluejeans, and a sweat-stained cap that keeps the sun from her eyes. She also wears a brace on her right wrist — support for an injury she got when she rolled a four-wheeler a couple weeks earlier.

Clyatt explains that she stayed on her parents’ health care plan until she was 26, as allowed by the Affordable Care Act. Then, when she aged out, she signed up for Montana’s expanded Medicaid program.

“Ranching is just not a job with a lot of money in it,” Clyatt says. “I don’t know at what point I’m going to be able to get off of Medicaid.” To qualify for Montana Medicaid, a program jointly funded by the state and the federal government, individual adults must make no more than around $17,000 dollars a year.

Herding cattle is a hard way to make a living, Clyatt says. But, like a lot of Montanans, she loves working outside.

“There’s a lot of seasonal work in our parks,” Clyatt says, “in our forest systems, guiding — bringing income into this state. I mean, there is just a lot of seasonality to a lot of the quintessentially Montana jobs.” Such work and income may ebb and flow, but the need for medical coverage doesn’t.

Clyatt doesn’t keep track of her work hours; she gets paid by the month. And she’s unclear how that might fit into Montana’s new law that says certain Medicaid enrollees need to prove they work or do other “community engagement activities” for at least 80 hours a month to receive care.

Those required “community engagement activities” can also include vocational education, substance use disorder treatment and community service, among other options.

A part of Montana’s new law does attempt to carve out exemptions for workers in seasonal jobs, but the state health department is still developing what that will look like.

Those who don’t meet the exemptions will have to report their compliance with the requirements. For rural workers like Clyatt, that constant reporting could be difficult — she only gets cell service at the stop sign on the edge of town.

When work and reporting requirements went into place in Arkansas last year, 18,000 people lost health coverage. Arkansas, Kentucky and New Hampshire all have seen their “work requirement laws” blocked this year, as a federal judge raised questions about what the policy could mean in terms of a potential loss of health care coverage.

Backers of the work requirements in Montana say a legal fight may also challenge the policy, which narrowly passed in the state’s 2019 legislative session. But until that happens, or the Supreme Court takes up one of the other state’s cases, Montana will keep rolling out its plan.

Heather O’Loughlin, with the Montana Budget and Policy Center, an organization that advocates for social services for people who have low incomes, says health coverage losses like those experienced in Arkansas are expected in Montana too.

“There are going to be a number of enrollees that will be subject to these requirements,” O’Loughlin says. “And what we’ve seen in other states — Arkansas in particular — is that the vast majority of those that are subject to the requirements … often have challenges in reporting their hours.”

After Montana state health department officials watched around 17,000 people in New Hampshire fail to comply with that state’s policy, Montana increased its estimate of how many residents it expects its own new law to impact.

State officials now project 4-12% of current Medicaid enrollees will be affected: They will either fail to meet the work requirements in the law, or won’t comply with the monthly reporting process regarding their work hours and status. That means up to 12,000 people could lose health coverage in Montana. (Like most adults on Medicaid across the U.S., the majority of enrollees in Montana are already working.)

The work-requirements policy passed the Montana legislature with unanimous support from Democrats and in May was signed by Gov. Steve Bullock — also a Democrat, who is now running for president on his track record of political wins in a state that leans conservative.

The policy was a political compromise. Medicaid expansion in Montana was due to expire this summer, and Republicans refused to renew it without a work requirement. Even now, conservative leaders in the statehouse say the bill that passed didn’t go far enough and the work requirements are weak.

But Republican state Rep. Ed Buttrey, who helped push the “work requirements” bill into law, disagrees. He expects some people will lose health coverage, but says the requirements are not meant to be punitive.

“We never set a number of people to try to purposely disenroll,” Buttrey says. “We wanted to find out how many people are truly able-bodied and not working — who should be doing more to benefit themselves and their family, but weren’t.”

The Trump administration, which encourages states to add work requirements to Medicaid, claims such policies could improve health outcomes and get people out of poverty.

Montana submitted its workforce requirement proposal to the federal government at the end of August. According to the program’s timeline, the requirements would start in January 2020, if approved by the Trump administration.