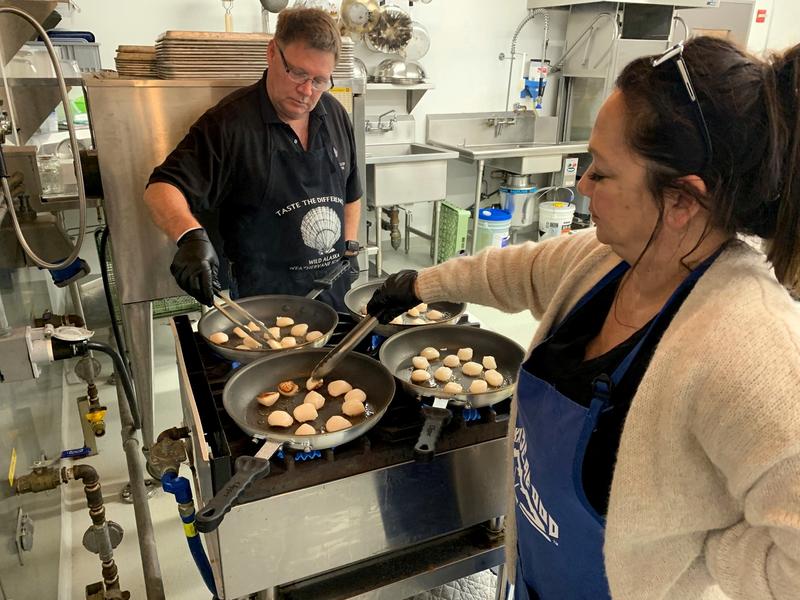 If you ask American consumers whether fresh seafood or previously frozen tastes better, you are bound to get “fresh” as the answer. But blind taste tests conducted by Oregon State University found that fish caught and quickly frozen at sea rated as good or better than supposedly “fresh” fish bought at the supermarket.

Were consumer preferences to change in line with the research, it could help the seafood industry be more environmentally friendly.

“I usually pick the fresh one from the perception of off the sea right away,” said seafood afficiando Tami Tang of Beaverton about her behavior at the supermarket.

“I’d always considered frozen seafood to be inferior both in texture and taste,” added Kasey Richards of Portland.

Tang and Richards were among nearly 100 consumers who took part in a blind taste test of fresh and previously frozen scallops last Friday. Oregon food scientists and chefs put the participants’ preconceptions to the test. The results were surprising. 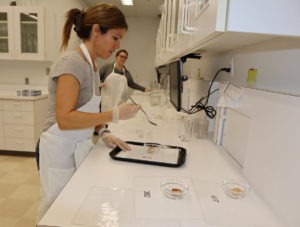 The tasters nibbled on simply prepared seared scallops during the controlled experiment at the Oregon State University Food Innovation Center in Portland. To the sounds of clinking forks and tapping of computer keys, they rated each sample for texture, flavor, aroma and appearance.

At the end of the test, none of the tasters we interviewed could tell which of the scallops they ate were the fresh ones and which were previously frozen. They were both delicious.

“What we found is that the frozen product was actually liked as much as — or significantly, statistically better than — the fresh,” Colonna reported. 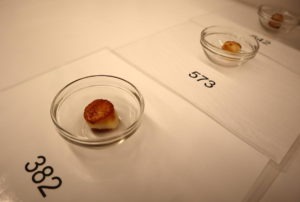 In the blind taste test, it was hard to tell which scallops had been previously frozen. CREDIT: TOM BANSE / NORTHWEST NEWS NETWORK

This project started in 2016 with evaluations of Coho salmon and black cod (aka sablefish). Since then, tasting panels have noshed on high quality fresh and frozen Oregon albacore, sockeye salmon, rockfish and now Alaskan scallops.

Colonna said the results reflect how flash-freezing technology has gotten better to lock in freshness right at sea or minutes after hitting the dock. By contrast, that seafood labeled as “fresh” at the grocery counter may not actually be all that fresh, having possibly spent many days in transit and refrigerated storage.

Colonna concedes it is hard to beat buying fresh seafood at the dock direct from the fisherman who caught it that morning and promptly throwing your purchase on the barbecue, but that’s not an option for most people.

“One third of all seafood is actually thrown away at the counter because people are not buying it quickly enough,” Colonna said in an interview. “I don’t think we have time to continue to waste seafood in that manner. To have more acceptability around frozen product is just going to help everyone.”

Reducing waste is one of many reasons why it matters whether consumers can be convinced to trust and buy frozen seafood. Another reason is the carbon footprint of fresh seafood shipped via air freight.

“As fresh product has to be flown across the oceans, across the United States, across the county somewhere, it’s putting out far more carbon emissions than a frozen product that can be shipped by rail or by a boat or another method like that,” said Tyson Rasor, the fisheries and food systems program manager at the Portland nonprofit Ecotrust.

The fresh-frozen study originated with Ecotrust and was launched with a grant from the National Fish and Wildlife Foundation. Various seafood industry groups and Oregon Sea Grant have since contributed support. 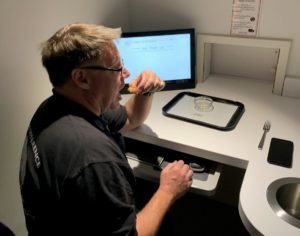 Rasor said this matters to local fishermen because freezing the catch is sometimes the only option in smaller, out-of-the-way ports. And frozen could be more profitable in the long run, provided there is demand. Rather than flooding the market for a short time when the fresh catch comes in, a fisherman could sell frozen seafood over time into regional markets.

“When the tuna come in July through October, we have successfully told the public that it is the fresh time to go get it,” said Nancy Fitzpatrick, executive director of the Oregon Albacore Commission. “Well, now we have to switch them over to say, ‘It’s available year-round. You enjoyed it in the summertime. Now enjoy it in the wintertime as well.'”

Tacoma, Washington-based scallop and crab fisherman Jim Stone said he was glad to see validation of his belief that frozen-at-sea scallops are as good or better than fresh scallops.

“We often get asked by chefs to bring in fresh scallops,” Stone said about his harvest in Alaskan waters. “Because of the logistics and remoteness of where we fish it gets really difficult to do that and to do it for any sort of reasonable price. A fresh scallop can be on a boat as long as 10 days before it even lands at the dock and then it may take another week before it gets to the consumer.”

Stone said his boats use less fuel by harvesting, processing and freezing at sea compared to making frequent trips back and forth to port to deliver fresh catch.

The Oregon researchers see chefs and fishmongers as key constituencies to bring around because they can influence what seafood shoppers choose. More testing lies ahead to figure out which phrasings or outreach will convince eaters to take the bait.