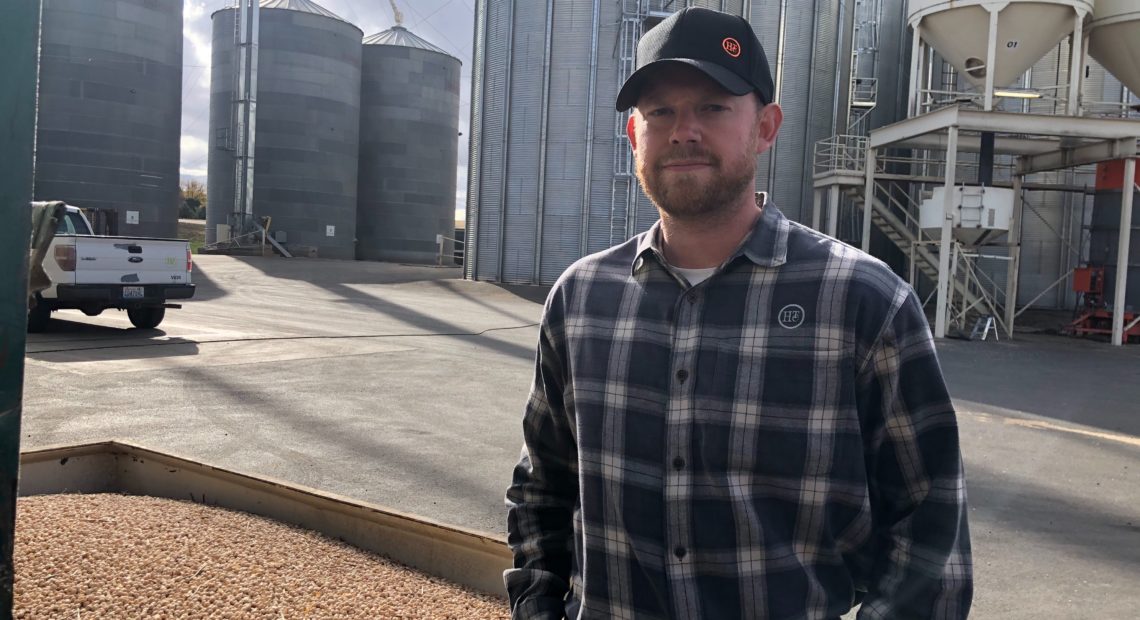 Like Your Hummus Wet? Then You Want Dry Beans. So Do Palouse Farmers Who Grow Garbanzos

Outside Palouse, Washington, it’s mid-autumn and Chad Redman’s combine tractor keeps jamming with rocks it picks up in the field.

Chad and his father, Jim, tug and ratchet at the combine. But nothing dislodges these rocks from the cutting header.

“So we’ll have to go back to the pickup,” Jim Redman grumbles.

Chad is referring to the relentless rains and even an early fall snow that matted down the garbanzo bean plants tight to the land. Running the combine low to pick them up means it will get more rocks, too.

The problems don’t end once the crop is finally cut. 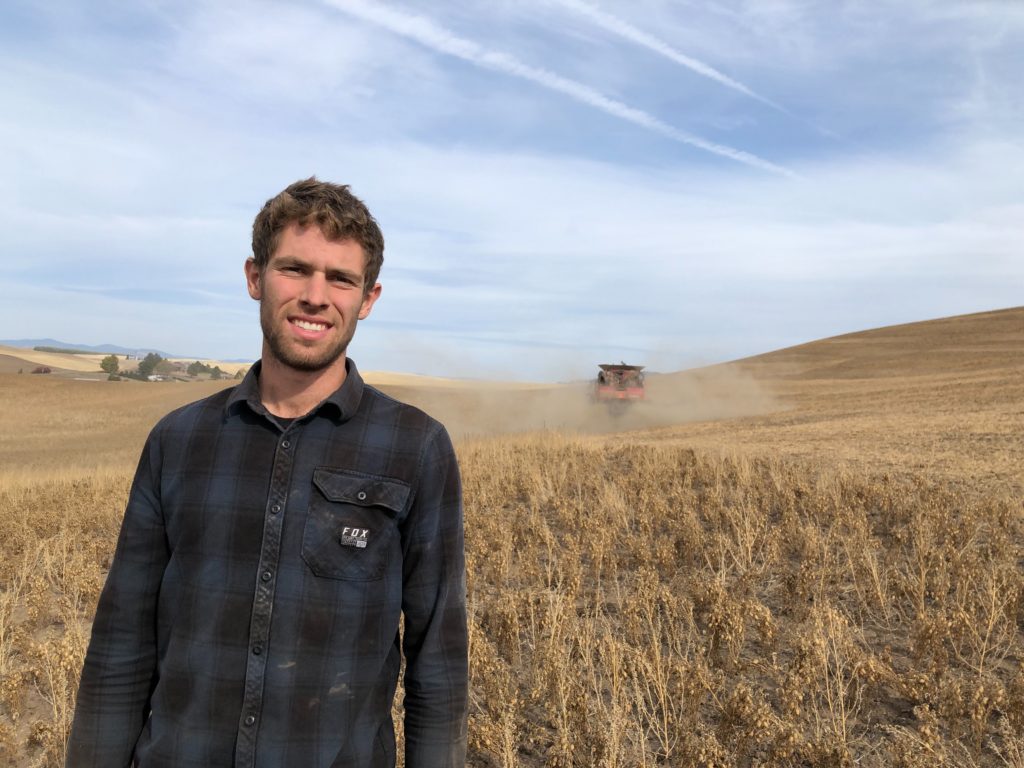 Chad Redman moves rocks ahead of his father Jim Redman driving the combine outside of Palouse, Washington. CREDIT: Anna King/N3

Because of recent fall rain, most of the beans harvested this year weren’t dry enough to be accepted by processors. Redman says his family has been trying to dry out their beans on their shop floor.

“We’ve got just a little utility tractor with a bucket we use to turn them over and load them back into a truck,” Chad says.

His family has been farming since the late 1800s. At age 27,  he’s a fifth-generation farmer.

Usually, a garbanzo bean ready for harvest could break your teeth. But a too-moist bean is tacky, like biting into a gumball. Silos typically won’t take beans above a 12.5% moisture content. In a normal year farmers usually haul in beans with 10 to 11% moisture content. Beans with too much moisture are bound to rot. And black mold can spread through an entire silo in just a few days.

But this unusually wet year, several outfits started accepting the beans at 13% or more, just to help the farmers bring in the last of the harvest.

That means silo or co-op managers have to dry out those beans.

Drying Out The Harvest

At a large industrial yard on the edge of Pullman, workers at Hinrichs Trading are drying those beans around the clock. One dryer looks like a scaled-down railroad train — open-topped cars loaded with beans. Air is forced from below.

Another system looks like a giant popcorn popper and dries the beans in a continuous flow.

Watching over this operation is Kyle Hinrichs. 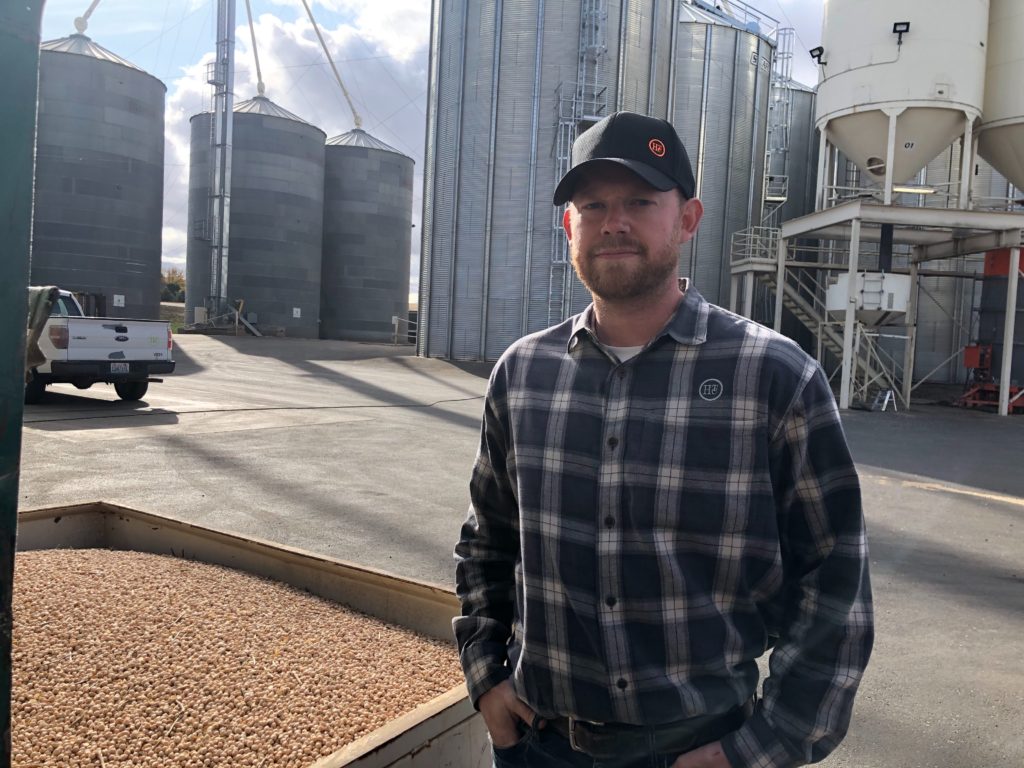 Kyle Hinrichs helps run the family business outside of Pullman, Wash. Right now the company is drying beans as fast as possible with several machines, but it’s an around the clock job. CREDIT: Anna King/N3

Hinrichs is one of the largest garbanzo bean brokers and exporters in the nation. His family has been processing commodities for five generations.

A conveyor belt delivers the beans to a truck once they’re dry.

“So the continuous flow drier is doing 8,000 pounds an hour, but it’s not enough for what we need,” Hinrichs says.

In Montana and the Dakotas — much of the crop is in tough shape, too. The garbanzos were so wet that more than 50,000 acres worth have sprouted. That means the crop is just cattle and swine food. If it molds, it’s thrown away.

Drying these beans can cost the grower half of the market price. Chinese and Indian tariffs due to President Trump’s trade wars have largely shut down farmers’ biggest exports.

Tim McGreevy says bean farmers are frustrated. McGreevy is CEO of the American Pulse Association, which represents lentil, pea and bean growers across the nation. He’s become a sort of unofficial therapist for the farmers he serves.

“Lean Into The Wind”

In a remote field on the Camas Prairie outside of Craigmont, Idaho, Cori Wittman Stitt leans for a moment against the tractor as it fills with diesel. She and her husband have finally finished their garbanzo harvest for the year. But they can’t plant winter wheat until they move some boulders out of this field. 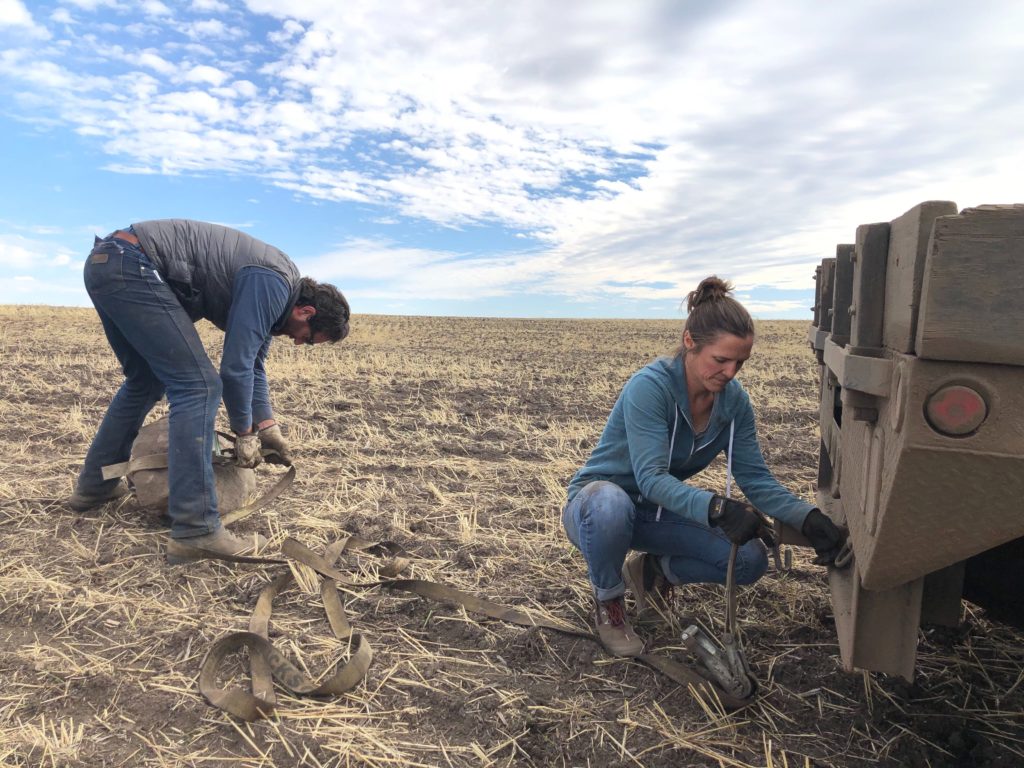 Erik Beottcher and Cori Wittman Stitt wrastle a large boulder to tow it out of a wheat field near Craigmont, Idaho. Relentless rain and an early snow have made harvest and now the planting of their winter wheat extremely tough. CREDIT: Anna King/N3

“So this time of year when we’re under the gun with weather, we’ll go as many hours as we can and plan on sleeping when it rains,” Wittman Stitt says.

She and a farm hand haul a boulder behind a pickup over to what’s called a scab, a big outcropping that rises off the landscape. Farmers have piled rocks here for generations. Yarrow and tall grass bend in the steady wind.

It’s a hard place, in a hard year.

“So the markets have been depressed for several years, but this year takes it to a new extreme,” Wittman Stitt says.

As one producer put it: The only choice now for America’s family farms is to “lean into the wind.”