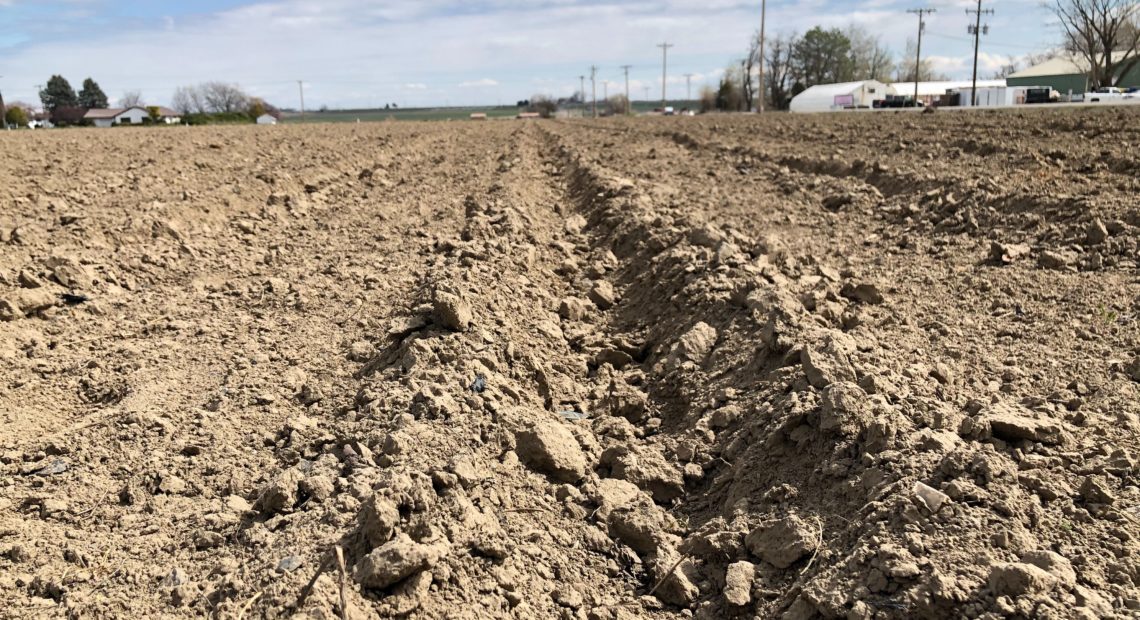 It’s springtime in the Northwest: birds sing, emerald shoots are pushing up from the earth and the irrigation sprinklers tick, tick like clocks — same as always.

But so much else has changed.

Still, spring work starts up, ready or not. And Northwest growers are scrambling to figure out how to work around the global coronavirus pandemic and still bring in the coming harvest.

Farmers wonder: Can they get it done safely?

A good stretch north of Pasco, Washington, Jim Middleton’s farm crew is washing stacks of plastic boxes, called lugs. They rattle as they fall to the concrete, then they’re washed and picked up again. Soon, they’ll be packed with fresh-cut asparagus. The packing shed is a very small space, but workers can keep their distance from one another in the field.

“I don’t think it will be that bad,” Middleton says. “The crews are only one or two people, they are usually family members. We’re not ever congregating into big groups.”

Harvest begins in a few days, and he’s had little time to react. Asparagus harvest is brief and intense. It goes on every day for 10 weeks. Just one or two virus cases could cripple his operation. 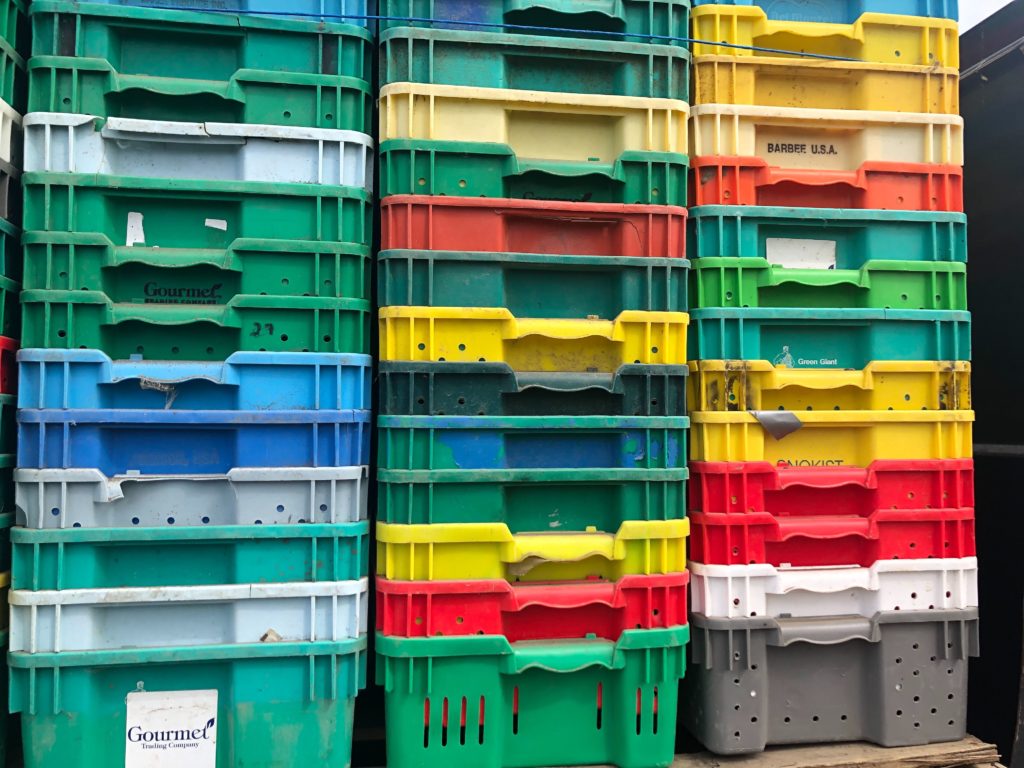 Stacked like colorful LEGOs, plastic boxes called lugs will soon be filled with more than 25 pounds of asparagus each when harvest in the Northwest begins in a few days. CREDIT: Anna King/N3

“So, we can’t take a two-week break in case people get sick,” Middleton says. “Without a regular workforce every single day, we’re going to get backed up quickly and have a lot of product that we wouldn’t be able to pack or sell — that could get upside down in a big hurry.”

Off the record, other farmers say they’re really worried. They can’t find the normal cleaning supplies required by the federal government, pre-pandemic — supplies like bleach for wiping down worker stations.

They’re also worried about training their staff in time, especially in fruit and vegetable processing facilities, where workers often stand shoulder to shoulder.

“We’re going to check people for temperatures coming to work,” Clouse says. He adds that anybody that shows a fever won’t be let inside. “We’ll ask them to go home and quarantine themselves.”

Still to come are some of the Northwest’s most intensive hand-picked crops: cherries and blueberries. They’ll be ready to harvest in late May and early June.

This year’s sweet cherry harvest could turn sour with the coronavirus.

The first hitch is planes. There are fewer and fewer routes to fly people, and therefore less cargo space. This year’s estimated 22 million boxes of cherries will be too perishable to wait. B.J. Thurlby is president of Northwest Cherry Growers, based in Yakima. 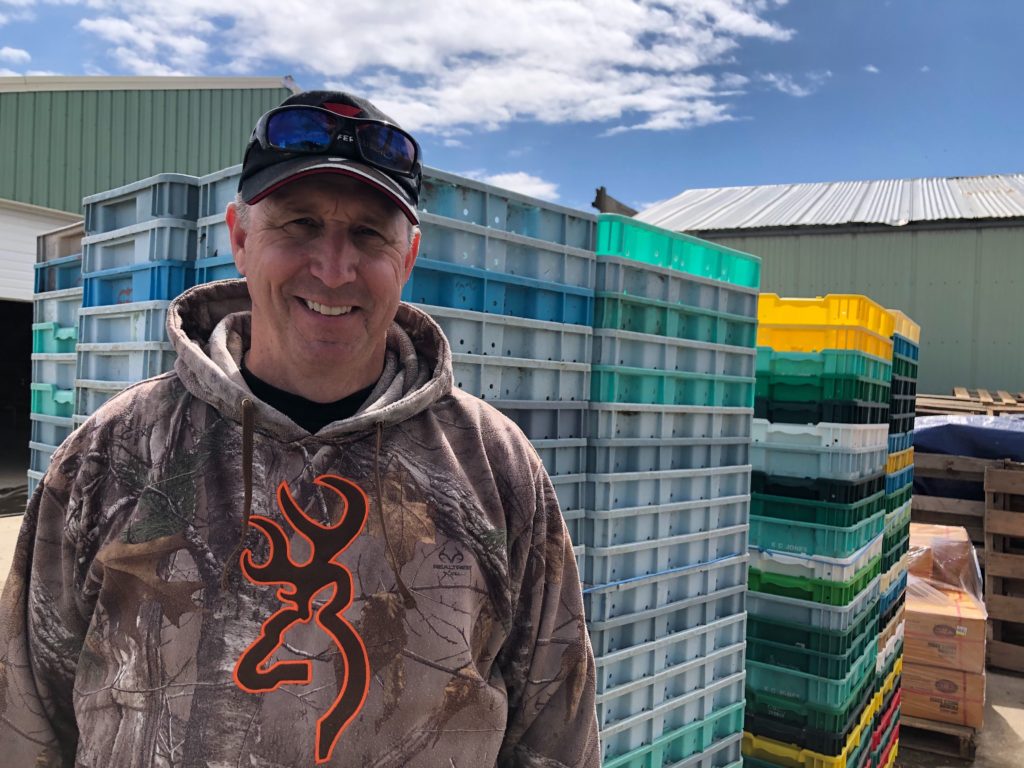 Yet another problem: Thurlby says cherries are often an impulse buy in the store. But these days, more shoppers are buying online and getting groceries delivered.

No Workers, No Fruit

Perhaps the largest problem for growers is the prospect of not enough pickers.

Mike Gempler is executive director of the Washington Growers League, a non-profit advocate for farm labor and employment.

He says since the Trump Administration has tightened the border with Mexico, only certain H-2A visa workers are allowed to come north. Gempler says Northwest growers might be short by as much as 30% of their normal guest workers.

Safely housing them will be a big issue, too. Many usually sleep in bunk beds, four to a room.

“Having hand sanitizer in every room,” Gempler says. “Having disinfectant wipes available at every entry and exit door.”

Another issue to resolve: Crews usually ride to the fields in packed vans.

Upon reflection, Gempler says there may be a solution to the foreign worker shortage. Some of the many locals who recently lost their jobs are driving out to the fields to find work.