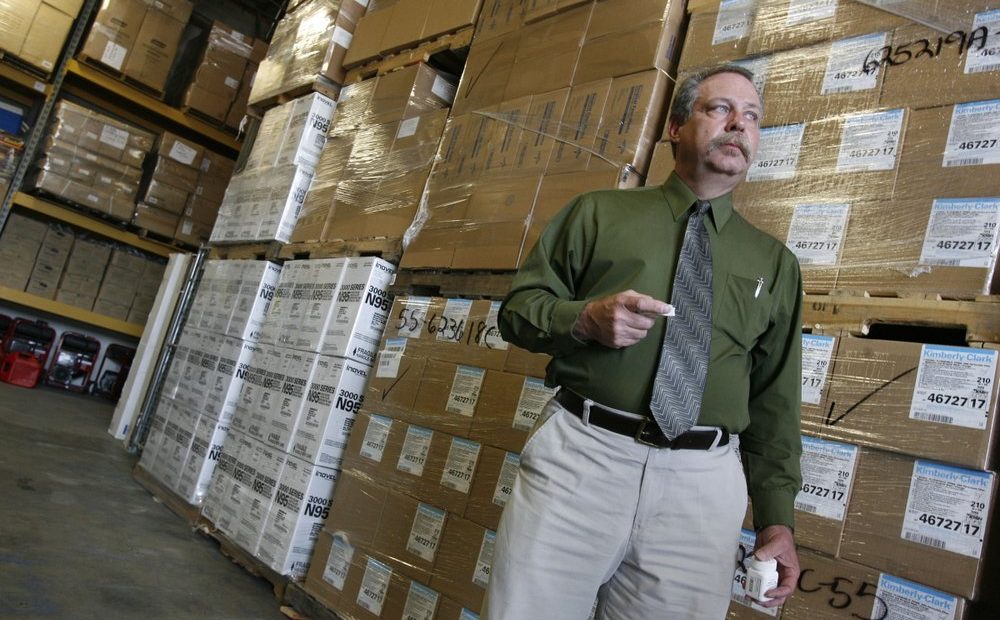 ProPublica is a Pulitzer Prize-winning investigative newsroom. Sign up for The Big Story newsletter to receive stories like this one in your inbox.

Dire shortages of vital medical equipment in the Strategic National Stockpile that are now hampering the coronavirus response trace back to the budget wars of the Obama years, when congressional Republicans elected on the Tea Party wave forced the White House to accept sweeping cuts to federal spending.

Among the victims of those partisan fights was the effort to keep adequate supplies of masks, ventilators, pharmaceuticals and other medical equipment on hand to respond to a public health crisis. Lawmakers in both parties raised the specter of shortchanging future disaster response even as they voted to approve the cuts.

“There are always more needs for financial support from our hardworking taxpayers than we have the ability to pay,” said Denny Rehberg, a retired Republican congressman from Montana who chaired the appropriations subcommittee responsible for overseeing the stockpile in 2011. Rehberg said it would have been impossible to predict a public health crisis requiring a more robust stockpile, just as it would have been to predict the Sept. 11, 2001, terrorist attacks. 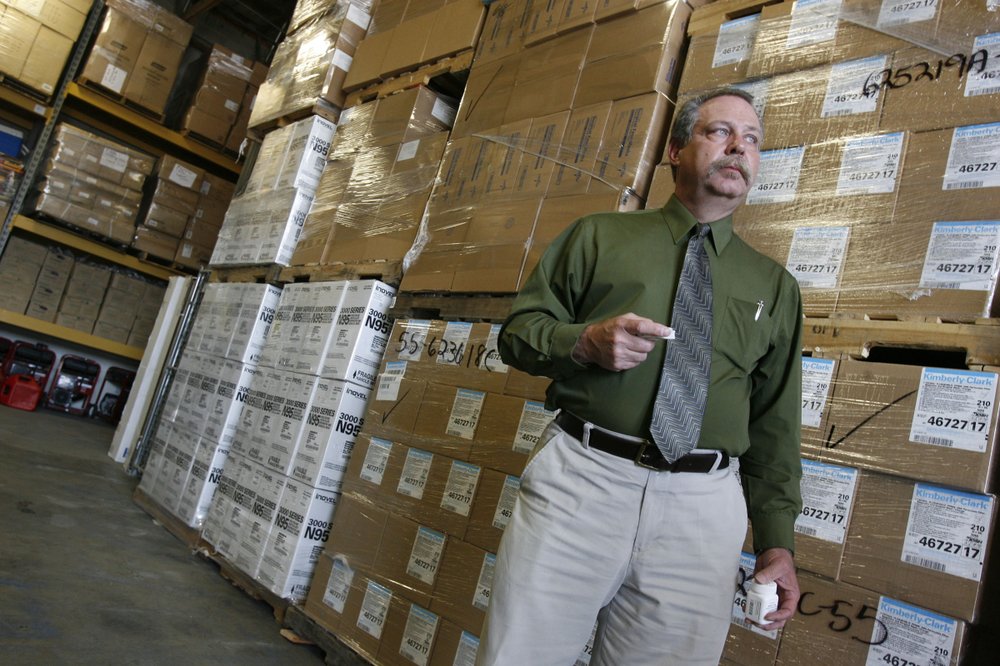 File photo. Don Wood, an official with the Strategic National Stockpile, awaits another truck load of medications in Salt Lake City, Utah during a swine flu outbreak from the H1N1 virus in 2009. The pandemic that year prompted the largest use to date of the stockpile, which was created in 1999. It has never confronted anything on the scale of the current COVID-19 pandemic. CREDIT: Francisco Kjolseth/AP

There were, in fact, warnings at the time: A 2010 Centers for Disease Control and Prevention-funded report by the Association of State and Territorial Health Officials urged the federal government to treat public health preparedness “on par with federal and state funding for other national security response capabilities,” and said that its store of N95 masks should be “replenished for future events.”

By late February, the stockpile held just 12 million N95 respirator masks, a small fraction of what government officials say is needed for a severe pandemic. Now the emergency stash is running out of critical supplies and governors are struggling to understand the unclear procedures for how the administration is distributing the equipment.

The stockpile received a $17 billion influx in the first and third coronavirus stimulus bills that Congress passed in March. But there had not been a big boost in stockpile funding since 2009, in response to the H1N1 pandemic, commonly called swine flu.

After using up the swine flu emergency funds, the Obama administration tried to replenish the stockpile in 2011 by asking Congress to provide $655 million, up from the previous year’s budget of less than $600 million. Responding to swine flu, which the CDC estimated killed more than 12,000 people in the United States over the course of a year, had required the largest deployment in the stockpile’s history, including nearly 20 million pieces of personal protective equipment and more than 85 million N95 masks, according to a 2016 report published by the National Academies of Sciences, Engineering and Medicine.

“We recognized the need for replenishment of the stockpile and budgeted about a 10% increase,” said Dr. Nicole Lurie, who served as the assistant secretary for preparedness and response at the Department of Health and Human Services during the Obama administration. “That was rejected by the Republican House.”

Republicans took over the House of Representatives in the 2010 midterms on the Tea Party wave of opposition to the landmark 2010 health care reform law, the Affordable Care Act, also known as Obamacare. The new House majority was intent on curbing government spending, especially at HHS, which administered Obamacare.

Congressional Republicans, led by Mitch McConnell in the Senate and House Speaker John Boehner, leveraged the debt ceiling — a limit on the government’s borrowing ability that had to be raised — to insist that the Obama administration accept federal spending curbs. The compromise, codified in the 2011 Budget Control Act, required a bipartisan “super committee” to find additional ways to reduce the deficit, or else it would trigger automatic across-the-board cuts known as “sequestration.”

Even in the aftermath of the swine flu pandemic, the stockpile wasn’t a priority then. Without a full committee markup, Rehberg introduced a bill that provided $522.5 million to the stockpile, about 12% less than the previous year and $132 million less than the administration wanted. “Nobody got everything they wanted,” Rehberg said.

The Senate version of the funding bill offered $561 million for stockpile funding. Senators said they regretted the cuts even as they voted for the bill.

“In this bill we’re now getting into the bone marrow,” Tom Harkin, a Democrat from Iowa who then chaired the Senate appropriations committee, said at the markup. “Some of these cuts will be painful and unpopular.”

In the bill’s final version, Congress allocated a compromise $534 million for the 2012 fiscal year, a 10% budget cut from the prior year and $121 million less than the Obama administration had requested.

The next year, the “super committee” failed to secure additional savings demanded by the Budget Control Act, triggering the automatic, across-the-board cuts. This “sequestration” was an outcome that the leaders of both parties disliked — and blamed one another for.

“Did either party ever indicate sequestration was welcome, positive or desirable?” Dave Schnittger, Boehner’s deputy chief of staff at the time, told ProPublica. “Sequestration was conceived — not by Republicans, but by a Democratic White House — as a crude mechanism to compel the super committee to do its job. Republicans consistently advocated for reductions in mandatory spending programs that would have prevented sequestration from ever happening.” (Mandatory spending refers to entitlement programs such as Social Security and Medicare.)

McConnell’s office did not respond to requests for comment.

Katie Hill, a spokeswoman for Obama, pointed to numerous statements he made in 2013 urging Republicans to compromise, warning that the sequester would weaken economic recovery, military readiness and basic public services.

Gene Sperling, then a top Obama economic adviser, said Republicans focused attacks on the HHS budget, along with the Departments of Labor and Education, which are grouped under the same appropriations subcommittee.

“The Labor/HHS budget is where a significant number of progressive priorities are, from Head Start to (the National Institutes of Health) to the Education Department,” Sperling said. “There’s just so much in there, so it is often the hot spot for where conservative budget hawks who don’t believe in public investment go hardest.”

Under sequestration, the CDC, which managed the stockpile at the time, faced a 5% budget cut. In its 2013 budget submission, HHS decreased its stockpile funding request from the previous year, asking for $486 million, a cut of nearly $48 million. “The SNS is a key resource in maintaining public health preparedness and response,” the administration said. “However, the current fiscal climate necessitates scaling back.”

The decrease caught Rehberg’s attention at a budget hearing to review the request.

“Disaster preparedness is something that has been very important to me,” he said at the hearing. “I just would like to have you explain how such a large reduction can possibly not impact the national preparedness posture.”

Then-HHS Secretary Kathleen Sebelius answered that the CDC would prioritize replacing expiring drugs such as smallpox vaccines and anthrax treatments.

The next year, the administration again proposed cutting the stockpile’s funding from the 2012 funding level, but it warned that reduced funding could result in “fewer people receiving treatment during an influenza pandemic.”

Congress did grant extra funding in response to emergencies, but even then, the stockpile was a small-ticket item. In 2014, the Obama administration asked for and received billions of dollars to respond to the Ebola outbreak, but only $165 million went to the CDC’s public health emergency preparedness programs, including the stockpile. And in 2016, Congress granted emergency funding to respond to the Zika virus, but it gave the CDC less than half of what the Obama administration requested.

“It’s clear that the administration prioritized the SNS in this (Zika) request and in the Ebola supplemental,” said Ned Price, who was a spokesman for the National Security Council in the Obama White House. “In the case of Zika, congressional Republicans sat on the request for the better part of a year.”

The stockpile’s mission has steadily expanded as it confronts new public health emergencies. With limited resources, officials in charge of the stockpile tend to focus on buying lifesaving drugs from small biotechnology firms that would, in the absence of a government buyer, have no other market for their products, experts said. Masks and other protective equipment are in normal times widely available and thus may not have been prioritized for purchase, they said.

“It just was never funded at the level that was needed to purchase new products, to replace expiring products and to invest in what we now know are the really necessary ancillary products,” said Dara Lieberman, director of government relations at the Trust for America’s Health, a nonpartisan public health advocacy and research group.

The sequestration and strict budget caps ended with budget deals in 2018 and 2019 — a bipartisan rebuke to the earlier restraints. “It’s a burden off our shoulders,” Senate Appropriations Chairman Richard Shelby, R-Ala., told reporters at the time. “In a troubled world, I think that was the wrong message.”

“One of the things that happened to public health preparedness was just the result of the general budget stringency we had,” said David Reich, a consultant working on federal appropriations issues for the Center on Budget and Policy Priorities. “We’re still seeing the results of that.”

During the Trump administration, the White House has consistently proposed cutting the CDC and the HHS Office of the Assistant Secretary for Preparedness and Response, which took over stockpile management from the CDC. Congress approved more stockpile funding than Trump’s budget requested in every year of his administration, for a combined $1.93 billion instead of $1.77 billion, according to budget documents.

The White House budget request for 2021, delivered in February as officials were already warning about the dangerous new coronavirus, proposed holding the stockpile’s funding flat at $705 million and cutting resources for the office that oversees it.