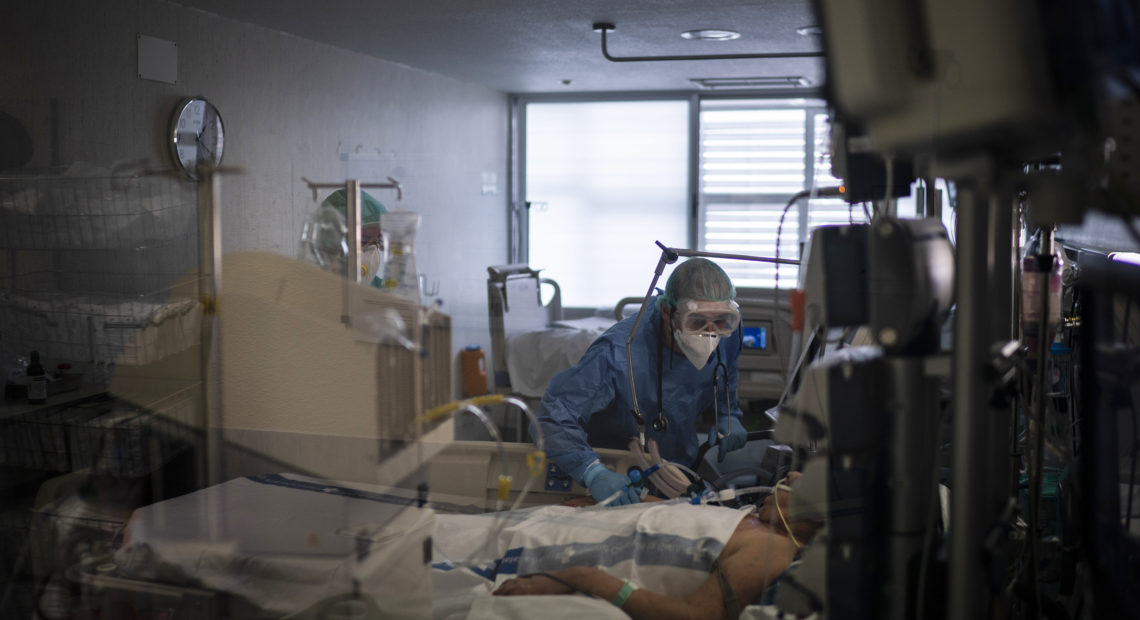 Why Some COVID-19 Patients Crash: The Body’s Immune System Might Be To Blame

It’s a strange and tragic pattern in some cases of COVID-19: The patient struggles through the first week of illness, and perhaps even begins to feel a little better.

Then suddenly they crash.

“We’ve seen some patients rapidly worsen,” says Dr. Pavan Bhatraju, an assistant professor at the University of Washington who works in the intensive care unit at Harborview Medical Center in Seattle. “They initially were just requiring a little bit of oxygen. In 24 hours they’re on a ventilator.”

A recent study by Bhatraju and others found that the patients’ lungs appeared to deteriorate quickly. The crash typically happens seven days into the disease and can occur in young, otherwise healthy victims of COVID-19. 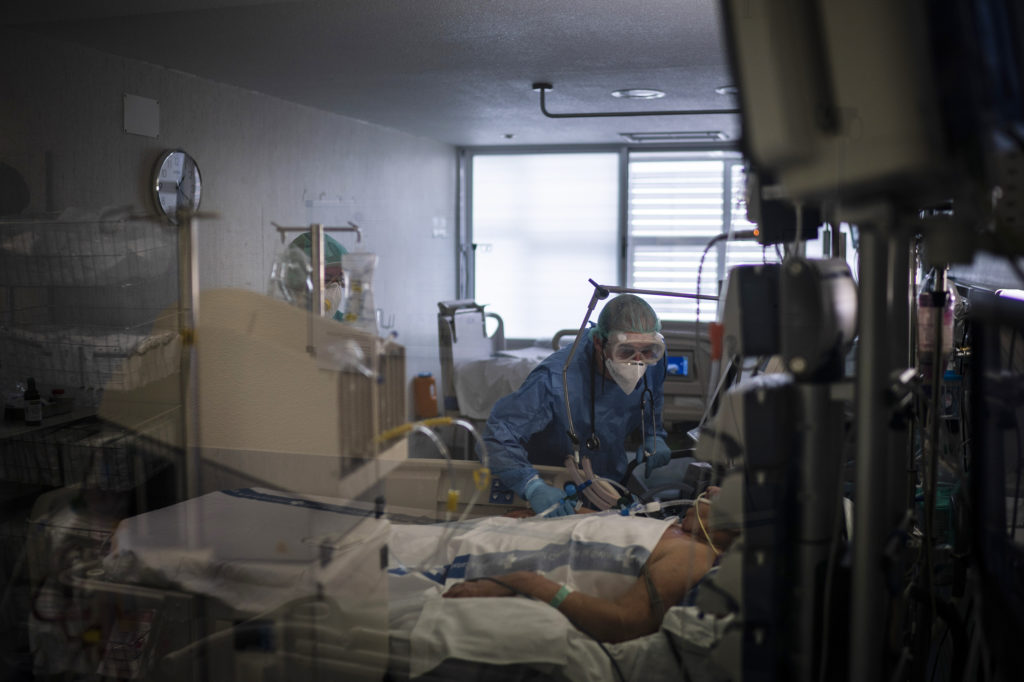 Health care workers assist a COVID-19 patient in Spain. Some evidence from Europe and China suggests an overzealous immune response may be contributing to the severe illness in some patients. CREDIT: Felipe Dana/AP

Now doctors and researchers are increasingly convinced that, in some cases at least, the cause is the body’s own immune system overreacting to the virus. The problem, known broadly as a “cytokine storm,” can happen when the immune system triggers a runaway response that causes more damage to its own cells than to the invader it’s trying to fight.

Cytokines are a wide cast of small molecules in the body that are released by certain cells to help coordinate the battle against infection.

Although there’s limited data on how the release of too many of these molecules (the cytokine storm) affects COVID-19 patients, some doctors are already treating people who have the disease with powerful anti-inflammatory drugs to try and slow or stop the process. Anecdotally, they say that the approach appears to be helping.

“The impact was dramatic,” says Dr. Daniel Griffin, chief of infectious disease for ProHEALTH Care Associates, a group of physicians that serves the New York City area. The first six patients he treated all appear to be improving, at least for now, he says. “Yesterday was a good day.”

But other researchers caution that the untested treatments carry significant risks. Suppressing the body’s immune system at the exact moment it’s trying to fight off the deadly coronavirus could have all sorts of unintended consequences, warns Dr. Tobias Hohl, the chief of infectious disease at Memorial Sloan Kettering Cancer Center in New York City. “The infection could get worse,” Hohl says.

Nevertheless, Hohl and others believe that controlling cytokine storms will turn out to be a critical way to help at least some of the sickest COVID-19 patients. And clinical trials already underway in New York and elsewhere could soon provide data about how existing drugs should be used.

“I think in a month or two we’re going to be able to help patients with COVID-19, who are dying from cytokine storms, and potentially bring the mortality rate down,” says Dr. Randy Cron, an immunologist at the University of Alabama at Birmingham.

The body’s immune system is, at the moment, the most effective weapon people have against COVID-19. The majority of patients can cure themselves of the disease simply by resting at home — enabling a small army of their own cells to attack the infection. Those cells make it harder for the virus to replicate, and help to develop antibodies that prevent it from infecting new cells. Those antibodies also likely help provide some protection against reinfection by the COVID-19 virus further down the road.

But the army of the immune system can also do collateral damage, Jessica Hamerman, an immunologist at Benaroya Research Institute in Seattle, explains. When immune cells try to fight an infection, “they make a lot of toxic molecules, and those toxic molecules can cause a lot of tissue damage.” The results are familiar to many people who’ve had the flu: Aches, fever and inflammation are actually symptoms of the immune system’s attack, not of the influenza virus itself.

Cytokine storms occur when the immune system gets stuck trying to fight a disease, Hamerman says. Cytokine molecules summon various immune cells to swoop in and attack an infection. Normally they turn on only briefly, then shut off when help arrives. But when a storm occurs, they keep sending the alarm long after it’s needed.

“Think about it like when the smoke alarm never goes off — you’re going to keep calling the firefighters over and over again and you’re going to have too many there,” Hamerman says.

Cytokine storms can be brought on by various illnesses: Some are caused by a genetic condition known as primary HLH. Bacterial infections, such as those that lead to sepsis, can also sometimes trigger a storm. And the virus that caused the 1918 flu pandemic is thought to have led to deadly cytokine storms in many of the outbreak’s otherwise young and healthy victims.

Exactly why or how COVID-19 would do the same remains unclear. But data out of China and Europe suggest that patients have elevated levels of cytokines and other immune molecules that are associated with these storms. It’s possible that the cytokine storm is being triggered because the virus is continuing to replicate, despite the immune response, says Marion Pepper, an immunologist at the University of Washington.

But it’s also possible that the immune system is out of whack and continuing to call for help after the infection has died down. “I don’t know that they know whether it’s one or the other,” Pepper says.

Regardless, Hamerman says, the storm theory could explain the second-week crash.

“It may be that you need to wait until, actually, there’s a sufficient immune response going on that can drive this cytokine storm,” she says. Some of the body’s most powerful immune cells, known as T-cells, take about a week to build up in the body. As they do, patients could start to improve, and then rapidly worsen as the cells continue to proliferate beyond the point at which they are helpful.

There are already drugs that can help reduce these storms, Hohl says. Many are used to fight diseases such as rheumatoid arthritis, where the body accidentally attacks its own cells. The drugs can block specific cytokines — effectively turning off the smoke detector — or they can more broadly blunt the immune response.

One class of drugs, in particular, shows some anecdotal evidence of helping. Known as interleukin-6 inhibitors, or IL-6 inhibitors, they block a specific cytokine associated with inflammation. Case reports out of France and China seem to show that patients are helped by the drugs, and Griffin says he’s seeing similar promise on the ground in the New York region, where he’s treating patients with both steroids and IL-6 inhibitors.

“It looks like if they get the interleukin-6 [drug] right as this cytokine storm is ramping up, the impact was dramatic,” he says. In one case, a woman who was close to being put onto a ventilator regained the ability to breath on her own in a matter of hours. Another patient spent only a brief stint on a ventilator, as opposed to the weeks typically required. As of Tuesday, he says he is treating dozens of patients with steroids and IL-6 inhibiting drugs.

“Now I’m going to watch over the next few days,” Griffin says. “Is it durable? Will these people continue to do well?”

But Hohl says that case reports and anecdotal evidence are not enough to recommend these drugs for everyone. For one thing, he says, they have virtually no track record being used while a patient is battling an infection.

“These drugs are phenomenally effective for rheumatologic conditions,” he says. But blocking the immune system’s communications network as the coronavirus mounts an attack could have unintended consequences.

Other drugs that act even more broadly in the body, such as corticosteroids, could also raise the risk of a secondary infection, he warns. Bacterial or fungal diseases could end up making the patient sicker than COVID-19 itself.

Hamerman adds that cytokine storms are almost certainly not the only way COVID-19 kills its victims.

“The people who die from COVID-19 are probably dying from many different causes,” she says. More data is needed to determine how often a cytokine storm is the cause of a patient’s sudden illness, and when the drugs should be administered.

“It’s not going to help the 85-year-old with hypertension and diabetes,” Cron agrees. “But for those who don’t have chronic underlying diseases, and even for some of those who do, it will — potentially — help them.”

Clinical trials are now underway to test IL-6 inhibitors and other drugs against cytokine storms. Regeneron, one of the companies that makes IL-6 drugs, says that they are conducting clinical trials in the U.S. and Europe.

“We expect we may be able to share initial results of the Phase 2 portion of the U.S. trial by the end of April,” Sarah Cornhill, a company spokesperson, tells NPR in an email. Roche, which also produces another IL-6 inhibitor, is in Phase III trials. Both companies say that they are increasing production of IL-6 inhibitors to cope with anticipated demand for the drug.

Hohl say clinical trials have not yet opened at Memorial Sloan Kettering. In the meantime, he says, he is already giving anti-inflammatory drugs to patients on a “case-by-case” basis. He is hopeful that, within a matter of months, researchers will know far more about when and how these drugs might be useful in treating some COVID-19 patients.

“We’re using these drugs, but we’re driving blind,” he says. “What I hope is that a landscape will emerge, and we’ll see where the road is.”