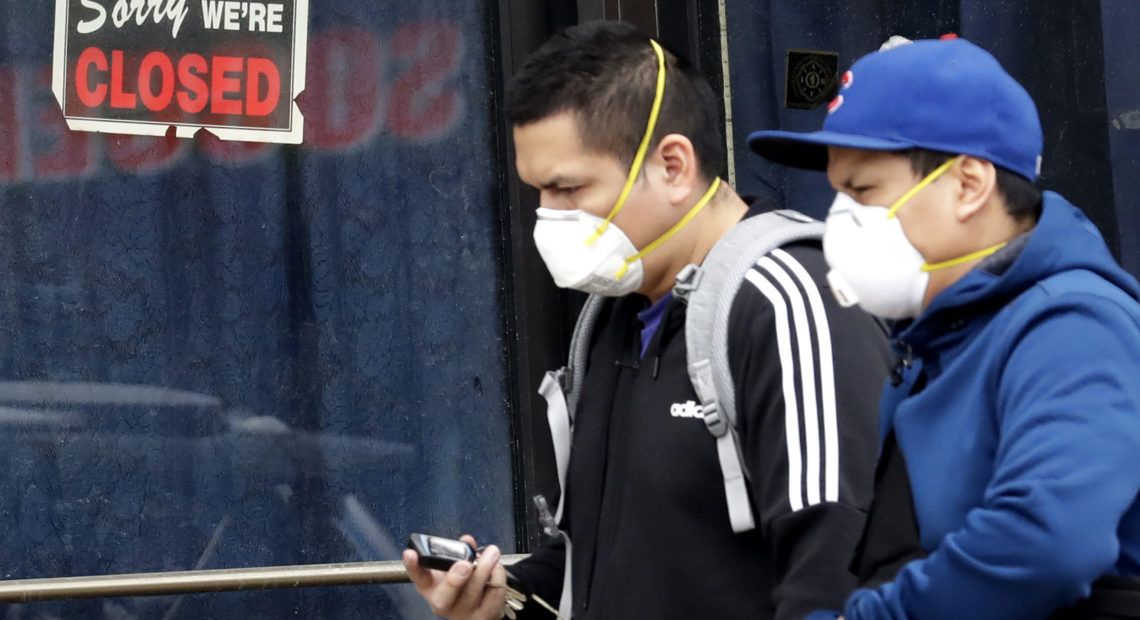 ‘Tip Of The Iceberg’: Economy Shrinks At 4.8% Pace, But Worst Is Yet To Come

The coronavirus pandemic is likely to trigger the sharpest recession in the United States since the Great Depression. An early signal of that came Wednesday, when the Commerce Department said the economy shrank at a 4.8% annual rate in the first three months of the year — the first quarterly contraction since 2014 and the largest since the Great Recession. 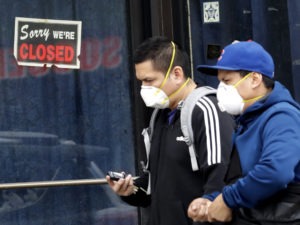 The U.S. economy shrank in the first quarter, as the coronavirus lockdown began. The April-to-June quarter is expected to be worse. CREDIT: Nam Y. Huh/AP

For the first 2 1/2 of those months, the economy was chugging along at a steady, if not spectacular pace. But the plug was suddenly pulled in mid-March — when bars, restaurants and retail shops were abruptly closed and tens of millions of Americans were ordered to stay home in an effort to slow the spread of the deadly disease.

The Commerce Department said the decline in gross domestic product was “in part, due to the response to the spread of COVID-19, as governments issued ‘stay-at-home’ orders in March. This led to rapid changes in demand, as businesses and schools switched to remote work or canceled operations, and consumers canceled, restricted, or redirected their spending.”

More than 26 million people suddenly out of work have filed unemployment claims in recent weeks. 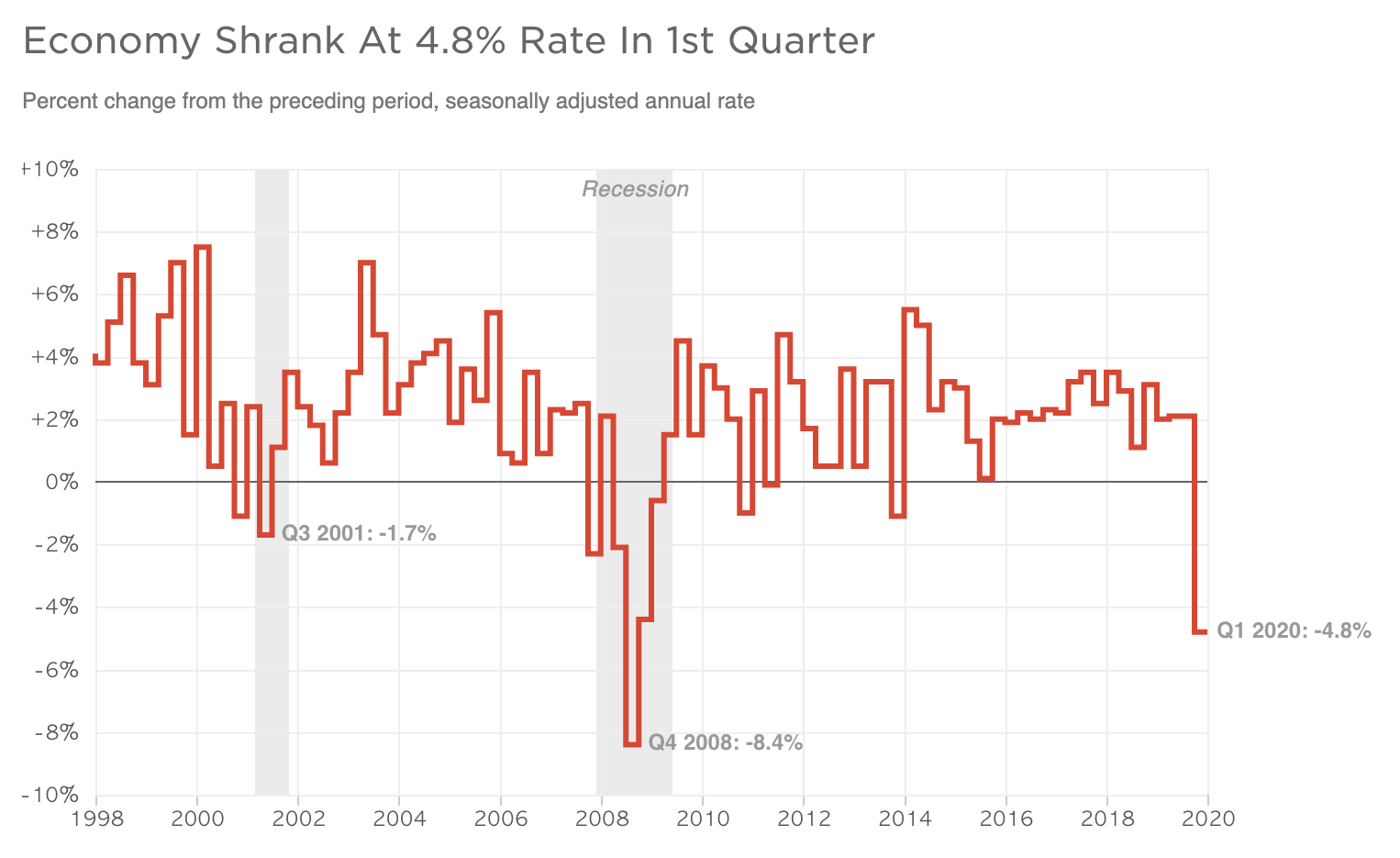 Half of all Americans say they or someone in their household has either lost hours or a job because of the coronavirus, according to a new NPR/PBS NewsHour/Marist poll.

“Prior to the coronavirus shock, the economy was doing relatively well,” said Gregory Daco, chief U.S. economist for Oxford Economics. “The shock that we experienced in the second half of March actually has led to a sudden stop in spending on a lot of services and even spending on some goods.”

Analysts say even though that shock affected only the last few weeks of the quarter, it was more than enough to erase the gains of the previous 2 1/2 months.

Daco said the first-quarter decline is “only the tip of the iceberg.”

The bulk of the pandemic’s economic impact will be felt in the current quarter — April through June. By the end of June, Daco estimates the economy will be 12% smaller than it was at the beginning of the year.

“To put that into perspective, that [drop] would be three times as large as what we experienced in the global financial crisis,” Daco said. It would be comparable to what the economy experienced at the end of World War II, when factories abruptly stopped churning out tanks and warplanes but had not yet shifted to making civilian goods.

Other forecasters also expect to see a sharp reversal in economic growth.

“Whenever you have the entire country changing behavior at one time in a way that reduces spending, it’s certainly enough to wipe out any of the gains that we saw earlier in the year,” said Ben Herzon, an economist at IHS Markit.

He noted that since the coronavirus took hold, air travel and restaurant reservations have all but completely evaporated.

“For now, we’re expecting the economy to more or less stabilize in the third quarter and then begin to recover in the fourth quarter,” Herzon said. But he acknowledged there’s considerable uncertainty in that outlook.

“That all depends on how quickly new infections can be driven down and how quickly consumers and businesses will feel confident enough to begin spending,” he said.

Daco also expects the economic recovery may be slow and uneven.

“We don’t expect this rebounding activity to be akin to turning on a light switch but instead more like a dimmer, where gradually, we start to see more activity through the second half of 2020 and into 2021,” he said. “We really expect the acceleration in terms of rebounding activity to really take place more in the fall and into the winter, rather than in the summer.”

Any recovery could be further hampered by widespread business failures or an acceleration of the pandemic that requires a second round of lockdown orders.

Both Congress and the Federal Reserve have tried to keep businesses afloat with a flurry of emergency lending programs. Fed Chairman Jerome Powell is expected to discuss those measures Wednesday afternoon at the conclusion of the central bank’s two-day meeting.

“I think that Chair Powell is going to highlight the fact that there is tremendous uncertainty,” Daco said. Much will depend on whether people “respect the lockdown and abide by the rules, which would permit a greater control of … the health crisis and perhaps a stronger rebound from this coronavirus shock.”