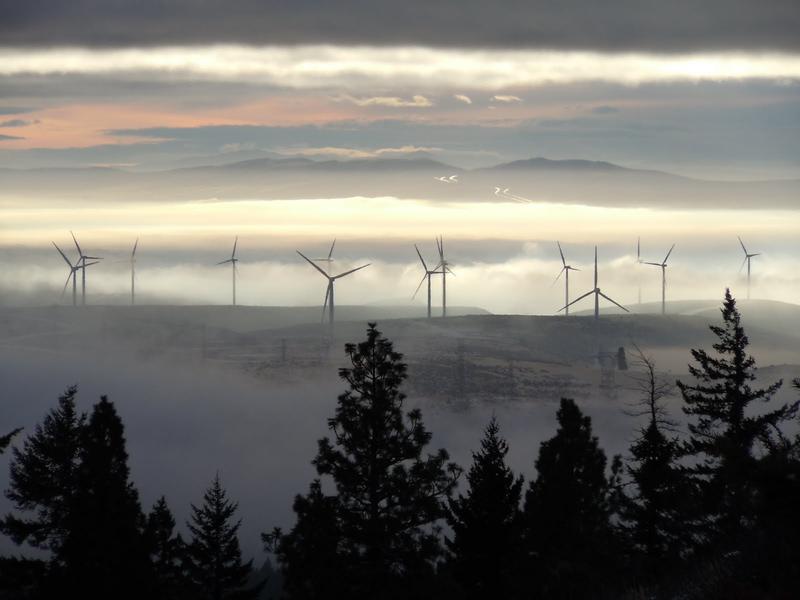 Rural Washington Counties Seize Chance To Accelerate Reopening As Others Say ‘What About Us?’

Given the opportunity to accelerate the restart of shuttered businesses and social activities, six counties in central and eastern Washington wasted no time this week in submitting the necessary paperwork to the state government. Kittitas, Garfield, Columbia, Ferry, Stevens and Pend Oreille County officials hope to hear an answer back from the Washington State Secretary of Health before the end of this week. Lincoln County joined the queue on Wednesday.

A green light would allow barbershops, salons, professional services and Main Street retail stores to reopen. Sit-down service in restaurants could resume at up to 50 percent of normal dining capacity. Small social gatherings of no more than five people from outside a person’s household would be OK.

Last Friday, Gov. Jay Inslee announced that a group of 10 smaller counties could jump ahead one step in the four-phase reopening process the Inslee administration launched this week. None of the selected counties has had a new COVID-19 case for at least three weeks. To move early to what is formally called “Phase 2,” a county has to attest that its health care system has the capability to detect an uptick in infections and handle a local outbreak.

“We know that people are anxious,” said Kittitas County Health Officer Dr. Mark Larson in a press statement Wednesday.  “We do have a plan in place and we will not be allowed by the state to move forward if we are not able to protect the health of residents of Kittitas County.”

The rest of the state will have to wait until June 1 or so to experience a relaxation of the stay-at-home orders and business restrictions. At least five or six other counties with low rates of coronavirus infection are now seeking to join the early reopening group.

“We are no longer in a single statewide system, and we have decided that is OK right now,” Gov. Inslee’s Chief of Staff David Postman told reporters Monday. “We’ve been trying our best to listen to people – listen to local leaders, businesspeople, school superintendents – and one of the things we heard was, ‘What about a regional approach? Why is it one size fits all?'”

In mid-March, Inslee said a county-by-county approach to the epidemic would produce undesired inconsistency, but the administration’s thinking has now changed. Postman said Garfield County with no COVID-19 cases clearly presents different conditions than bigger, dense counties with a lot of cases and should be allowed to move forward at a more rapid pace.

“We can ramp back down if we need to,” Postman added.

A few of the rural counties given the option to accelerate reopening are moving more cautiously. Grays Harbor County leaders discussed the pros and cons of getting approval from the state at a Board of Commissioners meeting Tuesday.

Commissioner Randy Ross said he had some concerns about provoking a resurgence of the virus. But he told his fellow commissioners that he was also swayed by hearing from many closed businesses that are eager to restart.

“When I’m out to Safeway or look at what is happening at Walmart or Home Depot and I see crowds of people, I’m not sure why our other retailers can’t have the same situation where they provide social distancing and proper protective gear,” Ross said. 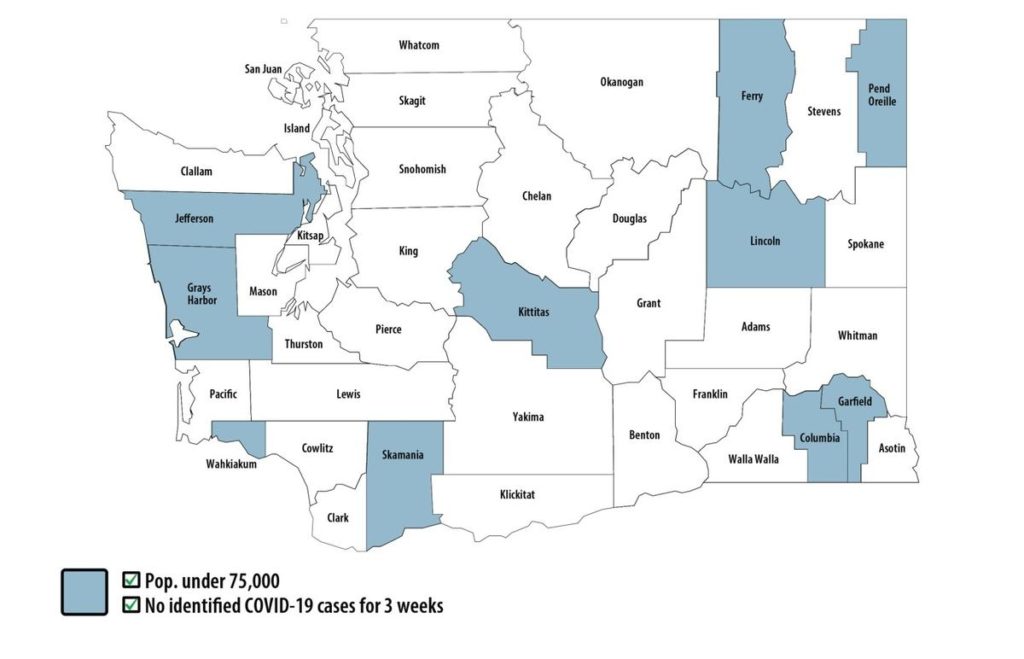 Map of the ten counties allowed to apply for early relaxation of COVID-19 restrictions. CREDIT: Office of Gov. Jay Inslee

The Grays Harbor Public Health Department is still assessing if the coastal county has adequate testing supplies, reliable resupply of personal protective equipment (PPE) and sufficient trained staff to rapidly investigate and isolate patients who could be infected in a potential new outbreak. Up to now, Grays Harbor County has recorded just 12 COVID-19 cases. The most recent was identified on April 12.

Jefferson County on the Olympic Peninsula, also deemed eligible to seek early reopening, is proceeding deliberately as well. The county health officer wrote in a situation report posted earlier this week that a seven-member committee would evaluate the menu of business and social activities that could be reopened in accelerated fashion and recommend whether to seek permission to do all of them or just a selection.

Wahkiakum and Skamania counties in southwest Washington are the other jurisdictions in the first group eligible to seek early reopening. Oregon Public Broadcasting reported that leaders in both places are eager to take advantage, but the timeline for getting all the necessary local approvals to proceed was uncertain.

As COVID-19 restrictions get patchy statewide, one thing remains universal. Non-essential travel far from home is still a violation of the governor’s stay-at-home order. So city dwellers should forget about going on a road trip for a haircut and dinner out.

“This whole system is based on people staying as close to home as you can,” Postman said.

The first county to submit its application to reopen early illustrates the risk posed by travel. Kittitas County borders King County, which was the nation’s initial epicenter for the coronavirus epidemic. Kittitas also borders hard-hit Yakima County, which currently has the highest rate of infection on the West Coast.

Lincoln, Columbia and Garfield counties are home to about 17,000 people – fewer than Seattle’s Wallingford neighborhood. Between them, the three eastern Washington farming counties have had three coronavirus cases.

Garfield is the least densely populated county in the state, and as of May 6, it’s the only one without a confirmed coronavirus case.

“We have a unique community over there. I feel like we do social distancing, said Martha Lanman, the public health administrator for Columbia and Garfield counties. “The population isn’t a lot. … Our hairdressers are one-person shops, so the social distancing is not the same as in the big city,” Lanman said.

“At this point in time, we haven’t had a case since April 8, so the prevalence of disease in Lincoln County is very small, if we – to be honest with you – if we have it here at all,” Dzedy said.

Lanman and Dzedy have signed off on the reopening in their counties. So have the counties’ boards of health and commissioners. The four hospitals in the three counties have said they can handle any surge if COVID-19 comes to town.

The state health department says it will work through the variance requests quickly, but Dzedy warned that it may take longer than the anticipated three-day turnaround.

Other Counties Want To Join

Clallam County legislators sent Inslee a letter Tuesday asking that their county be allowed to join its Olympic Peninsula neighbors in seeking an early reopening. Clallam County has recorded 18 positive tests of COVID-19 with four of those cases appearing in the last three weeks.

The trio of legislators that represent Whitman County on the opposite side of the state followed up with a similar letter to Inslee on Tuesday that noted the home county of Washington State University has half as many cases (14) as Jefferson County (28), which made the list. Like other excluded counties, Whitman has not achieved three consecutive weeks without a new case.

On Tuesday, Spokane Mayor Nadine Woodward vented in a string of unhappy tweets after a phone call in which Spokane County leaders pleaded with Inslee for permission to jump ahead. Woodward said the governor set an unrealistically high bar for a county with 500,000+ people by insisting on no new cases in a county for a three week period to qualify for accelerated reopening.

Washington State Department of Commerce Director Lisa Brown responded with her own tweet Wednesday. She said the governor’s office and state health department were “working to develop standards for larger counties to reopen likely different than initial standard for the least populated counties.”

Stevens County and San Juan County were not on the governor’s initial list either. Stevens County submitted its application for a variance Tuesday in conjunction with its eligible northeastern Washington neighbors, who all fall under the Northeast Tri County Health District. Stevens County will cross the threshold of three weeks with no new cases on Monday, provided no resident tests positive between now and then.

The San Juan County Council voted Tuesday to direct its staff to produce a custom-tailored reopening plan which could represent what one councilmember called a “baby step” ahead of the statewide pace. 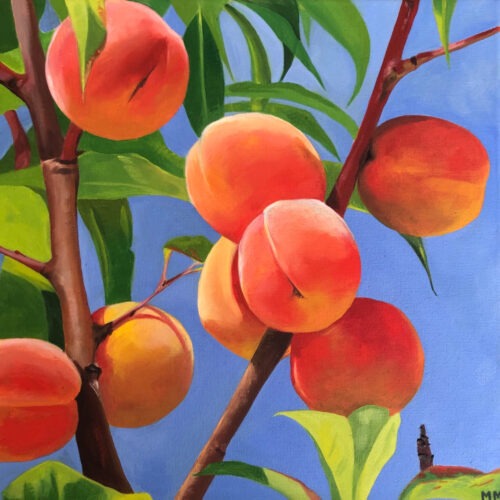