Mother’s Day at Palouse Falls State Park in southeastern Washington looked like a scene out of the movie Mad Max.

Massive RVs sped down the gravel washboard of Palouse Falls Road. They kicked up drifts of dust. In all, Palouse Falls, with its modest parking lot and viewing area saw hundreds and hundreds of visitors last Saturday and Sunday.

Similarly, on Oregon’s north coast saw so many out of town visitors last weekend they had to be told to go home. Hundreds were enjoying the sun before officials swept through.

Northwest state officials are struggling to contain crowds in parks in the time of coronavirus. Washington opened most parks on May 5, Oregon on May 6. Now, the states are trying to fine tune their response for future sunny-day crowds.

“I think the public themselves have probably learned some lessons after they got out and about a little bit this week,” says Audra Sims, who manages Palouse Falls and other Washington parks. “The agencies that are providing public spaces are learning some things from going through this week. And so I think as we go into week two, and then week three we just need to refine our approaches.”

Most Washington state parks are now open, with exceptions along the coast and popular hiking spots in the Columbia River Gorge.

Sims says some parks were sleepy last weekend, so upcoming changes to policies will vary by park.

“It really does fluctuate depending on what the park is, what it is offering, what’s beckoning people to come to visit. [That] really shaped the attendance that we saw throughout the entire state,” Sims says.

According to Sims, two things have also increased visitation at Palouse Falls: social media sharing, and the park’s designation as the official state waterfall. Managing the waterfall overlook has always been challenging in the spring, but it’s extra hard in this time of managing crowds with coronavirus safety measures in mind.

“We appreciate the cooperation we’ve gotten from visitors, and we hope that will continue,” Havel says. “We’ve seen some people get upset at each other. We just need people to chill a bit and maybe come back when it’s less crowded.” 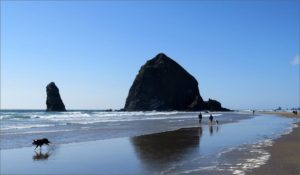 Haystack Rock at Cannon Beach is among the most photogenic attractions of the Oregon coast. The town, beach and nearby Ecola State Park are big tourist draws. CREDIT: Tom Banse / NW News Network

Havel says efforts to open up parks are largely hampered by money since the parks department isn’t fully state funded. It largely depends on user fees and the Oregon lottery, and those funds have been diminished with park closures and fewer sales of lottery tickets. Where usually the agency would hire upward of 400 seasonal employees for the upcoming summer, it’s only hired about 70 so far.

“People are expecting some version of service at a park when they go visit and to get back to camping eventually,” he says. “But that’s all really difficult when you don’t know what the revenue looks like.”

Harvel says several more Oregon parks are about to open. The southern coastal areas are expected to open within the next week, while the central and northern coast will be slower to open. It will largely depend on when the communities near those beaches deem they are ready.

There are two other popular spots opening soon: Smith Rock State Park near Bend and beaches in Seaside.