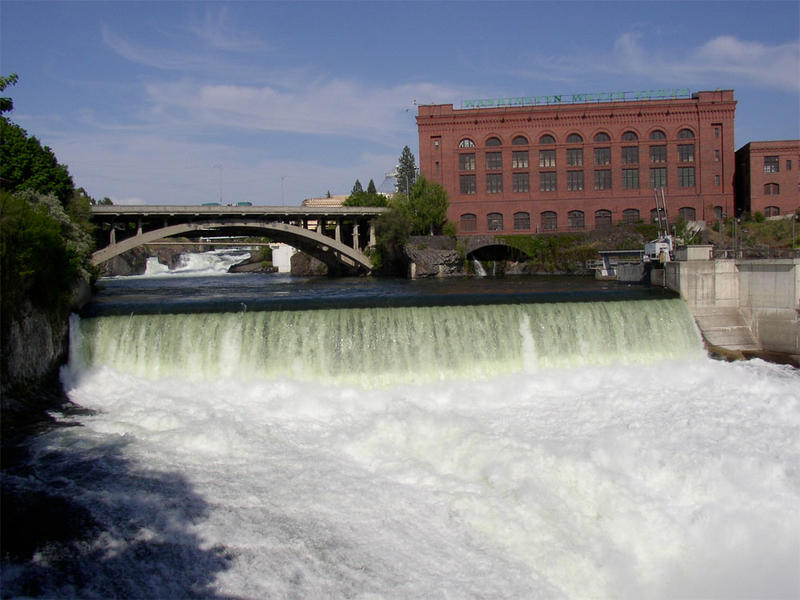 The county-by-county reopening of Washington state is picking up steam. The state Secretary of Health on Friday approved four additional places where closed businesses can now restart immediately if they have safety plans in place. At least a half-dozen more counties — backed by antsy business communities — are queuing up close behind.

Spokane, Adams, Grays Harbor and Lewis counties are the latest to move to Phase 2 in Washington’s four-phased approach to loosening coronavirus restrictions. Phase 2 allows restaurants to reopen at 50% capacity with a table size limit of five diners. Hair and nail salons can reopen. In-store retail at smaller shops, manufacturing and new construction are allowed, and small groups of friends can get together again.

“Spokane is the largest community to move forward so more businesses can open & people can get back to work!” tweeted an elated Spokane Mayor Nadine Woodward on Friday. “Stay healthy and respect one another!” 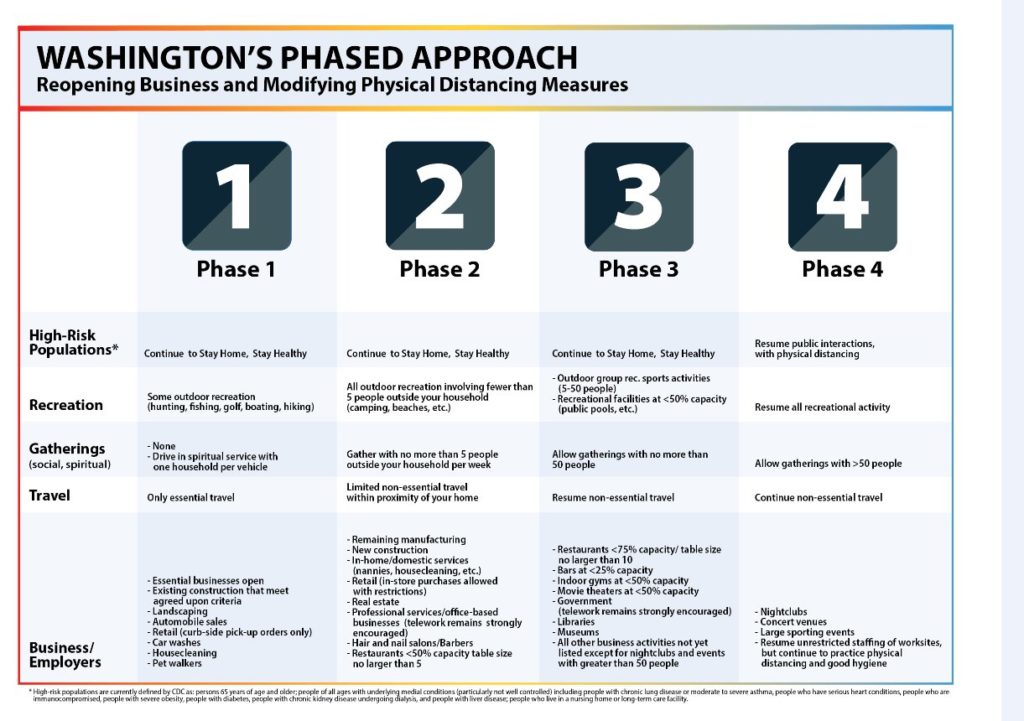 Washington state’s four-phase reopening plan as outlined by Gov. Jay Inslee on May 1, 2020.

Elsewhere in Washington, officials from counties large and small scrambled to assemble the documentation and letters of support needed to convince the state Department of Health that they too have the testing capability and treatment, isolation and contact tracing capacity to handle any potential new outbreaks of COVID-19, the disease caused by the novel coronavirus.

At this juncture, 25 of Washington’s 39 counties representing about one-third of the state’s population are either approved or eligible for early reopening. Notably excluded are the Seattle metro area and some populous central Washington counties that have recently experienced major COVID-19 outbreaks in meat and food processing plants.

“We are making good progress as we continue to open Washington in segments,” said Democratic Gov. Jay Inslee in a statement Friday.

Inslee has previously discussed letting the rest of the state move to the next phase of reopening around June 1, but he reiterated Friday that the date could change depending on the trend in infection rates then.

“To be clear: this does not mean that we will be able to open every county in the state on June 1,” Inslee added. “Counties that continue to have large numbers of infections are not in a position to open up stores, restaurants and services safely.”

Bright and early on Friday in Olympia, the Thurston County Board of Health met virtually and then voted unanimously to submit its application to the state to move to Phase 2 sooner.

“This is the first step in that recovery,” said Thurston County Commissioner John Hutchings. “It doesn’t mean… ‘Boy, everything’s just fine now, peachy keen.’ There are still concerns and we still need to be wise. But it is a momentous day nonetheless.”

Neighboring Mason County said in a public update Friday that it is finalizing its plan and documentation to submit to the state to accelerate the reopening of shuttered businesses and social activities.

In Ephrata, Grant County Commissioners held a special meeting to bless their health district’s application to the state. The health district administrator said in an update posted later on Friday that she submitted a 30-page application with the hope that it could be reviewed by the Secretary of Health over the weekend and quickly approved.

Kittitas County in central Washington sent out a news release to report that its nearly three-week old application to move to Phase 2 would be reconsidered beginning Tuesday, May 26. Kittitas County was the very first to seize the option to jump ahead of the rest of the state. But its paperwork was paused when 49 workers at the Twin City Foods plant in Ellensburg tested positive for the virus.

Jefferson County Commissioners voted unanimously on Friday to apply for a partial Phase 2 reopening. Unlike other counties, the county health officer and health board excluded certain activities that could otherwise restart. Notably, camping and sit-down service in restaurants would not be allowed until neighboring counties do so too. The intent is to discourage recreational travel from outside the county, which is a cause of anxiety among some locals.

On May 1, Gov. Inslee announced the first group of counties given the option to jump ahead one step in the reopening process. The initial criteria for selection were a population under 75,000 and three consecutive weeks without a new COVID-19 case.

This past week, Inslee and state Secretary of Health John Wiesman broadened the eligibility criteria under pressure from larger counties that complained the three-weeks virus free threshold set an unrealistically high bar. Now, the criteria to advance is to have fewer than 10 new cases per 100,000 residents over a 14 day span.

Some counties deemed eligible are proceeding cautiously. Clallam County has scheduled a Board of Health discussion next Wednesday, May 27. If officials later decide to apply for an accelerated reopening, by the time it is reviewed at the state level, all of Washington may already be at Phase 2.

Reopening is also a hot button issue in Kitsap County where a recent positive case of a worker at the Washington State Veterans Home in Port Orchard raised an alarm. The Kitsap Public Health Board plans to meet next Wednesday as well to discuss and take public testimony on the best course forward.

San Juan County leaders spent more than two weeks debating whether or not to seek an accelerated reopening. On Friday, the county health board and council finally voted to submit an application this weekend.

Before the unanimous vote, council members heard a range of impassioned testimony from both business owners and retirees.

Some residents voiced worries that reopening too soon would endanger their health. One man argued that opening restaurants would just lead to increased spread of the virus. There were recurrent pleas to decision makers not to choose money over health.

Owners of closed businesses countered they were near the breaking point, which would bring broad layoffs unless the screws were loosened soon.

“Today we were notified by the Washington state Department of Health that Spokane County was granted variance to move into phase two of the governor’s Safe Start plan to reopen Washington,” said Regional Health District Administrator Amelia Clark.

Phase 2 allows groups up to five who don’t live under the same roof to meet for social purposes or to worship. Restaurants and bars can reopen with proper physical distancing, up to 50% of capacity. No seating at the bar allowed. Businesses can reopen if their sectors have specific guidelines from the state. Retail can resume. People in domestic jobs can work in others’ houses. Real estate and professional services companies can reopen, as can hair and nail salons, barbershops, and pet groomers.

“I couldn’t be happier with the timing of all of this,” Spokane Mayor Nadine Woodward said. “Spokane County is the biggest community in the state to now move forward. So thank you for being Inland Strong.”

She says the announcement ensures Spokane is the largest community in the state to be allowed to reopen to a greater extent than much of the rest of Washington. She says the county will monitor its progress and look ahead to the steps needed to move to phase three, which she said will be at least three weeks away.

“This decision to enter into phase two will not only help us to retain businesses here in Spokane County, but also to start the process of attracting new businesses back to this region,” County Commissioner Al French said.

The state granted the move despite 31 new confirmed cases of COVID-19 in the last two days. Clark said the health district will watch those cases and report back to the state about the circumstances.

Woodward says the announcement ensures Spokane is the largest community in the state to be allowed to reopen to a greater extent than much of the rest of Washington. She says the county will monitor its progress and look ahead to the steps needed to move to phase three, which she said will be at least three weeks away.

“I couldn’t be happier with the timing of all of this,” Woodward said. “Spokane County is the biggest community in the state to now move forward. So thank you for being Inland Strong. We must continue to be Inland Strong and do everything we can to protect ourselves, our neighbors and our community.”

Tom Banse is a regional correspondent based in Olympia for the public media Northwest News Network. Doug Nadvornick is news and program director for Spokane Public Radio.