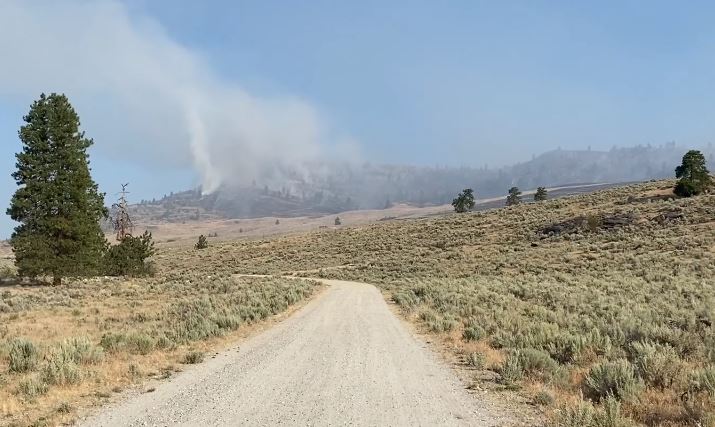 A rapidly growing fire has prompted evacuations in Okanogan County. What’s being dubbed the Anglin Fire is burning in timber near Tonasket along state Highway 20.

Level 3 –Get Out Now – evacuation notices were issued Monday evening to people in the Cayuse and Island Mountain areas east of Tonasket. At least one home and two outbuildings have burned so far. Aircraft were diverted from another fire burning nearby in Okanogan County. (See all area evacuation notices here.)

A Type 3 team from the Northeast Washington Interagency Incident Management team took over fire management Tuesday, including for the nearby Green Mountain Fire.

Maurice Goodall with Okanogan County Emergency Management says both fires were human-caused. He said people need to be especially careful to not ignite fires as conditions continue to be dry and breezy this week, with potential dry thunderstorms.

“The conditions are just right. They’re going to burn. It’s dry out there, and if we have the winds, it’s going to go fast,” he said.

The Red Cross is sheltering people who have been evacuated. The Okanogan County Fairgrounds and Tonasket rodeo grounds are taking in pets and livestock.

The Anglin Fire is just one of several large and fast-moving wildfires that have started in recent days.

The ban on outdoor burning, the use of charcoal briquettes, and prescribed burns covers all 12 million acres of public and private forestland under protection of the state Department of Natural Resources. But recreational camp fires in approved fire pits of designated campgrounds are still allowed. (See more wildfire resources from the Washington state DNR.)

Franz says the announcement comes after a spike in wildfires over the weekend, most of which were human caused.

“That’s going to create the critical fire conditions: windy, dry conditions after a lightning event on Thursday,” Nisbet said, noting that so far this year, weather conditions have been lucky. It’s been slow to dry out and slow to get fires started.

Washington Department of Natural Resources meteorologists say vegetation is at its driest point of the season. That means new fires could be challenging because the landscape is primed and ready to burn.