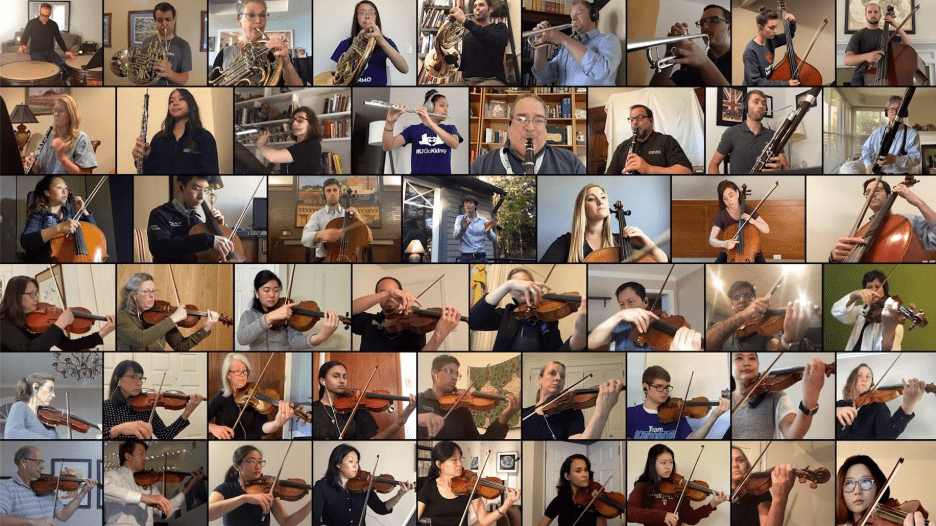 When cases of the coronavirus spiked in March, doctors and nurses across the country found themselves overwhelmed with work. The shutdown also took away an important creative outlet for a special breed of medical professional: classical musicians. That’s why John Masko, a symphony conductor in Boston, founded the National Virtual Medical Orchestra, giving those in the medical field a chance to perform and connect with each other.

“I kept hearing from musician after musician from our ensemble [about] how much they wish they were playing,” Masko says.

Medical orchestras are not a new phenomenon. Masko says that the concept has exploded over the last couple decades, but that the sphere’s fast growth had led to fragmentation and that few ensembles knew about each other or were in close contact. That’s changed now with everyone forced online.

“I got a lot of emails after we posted our first video,” says violinist Dr. Erica Hardy. She says the orchestra’s virtual performances are a way to give back to the community.
Screenshot by NPR

“Medical musicians around the country are discovering each other and many are reconnecting with old friends,” Masko says. “We’ve had that happen through our ensemble already.”

Dr. Erica Hardy — an infectious disease specialist in Providence, R.I. — plays violin in the orchestra. She says that health care workers turning to music-making shouldn’t be an incongruous idea.

“Many of us have been musicians longer than we’ve been doctors or scientists or nurses,” she says. “I started playing when I was 4 years old.”

Hardy says that the positive impact of playing music for them is two-fold.

“It gives us an outlet. We use a different part of our brain; it’s a time to do something else and take our minds off medicine,” she says, and that it also helps having a hobby with lower stakes. “We try to play all the notes, but if we hit the wrong one, it’s not life or death.”

Playing in the National Virtual Medical Orchestra might not be as complex as performing surgery, but it’s still quite a process. Conductor John Masko says the logistics behind coordinating a live, virtual rehearsal can be challenging.

“I think for most of us who’ve had the experience of singing “Happy Birthday” for someone over Zoom in a group, you see that that’s not really something that’s practical in this medium,” he says. “What we actually do is we’ve worked with a pair of absolutely fantastic producers to do these performances, which is vital.”

The producers help create a track that the orchestra’s musicians can listen along to as they play, which helps the ensemble match tempo and interpretive style. Then, they submit recordings of themselves for Masko to listen to and give feedback on.

“The result of that,” he says, “is you end up with a unified performance across the ensemble.”

And although the National Virtual Medical Orchestra is filling the hole of live performance in these musicians’ lives for now, John Masko would love to meet and conduct the ensemble together one day.

“Our hope is that, even if we’re not producing virtual performances because we’re able to be back together in person,” he says, “that the unifying effect of this ensemble can continue on in some way and be a headquarters, be a base of support for the medical orchestra movement around the country.”