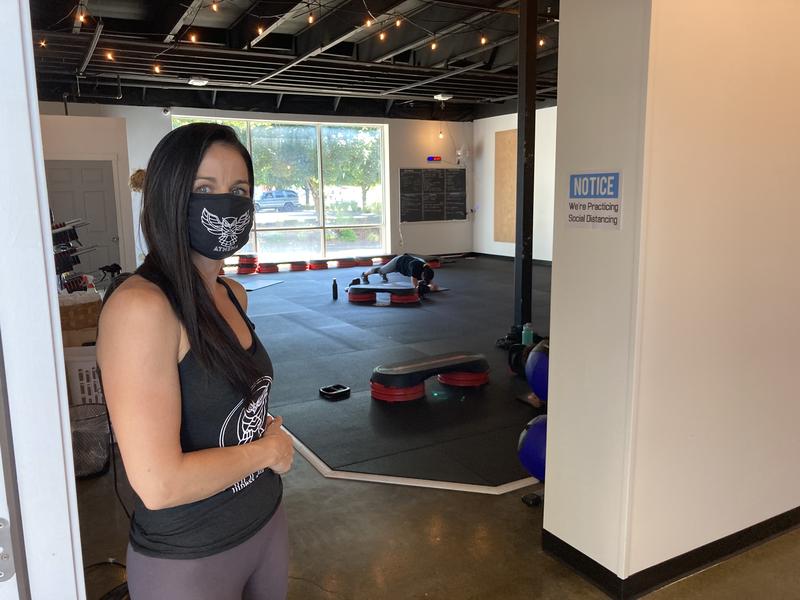 She Followed Rules And Took COVID Seriously. But Now An Olympia Gym Owner Is ‘Freaking Pissed’

And then the coronavirus pandemic struck.

“I think it’s like the worst timing ever,” Krueger said in a recent interview.

Six weeks after opening, Athena closed its doors in response to Gov. Jay Inslee’s statewide stay home order. Krueger and Sather pivoted to daily workouts offered online. Even so, they lost all but five of their monthly, dues-paying members.

In early June, as Thurston County moved into Phase 2 of Inslee’s reopening plan, Athena also began to reopen. But Krueger said they took it slowly – keeping classes even smaller than was allowed and avoiding the use of shared equipment.

“We fully recognize that this is a real and serious thing and we want to make people feel safe,” Krueger said.

It wasn’t easy and it wasn’t ideal, but Krueger said their business was getting by. But then earlier this month something happened that once again threatened to put them out of business.

On August 3, Inslee announced new rules for indoor fitness studios and gyms that nearly tripled the required spacing between class participants from six feet to 17 feet. Krueger expressed her frustration in a four-minute video she posted to Instagram.

“I have to say that I am freaking pissed,” she said in the video. “We’re unable to pay our bills with these mandates; that is the reality.”

The new guidelines benefited larger facilities because it removed a previous proposed cap on class sizes. But for a small facility like Athena, the new 17-foot rule meant going backwards and reducing classes to just six people. They also had to close their sauna and salt room.

“I feel like we’re just being unfairly punished and then the people at the top just continue to get richer, which is the very, very broken system that we are in and I know many are feeling this,” Krueger said.

The new rules came in response to a steady rise in COVID cases in Washington. Beginning in late June, Inslee started to slow his unlocking of the state. Then in late July he ordered actual rollbacks aimed at activities and industries deemed higher risk for COVID-19 exposure. That included indoor fitness.

“We know every prohibition is a challenge to a business and challenge to individuals,” Inslee said during a July 23 news conference. “But we know that we do not have an option here. If we fail to act, we will expose thousands of more people to this pandemic’s ravages.”

Krueger says she could live with the new policy Inslee outlined in July. But others in her industry pushed back on the class size cap. In early August, Inslee released the revised rules that included the 17-foot rule. That’s what prompted Krueger to record her video and post it to social media.

“I’m telling you right now that gyms like ours are not the problem,” she insisted in the video.

As Krueger sees it, her business is paying the price for reckless behavior by others who aren’t wearing masks and aren’t keeping a distance. She points to the crowds she saw recently at Lake Cushman in Mason County.

“That is why it’s spreading,” she said.

In response, Inslee’s office says the risk of COVID transmission outdoors versus indoors is fundamentally different. A spokesperson also said the governor’s office remains in talks with industry representatives, but that it’s too early to say if that will result in changes to the rules.

Krueger hopes the rules for small fitness gyms like hers will be revisited. She recently signed onto a petition asking for a return to the six foot rule combined with a limit on overall capacity. But the future of Athena Fitness is uncertain. Krueger is hoping to avoid the grim fate that’s befallen thousands of other businesses.

Between March 1 and July 10, more than 2,000 Washington businesses permanently closed, according to tracking by Yelp.

Nationally, minority- and women-owned businesses (MWBEs) are especially vulnerable. In May, the Washington Post reported a 40 percent drop in the number of African American business owners.

An April report by the Brookings Institution warned that “the COVID-19 recession has the potential to be disproportionately devastating to MWBEs.”

And a May report by McKinsey & Company noted that minority-owned businesses are disproportionately in sectors that are most affected by COVID-19, including accommodation and food service, retail and healthcare and social assistance.

“Minority businesses, women-owned businesses will feel this heavier … up to twice as much,” predicted William Bradford, an expert in business economics who’s a former dean of the Foster School of Business at the University of Washington.

Bradford, who’s been inducted into the Minority Business Hall of Fame, said another contributing factor is that these businesses are not able to obtain government relief, like the federal Paycheck Protection Program loans, at the same rate as white-owned businesses.

For now, Krueger and her business partner are keeping Athena going. They’re not paying themselves, but they’ve managed to pay their rent and other expenses. A Go Fund Me effort covered one month’s rent. They’ve also received some small grants and recently they learned they’ve qualified for a small loan from the federal government. But Krueger doesn’t know if they can survive much longer.

“I think we have about four months if things don’t get any worse, but not any better and after that we’d have to call it,” Krueger said.