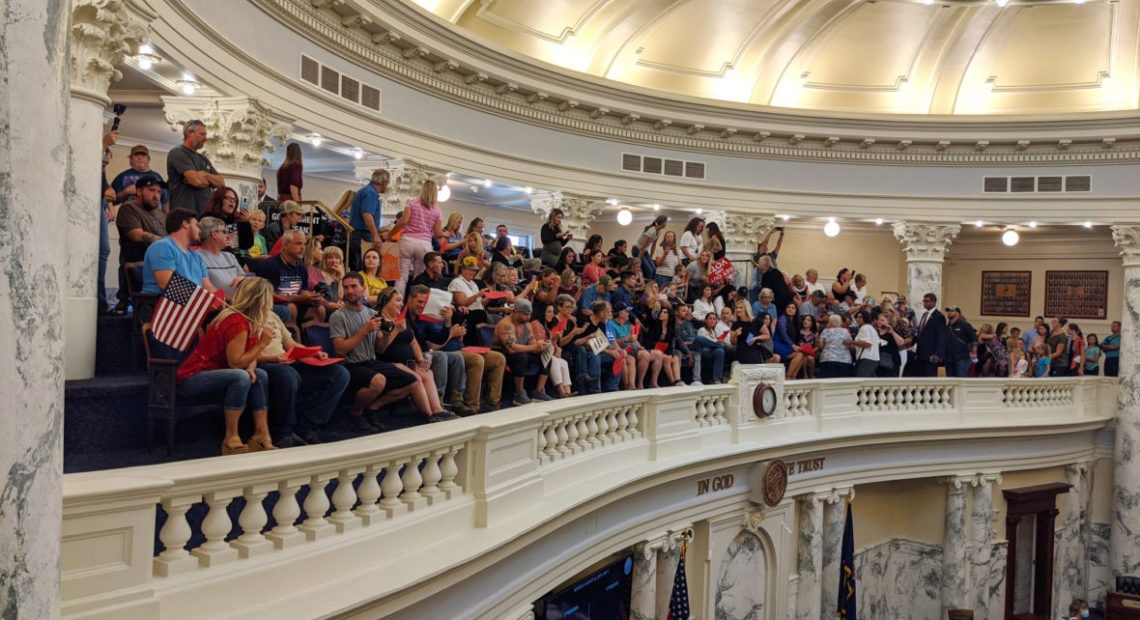 After three unusual days in a special session, the Idaho House and Senate passed a civil liability immunity bill designed to protect school officials from lawsuits amid the ongoing coronavirus pandemic.

Following hours of technical and sometimes bizarre debate in committee and on the floor, the House passed House Bill 6 by a vote of 54-15 Wednesday afternoon.

At about 8:30 p.m. the Senate followed suit, passing it 27-7. Both the House and Senate adjourned the special session for good at about 9:15 p.m.

The bill heads next to Gov. Brad Little’s desk for final consideration. Little said he convened the special session, at least in part, to address civil liability protection during the pandemic.

Under HB 6, a person, school district, college or university would be “immune from civil liability for damages or an injury resulting from exposure of an individual to coronavirus.”

“Our hope is to provide confidence in a crisis of confidence to our schools, to our businesses that they can open their doors, they can serve their patients, they can resume their activities, they can educate our kids, they can go to ballgames,” said sponsoring Rep. Julianne Young, R-Blackfoot.

That immunity, however, would not extend to acts of “willful or reckless misconduct,” according to the bill.

The issue has divided education groups as schools begin reopening for fall.

“Because liability insurance providers do not cover COVID-19 claims, any costs associated with possible litigation would have to be paid out of a school or district’s operating account or pushed onto the taxpayers with a tort levy,” the ISBA said in a written statement.

But the ISBA said the protection should not be absolute.

“The ISBA also believes that this does not absolve districts and schools from ensuring their staff and students are safe,” the statement said. “All schools have been provided ample opportunities to collaborate with local health officials, detailed guidance from the Centers for Disease Control, and the State Board of Education’s Re-Opening Framework.”

Altogether, a House committee considered five liability and immunity bills and killed another during an introductory hearing earlier in the week. During a series of rocky committee hearings that began Monday and continued Wednesday, public testimony ran overwhelmingly against the immunity bills.

But legislators who backed HB 6 said it could give people confidence to return to their normal lives.

“It’s down. The numbers are down,” said Rep. Barbara Ehardt, R-Idaho Falls, in reference to coronavirus cases. “It’s time we get our schools and our businesses and churches back.”

Rep. Ryan Kerby, a New Plymouth Republican and retired school superintendent, said HB 6 would restore some balance to the school reopening debate. School officials, fearing a lawsuit, now have to focus on the numbers behind the virus — which has infected more than 30,000 Idahoans, killing more than 300. Civil liability protection would allow administrators to consider how school closures affect learning and social-emotional health.

“Right now, our parents’ voices are being muffled,” he said.

The bill passed the House along nearly party lines, with Republicans Fred Wood of Burley and Bryan Zollinger of Idaho Falls joining Democrats in opposition.

House Minority Leader Ilana Rubel of Boise downplayed the idea that Idaho businesses and schools are at risk of a “tsunami of litigation.” Idaho has robust law protecting against frivolous lawsuits. In the case of a lawsuit regarding coronavirus, a plaintiff would have to pinpoint the source of an infection, “which is almost impossible,” she said.

During a news conference Wednesday afternoon, House Speaker Scott Bedke said the session ran longer than he wanted — and has been marred by protests that disrupted the process and discouraged Idahoans from participating in the debate. “That’s not how it should be,” said Bedke, R-Oakley.

However, Bedke praised legislators for working their way through the civil liability debate to come up with a compromise bill that would remain in effect into 2021.

In other business from the special session:

Originally posted on IdahoEdNews.org on August 26, 2020