Usually, fire season starts to tamp down in September. This year has been anything but normal. In an unprecedented fire event, at least 80 fires started in Washington over Labor Day weekend.

Strong winds and extremely dry vegetation made for extreme fire danger throughout the Northwest.

“It’s a brutal combination of all of the above,” Washington Department of Natural Resources fire meteorologist Josh Clark said. “If there was a box to check, I would just say all of the above.”

Strong winds and high temperatures are expected to push fires on the west of the Cascades on Thursday, where firefighters are also battling challenging terrain with very dry vegetation. Red flag warnings show critical fire weather and dry conditions in much of western Washington and Oregon.

“It’s a very dangerous combination for our firefighters. It’s very uncommon to have all of these factors coincide on the west side,” Clark said.

East of the Cascades, winds should die down through Friday, but humidity is low and “very, very critical vegetation dryness,” Clark said. That can make fire conditions more challenging.

Fires continue to burn in W WA this morning. East winds are expected again for west slopes with very low humidities. New fires will be difficult to suppress.

“This September, we are seeing quite a ramp up in fire activity, especially for our west side. This will prove to be very much a historic event,” Clark said. “Usually we’re out of the woods, or we’re getting close. This time around, not so much. We still have a very active fire season left.”

Right now, it’s difficult to predict how September will shape up for fire weather, Clark said. Early next week, an upper-level trough could bring strong winds east through the Cascade gaps, ample rainfall or lightning. It’s still too far out to know the details, Clark said.

The extremely dry vegetation will need a lot of precipitation to get back to near-normal conditions or fire season-ending weather, he said.

Many people are comparing this year’s fire season to The Big Burn in 1910, Clark said. 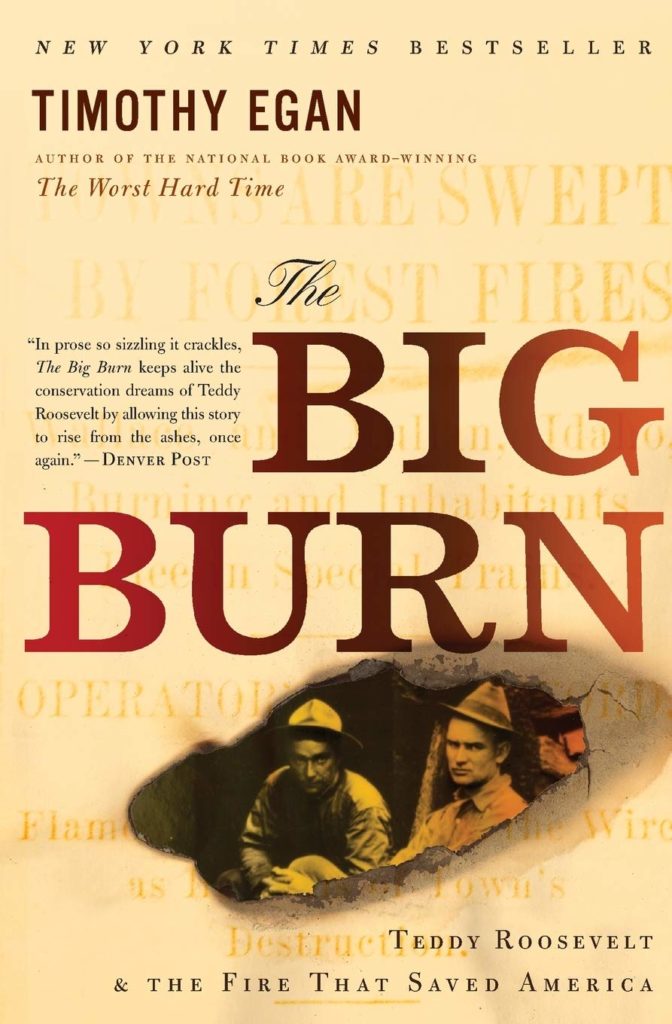 The Big Burn by Timothy Egan documents the causes and aftermath of the great Northwestern fires of 1910.

In that summer, more than 100 fires sparked at the beginning of the summer, as trains went through dry forests. In August, hurricane-force winds pushed already burning fires through western Montana and North Idaho into one of the biggest fires in U.S. history. In the end, 86 people died and more than 3 million acres burned.

That legacy of fire suppression has contributed to larger wildfires in the U.S. West. Along with more people living near fire-prone areas, continued droughts, warmer and drier fire seasons can be dangerous when critical fire weather comes through.

This season in particular has been “the perfect recipe for widespread large fires that resist suppression efforts,” said John Abatzoglou, a climatologist at the University of California, Merced.

It could also be a window into the future, as climate change makes fire seasons longer and more severe. One of the biggest ways climate change will affect fire season is that forest fuels will become much drier, especially in wetter forests, Abatzoglou said.

The timing of snowmelt, spring and summer precipitation and heat all contribute to drier vegetation, he said.

“The observed changes in fuel dryness and number of days of high fire danger have been particularly stark in the West over the past half-century. Some measures put 2020 near the top of the pack (for) climate conditions that enable widespread fire,” Abatzoglou said.

“Moving forward, we have no reason to expect that these ingredients that bring about large fire seasons will wane,” Abatzoglou said. “That said, this type of year won’t (go) beyond the status quo. We should expect benign fire seasons in the mix going forward, just fewer of them, perhaps.”