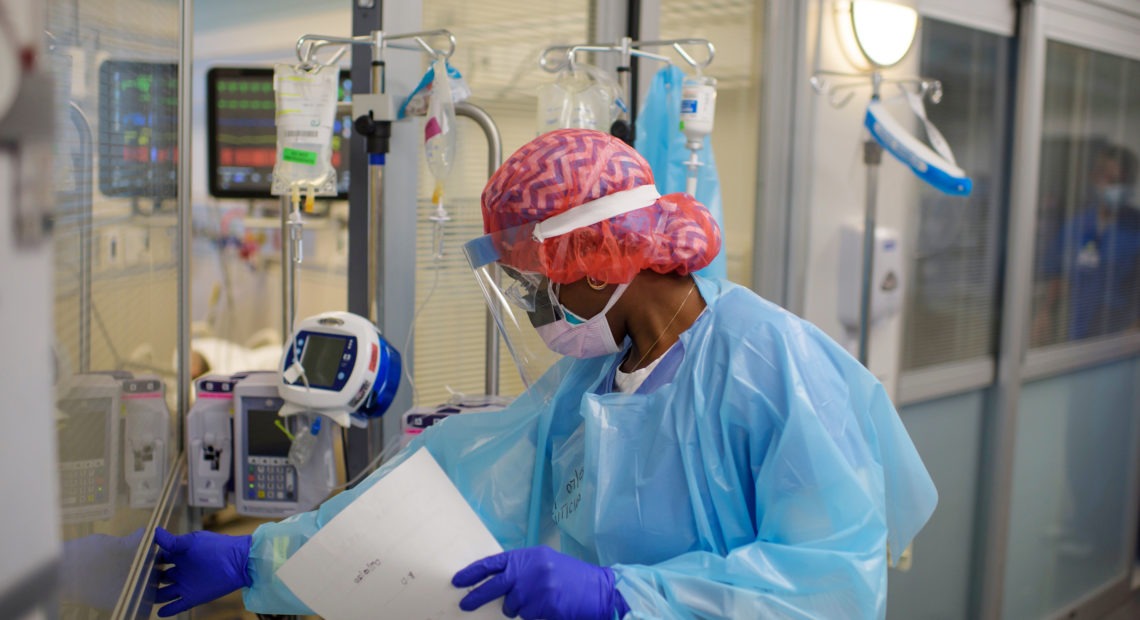 If you think all the coronavirus news is bad, consider the uplifting story of Don Ramsayer.

In early August, Ramsayer was helping his son pack up the car for his freshman year at The Citadel, the Military College of South Carolina. Ramsayer had been having night sweats and wasn’t feeling that well, but he tried to play it down.

“We got the last box packed and it was ready to go in the car, and I finally succumbed to my sister and kids, who said ‘Dad, something’s wrong. Go to the hospital.'”

Don Ramsayer and his sister Melanie Ramsayer speak over FaceTime on August 30. He’d been off the ventilator for 10 days and was finally recovered enough from COVID-19 to be moved out of the ICU.
Courtesy of Don and Melanie Ramsayer

Ramsayer, a software designer and self-described gym rat, had been diagnosed in November with a slow-moving form of leukemia. But the doctors at Emory Johns Creek Hospital, northeast of Atlanta, ran a few tests and concluded that his new symptoms were actually from COVID-19.

He was admitted to the hospital and got sicker and sicker over the weekend. Ramsayer recalls the doctors phoned his sister and told her to prepare for the worst, “because they did not think I was going to make it.”

As his health declined, doctors “basically threw everything in the kitchen sink at me,” he says. “Almost like Sherlock Holmes. ‘What can we try here? What can we try there to get in front of these things?’ ”

Doctors gave him a newly available antiviral drug, remdesivir, as well as an experimental treatment called convalescent plasma. That involves transfusions of blood plasma from people who have recovered from COVID-19 and carry antibodies that might help fight the virus.

He also ended up on a ventilator for nine days, under heavy sedation.

Ramsayer himself rather unexpectedly ended that phase of his treatment.

“Somehow I got out of the straps,” he says in an interview from his hospital bed. “I completely unhooked myself … and pulled the breathing tube out. And here’s the really funny thing. I’m obviously pretty doped up. They had me on all kinds of stuff and how I was even conscious, they aren’t even sure of that. The first thing I do is I say, ‘Can I have a Coke?’ ”

He says doctors at first considered reinserting the breathing tube, but they saw he could breathe on this own well enough.

“I continued to improve from that point forward,” he says.

Ramsayer’s story is remarkable, considering his cancer and the complications of his case. But this story is far from unique.

“We have very much replicated what’s been seen worldwide, which is over time the mortality in ICUs have decreased,” says Dr. Craig Coopersmith, director of the Emory Critical Care Center. He oversees ICUs at five hospitals in the Emory system, including Johns Creek.

The decline in mortality related to COVID-19 varies month to month. At Emory it has been in the range of 20% to 50%. Coopersmith says there are lots of reasons for that.

A big one is that, when the first wave of Covid-19 hit Atlanta’s hospitals in April, doctors had no experience with the disease. Medical management of these patients is now, by comparison, routine.

“There’s certainly nothing routine about the pandemic,” Coopersmith says, “but in terms of how we’re managing it, once you have taken care of something for the tenth time, it is normal.” 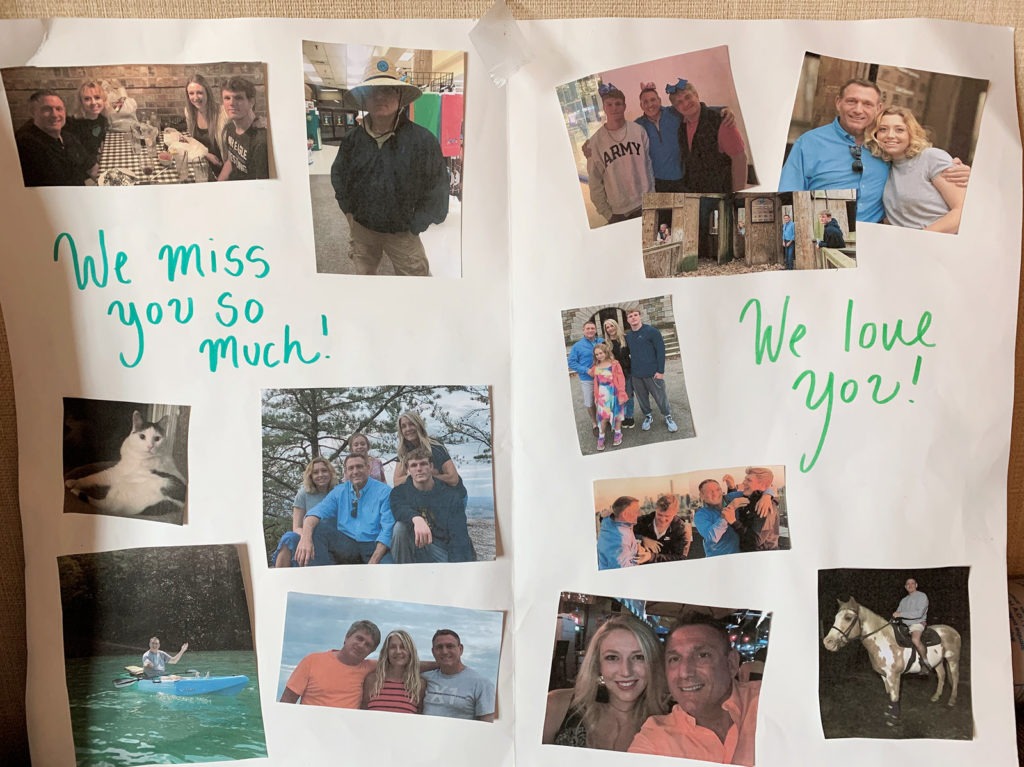 A poster filled with photographs in Don Ramsayer’s hospital room — a reminder of those at home cheering him on.
Courtesy of Don and Melanie Ramsayer

Doctors can better handle common and serious complications like blood clots. They realized that patients do better if they aren’t lying on their backs all the time. Patients in Emory hospitals are encouraged to spend some time lying on their stomachs. That simple effort sometimes is enough to keep them out of the intensive-care unit.

Ramsayer found it uncomfortable to sleep on his stomach — he says he has a couple of blown disks as a result of his days as a powerlifter — but he did sleep on his side when he could.

And while no medicine can cure COVID-19, a series of studies showed that steroids can benefit the sickest patients.

Emory, like many medical centers, had not been using steroids such as dexamethasone routinely to treat COVID-19 until a major study from the United Kingdom showed that these drugs reduce the risk of death among seriously ill patients. 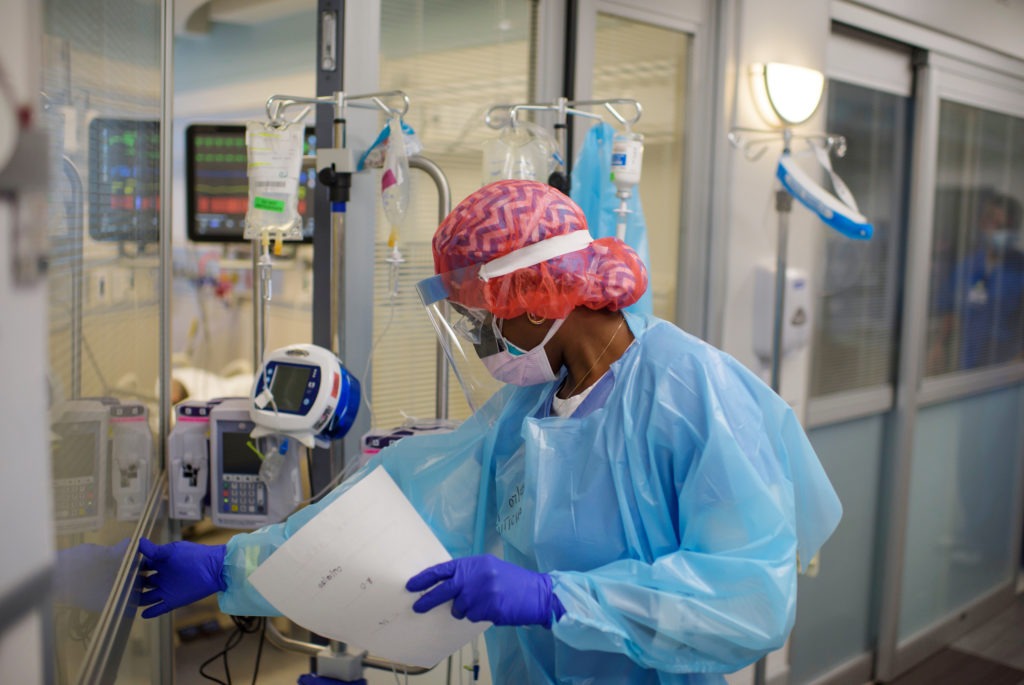 Niticia Mpanga, a registered respiratory therapist, checks on an ICU patient at Oakbend Medical Center in Richmond, Texas. The mortality rates from COVID-19 in ICUs have been decreasing worldwide, doctors say, at least partly because of recent advances in treatment.
CREDIT: Mark Felix/AFP via Getty Images

“So that’s a tremendous success story,” Coopersmith says. “In just a few months we have a drug which is easily available everywhere and quite cheap, and which improves survival significantly in the ICU patient population.”

The trend in improving survival has been documented in intensive care units around the world. Even so, people treated in the ICU for COVID-19 are at higher risk of death than is the case for other viral lung diseases. Across the United States, hundreds of people still die daily from COVID-19.

Coopersmith credits some of the improvements in treatment to scientific advances, as was the case for steroids. He says it also helped that, for the past six months, all the attending physicians shared their observations and ideas with one another on a daily text chat, “and in that we find the art of medicine.”

Ramsayer also credits his own deep faith in God for getting him through the ordeal. When we spoke, he was getting ready to be discharged after more than five weeks in the hospital.

“I’m walking, sitting, I can get around. My only limitation is just my oxygen requirement,” he says. He considers that a mere inconvenience.

He’s eager to return to his work as a software designer, and to keep working with his doctors to figure out the right treatment for his leukemia.

“That’s something we’ll tackle once I get back on my feet.”