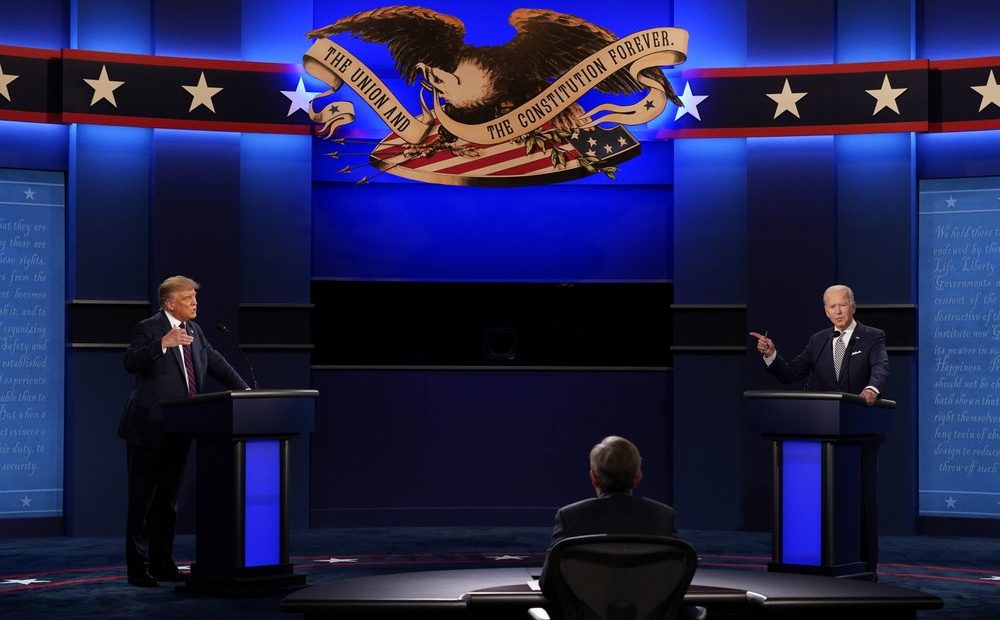 The first debate between President Donald Trump and Democratic challenger Joe Biden deteriorated into a bitter showdown Tuesday as the president repeatedly interrupted his opponent with angry — and personal — taunts that sometimes overshadowed the sharply different visions each man has of a nation facing historic crises.

In the most chaotic presidential debate in recent memory, Trump refused to condemn white supremacists who have supported him, telling one such group known as Proud Boys to “stand back, stand by.” There were also heated clashes over the president’s handling of the pandemic, the integrity of the election results, deeply personal attacks about Biden’s family and how the Supreme Court will shape the future of the nation’s health care.

But it was the belligerent tone that was persistent, somehow fitting for what has been an extraordinarily ugly campaign. The two men frequently talked over each other with Trump interrupting, nearly shouting, so often that Biden eventually snapped at him, “Will you shut up, man?”

“The fact is that everything he’s saying so far is simply a lie,” Biden said. “I’m not here to call out his lies. Everybody knows he’s a liar.”

The presidential race has been remarkably stable for weeks, despite the historic crises that have battered the country this year, including a pandemic that has killed more than 200,000 Americans and a reckoning over race and police brutality. With just five weeks until Election Day and voting already underway in some key states, Biden has maintained a lead in national polls and in many battlegrounds.

It’s unclear whether the debate will do much to change those dynamics.

Over and over, Trump tried to control the conversation, interrupting Biden and repeatedly talking over the moderator, Chris Wallace of Fox News. The president tried to deflect tough lines of questioning — whether on his taxes or the pandemic — to deliver broadsides against Biden. 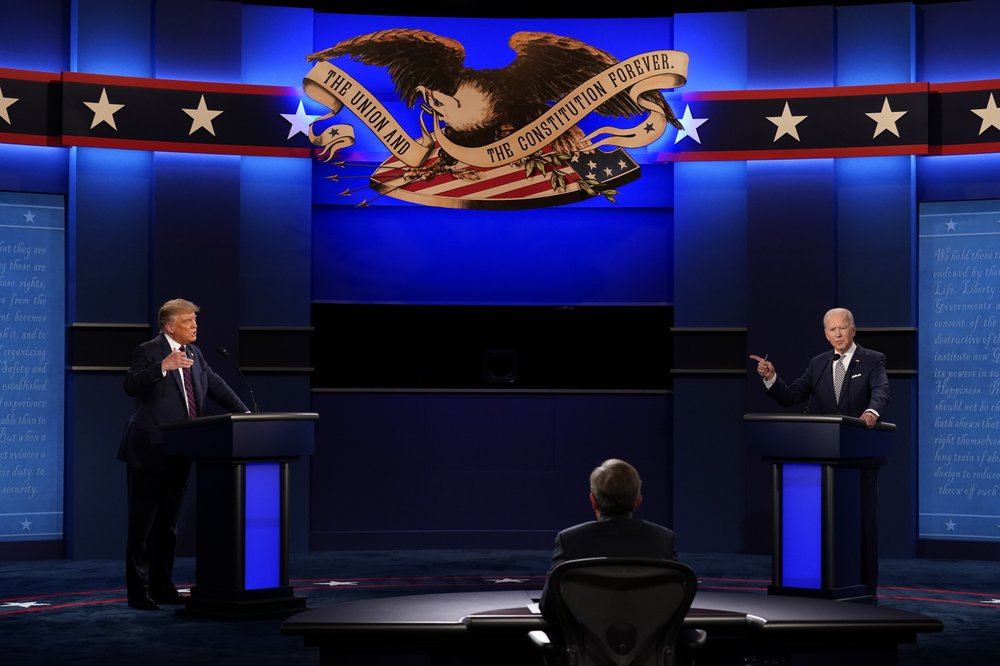 The president drew a lecture from Wallace, who pleaded with both men to stop talking over each other. Biden tried to push back against Trump, sometimes looking right at the camera to directly address viewers rather than the president and snapping, “It’s hard to get a word in with this clown.”

Again refusing to commit to honoring the results of the election, Trump spread falsehoods about mail voting. Without evidence, he suggested that the process — surging in popularity during the pandemic — was ripe for fraud and incorrectly claimed impropriety at a Pennsylvania voting site.

But despite his efforts to dominate the discussion, Trump was frequently put on the defensive and tried to sidestep when he was asked if he was willing to condemn white supremacists and paramilitary groups.

“What do you want to call them? Give me a name. Give me a name,” Trump said, before Wallace mentioned the far right, violent group known as the Proud Boys. Trump then pointedly did not condemn the group, instead saying, “Proud Boys, stand back, stand by. But I’ll tell you what, somebody’s got to do something about Antifa and the left because this is not right-wing problem. This is a left wing problem.”

Biden attacked Trump’s handling of the pandemic, saying that the president “waited and waited” to act when the virus reached America’s shores and “still doesn’t have a plan.” Biden told Trump to “get out of your bunker and get out of the sand trap” and go in his golf cart to the Oval Office to come up with a bipartisan plan to save people.

Trump snarled a response, declaring that “I’ll tell you Joe, you could never have done the job that we did. You don’t have it in your blood.”

“I know how to do the job,” was the solemn response from Biden, who served eight years as Barack Obama’s vice president.

The pandemic’s effects were in plain sight, with the candidates’ lecterns spaced far apart, all of the guests in the small crowd tested and the traditional opening handshake scrapped. The men did not shake hands and, while neither candidate wore a mask to take the stage, their families did sport face coverings.

Trump struggled to define his ideas for replacing the Affordable Care Act on health care in the debate’s early moments and defended his nomination of Amy Coney Barrett, declaring that “I was not elected for three years, I’m elected for four years.”

“We won the election. Elections have consequences. We have the Senate. We have the White House and we have a phenomenal nominee, respected by all.”

Trump criticized Biden over the former vice president’s refusal to comment on whether he would try to expand the Supreme Court in retaliation if Barrett is confirmed to replace the late Justice Ruth Bader Ginsburg. That idea has gained momentum on the party’s left flank but Biden tried to put distance between himself and the liberal wing, declining to endorse the Green New Deal and rejecting the assertion that he was under the control of radicals by declaring “I am the Democratic Party now.”

The scattershot debate bounced from topic to topic, with Trump again refusing to embrace the science of climate change while Biden accused Trump of walking away from the American promise of equity for all and making a race-based appeal.

“This is a president who has used everything as a dog whistle to try to generate racist hatred, racist division,” Biden said.

Recent months have seen major protests after the deaths of Black people at the hands of police. Biden said the country faces a problem with systemic racism and that while the vast majority of police officers are “decent, honorable men and women” there are “bad apples” and people have to be held accountable.

Trump in turn claimed that Biden’s work on a federal crime bill treated the African American population “about as bad as anybody in this country.” The president pivoted to his hardline focus on those protesting racial injustice and accused Biden of being afraid to use the words “law and order,” out of fear of alienating the left.

The attacks turned deeply personal when Trump returned to a campaign attack line by declaring that Biden’s son, Hunter, had inappropriately benefitted from his father’s connections while working in Ukraine. Biden rarely looked at Trump during the night but turned to face the president when he defended his sons, including his son Beau, an Army veteran who died of cancer in 2015, after the commander-in-chief’s reported insults of those who served in the military.

A new report from two Republican-led Senate committees alleged that Hunter Biden’s work in Ukraine at the same time his father was vice president raised conflict-of-interest concerns for the Obama administration, but the report did not link Joe Biden to any wrongdoing or misconduct. Trump was impeached for pushing Kiev to investigate the Biden family.

The debate was arguably Trump’s best chance to try to reframe the campaign as a choice between candidates and not a referendum over his handling of the virus that has killed more people in America than any other nation. Americans, according to polling, have soured on his leadership in the crisis, and the president has struggled to land consistent attacks on Biden.

In the hours before the debate, Biden released his 2019 tax returns just days after the blockbuster revelations about Trump’s long-hidden tax history, including that he paid only $750 a year in federal income taxes in 2016 and 2017 and nothing in many other years. The Bidens paid nearly $300,000 in taxes in 2019.

Trump, in the debate, insisted that he paid millions in taxes — but refused to say how much he paid in federal income taxes — and insisted that he had taken advantage of legal tax incentives, another angry exchange that led to Biden declaring that Trump was the “worst president” the nation has ever had.