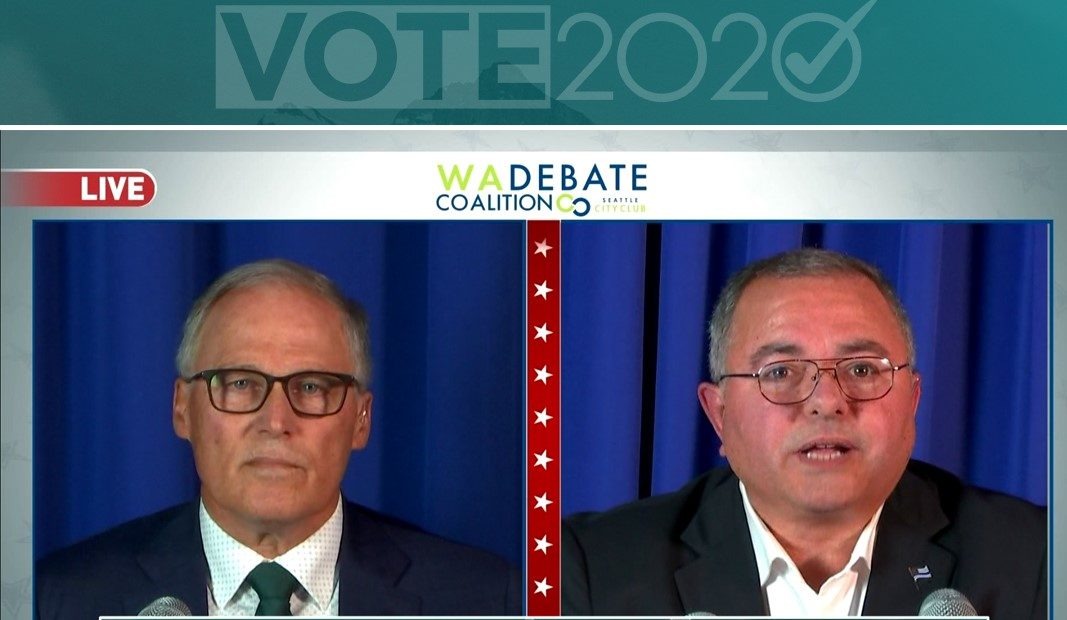 Washington voters got their first glimpse of how the two candidates for governor feel about the same issues at the same time. Two-term Gov. Jay Inslee met with his Republican challenger, Republic police chief Loren Culp, Wednesday night for a one-hour debate.

Inslee focused less on what he planned to do over the next four years and more on his record on healthcare, working on climate policy, and getting out of the COVID health and economic crisis over the past eight years – a record that Culp challenged.

Culp highlighted his own experience as a business owner running a construction operation in the Puget Sound region and his time in the military to make the case for his leadership abilities. He highlighted his experience not only as a police officer and small-town police chief for 10 years, but his views on elected officials being public servants.

“Everyone in government, whether appointed or elected, are public servants,” Culp said in response to his take on how to handle the coronavirus pandemic. “And I firmly believe in individual freedom and liberty. … The problem is when we have one person sitting in the governor’s office telling everyone what they’re going to wear, whether they’re going to go to work. … That’s the problem that I’ve had with this.”

Inslee was emphatic during the debate, as he has been over the past six months, that the steps the state has taken, from the stay-at-home order in March to stopping in-person school earlier this spring to later on requiring people wear masks while inside public space, have “saved lives.”

Culp has said he would let public health officials and scientists tell the public what needs to be done to address the pandemic and let people decide – and that he wouldn’t enforce and impose emergency orders.

“Is that the new ‘deplorables?”

On several occasions Inslee mentioned his main foil over the past several years: President Donald Trump. The governor frequently criticizes the president on Twitter and in his own press conferences, just as he did when he was running for the Democratic presidential nomination in 2019.

In a recurring theme during the debate, Inslee tried to connect Culp to Trump’s politics, even at one time suggesting that people who attend Culp’s rallies are very “Trumpian.” Culp shot back in response wondering if that was supposed to be “the new deplorables,” referencing what Hillary Clinton said in 2016 about some of Trump’s supporters being in “a basket of deplorables.”

The two candidates on the general election ballot for Washington Lt. Governor – Congressman Denny Heck and state Sen. Marko Liias – will meet in a statewide televised debate on Thursday, Oct. 22.

Because of Washington’s top-two primary system, two Democrats will be on the general election ballot. Republican Joshua Freed, who ran for governor during the primary, is mounting a write-in campaign to have a Republican option. But he won’t be at the debate due to rules from the Washington State Debate Coalition.