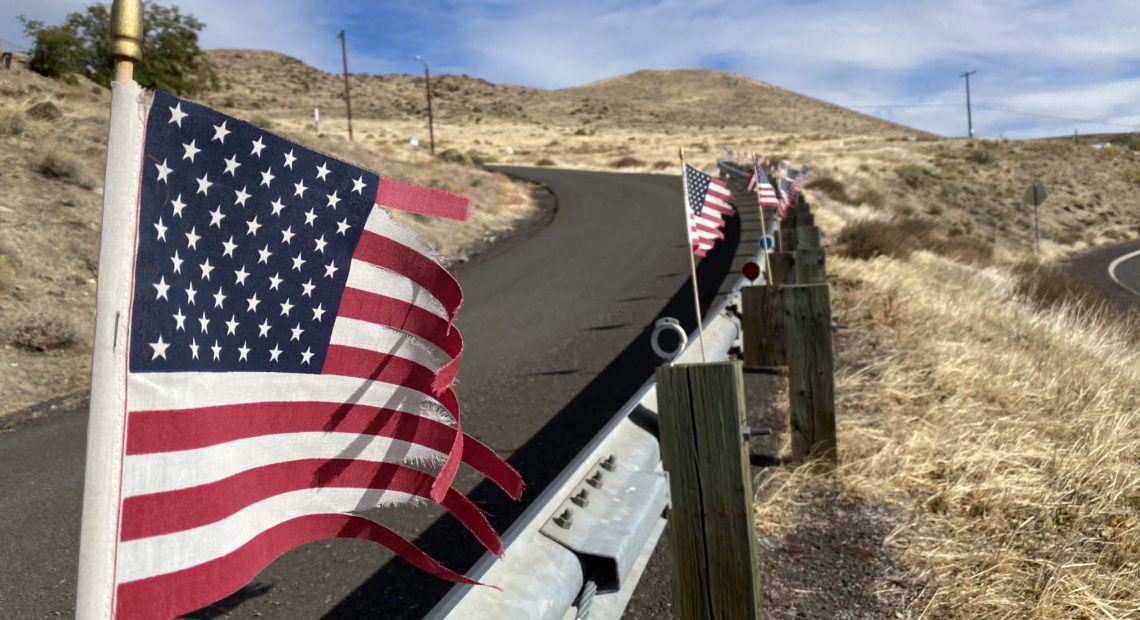 The water body that defines and geographically splits Washington and Oregon throws up billows of milky steam.

As I drive south from the Tri-Cities toward Oregon, there’s fog so thick I can hardly see ahead of me. My heart pounds for a few moments wondering what’s just ahead. Then, I break clear again, and the sunrise roars through in bright red and gold.

I’m on my way to Mission, Oregon. I’m tired, but almost halfway through my week of road travel. Just like that foggy highway on the road to Mission, it’s hard to tell which way America is going right now.

In total, I saw five sunrises and drove more than 1,000 miles on my way to five towns spanning both sides of the Columbia in eastern Washington and Oregon. And I listened hard to the worries and hopes of as many as 100 hundred voters.

Here’s some of what I heard:

The rolling stubbly hills outside Colfax are as blonde as a palomino’s slick flanks. Two key highways — and wheat — drive this Palouse-region town.

I met Jeremy Robertson, a social worker in Colfax. He believes in helping marginalized people, but believes those benefits must be earned.

He prefers less government and loves living in Colfax, where community connections are tight. “Something goes sideways for someone, and everyone steps in,” he says.

People often stay in Colfax for life. Many worry about gun rights. All want a strong economy.

Kim Hamilton says she moved to a ranch near Colfax, got a new job and this year she’s seen a lot more of her husband, who used to travel way more for work.

After a long day here, I felt sure this is mostly deep red Trump country.

“Everything is his fault? That’s hard to believe,” Jeff Stolz says of Trump. 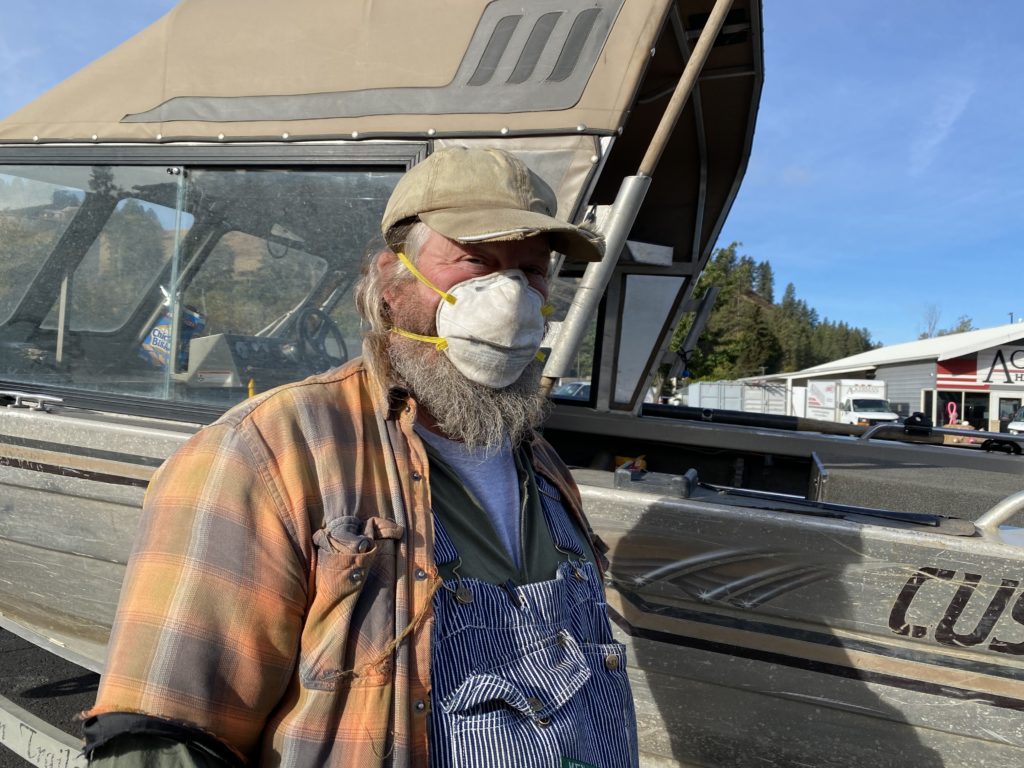 Chris Boyd of Palouse, Washington, near Colfax, raises the quail species Coturnix, which are popular to feed to birds of prey. He’s not a Trump supporter. He calls the president the “crookedest bastard I’ve ever seen since Nixon.” CREDIT: Anna King/N3

But there are of course non-Trump supporters here, like Chris Boyd. He calls “getting rid of Trump” his top priority in voting this year. He says the president is the “crookedest bastard I’ve seen since Nixon.”

The Dalles sits between wet and dry, bluffs and the Columbia River.  Electricity flows out of dams and, more recently, wind turbines. It’s a rest stop on the trail — for tribes, pioneers and Interstate-84 travelers.

“The economy is probably number one,” says Robin Urness, a retired financial planner. She was pleased with the choice of Amy Coney Barrett for the U.S. Supreme Court. “I really like that Donald Trump is not a career politician,” Urness tells me.

Dana Campbell says the isolation of the pandemic has been hard. She has stayed quarantined so she can visit her 95-year-old mother. She worries about the environment and climate change, too.

“I am amazed how many people don’t buy into understanding what we’re already seeing and what it used to be like,” Campbell says.

There were many Trump supporters in the Dalles, but I did meet several people who were for Biden, were concerned about climate change or worried that the pandemic was worsening with poor leadership. 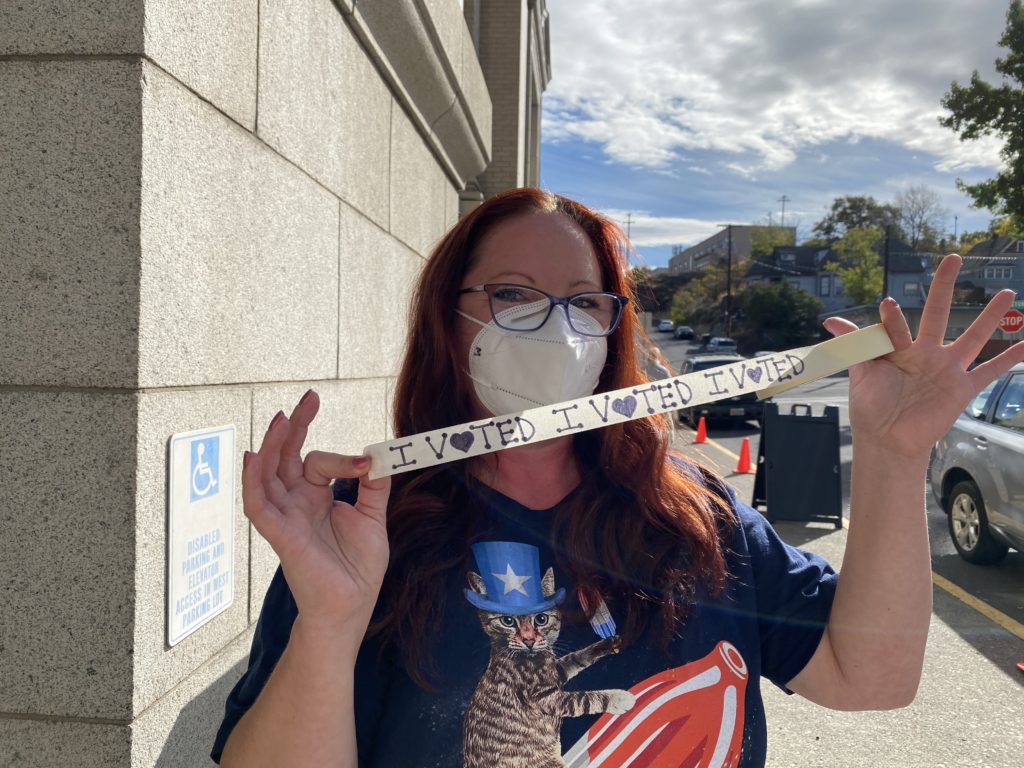 Katrina Arnell of The Dalles says she wasn’t able to get married this year, lost her job and couldn’t see her grandmother much due to the pandemic. She’s hoping for a vaccine, and a return to civility: “As much as possible, as soon as possible.” CREDIT: Anna King/N3

The Dalles is truly a political crossroads: wide-open out east and west to Portland. Here, like everywhere I went, the economy and the pandemic were tied for first place on the tops of voters’ minds.

“First is keeping people safe, and two is opening up the economy and not putting people at risk,” says David Ling, who works in property management.

Brandie Weaskus says she’s been helping to register new voters on the reservation.

“I just hope we don’t have a civil war from the aftermath of how the current president has created so much animosity over race, nationwide,” she says. “And not trying to unite us as a nation. He’s done the opposite.”

Here, like other rural towns, there was hope and anxiety.

Sandra Sampson has been working to fight COVID-19 on the reservation. Access to health care is her top issue. She’s worried about pre-existing conditions. Her son had COVID-19 and was on a ventilator. “I think for Trump to say it’s OK to go out without precaution has been difficult to me,” Sampson says.

Jim Harrison, a contractor, says someone ran over his mailbox with his ballot in it, but he’s determined to vote.

“I want America to be what America was, not what it is today,” Harrison says. “I came to America from a foreign country. I had to wait to be adopted. I didn’t swim the river, cross the border and come here illegally.” 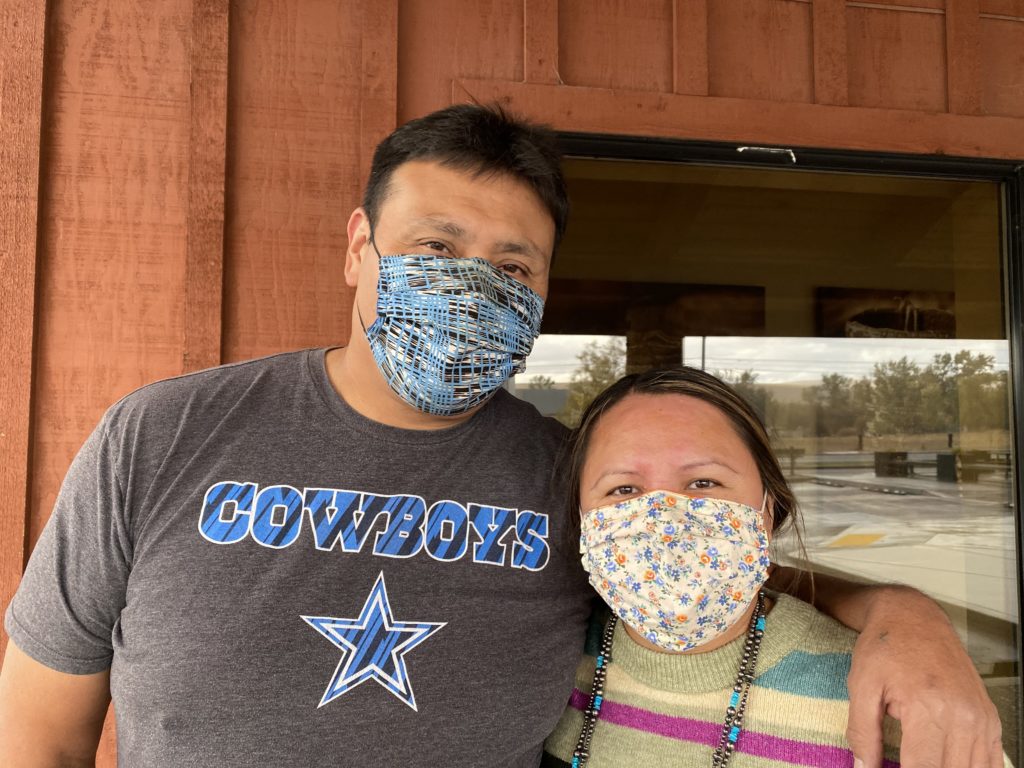 Jerrid Weaskus and his wife Brandie live in Mission, Ore. He says “The science is telling us that we have to change our ways. And we’re not listening. Why? Because money is too important, right?” CREDIT: Anna King/N3

Walla Walla began as Native ground, then became a frontier mission. Now it’s a college town known for elegant wine. The majority of people I meet here lean Biden. But everyone is anxious.

Trump supporter Wylie Warner is about to lose his job.

He doesn’t like Democratic social programs, but he says: “We need to try to figure out how to get the two different sides of the Democrats and the Republicans working together.”

“I care about people coming together and listening to each other and unity really,” Huffey says. 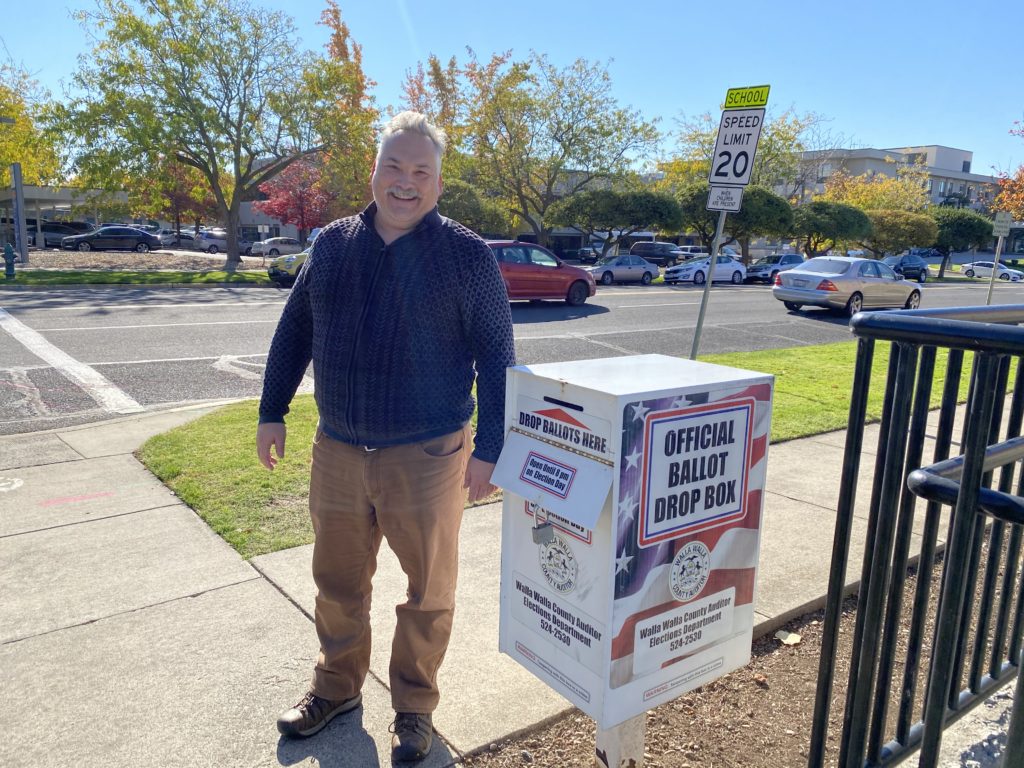 Trump supporter Wylie Warner is about to lose his job at a Walla Walla-area winery because of the pandemic. “I don’t think Trump’s gonna win,” he says. “It’s who I voted for, but I don’t think he’s gonna win.” CREDIT: Anna King/N3

Cynthia Hurlbutt calls the election, the “E word” — like it’s a subject not to bring up in polite company. She cares most about women’s rights and healthcare. On the economy, she hopes the next president will focus on “helping out small business, maybe regulating corporations, restructuring of the tax system.”

Workers snap apples off branches in a frenzy. They’re trying to save the fruit before the coming cold snap renders it mush. Agricultural work drew migrants here. Almost everyone we talked to has opinions about Donald Trump.

“Well, they promise one thing and then they don’t deliver,” Atunez says.

Others here, like Ashely Sandoval, are happy with the job the Trump administration is doing.

“I find it refreshing to have a businessman in office, rather typical than all politicians,” Sandoval says.

Ramiro Sanchez is a concrete finisher from nearby Beverly, Washington. He was holding his toddler son, Mike. 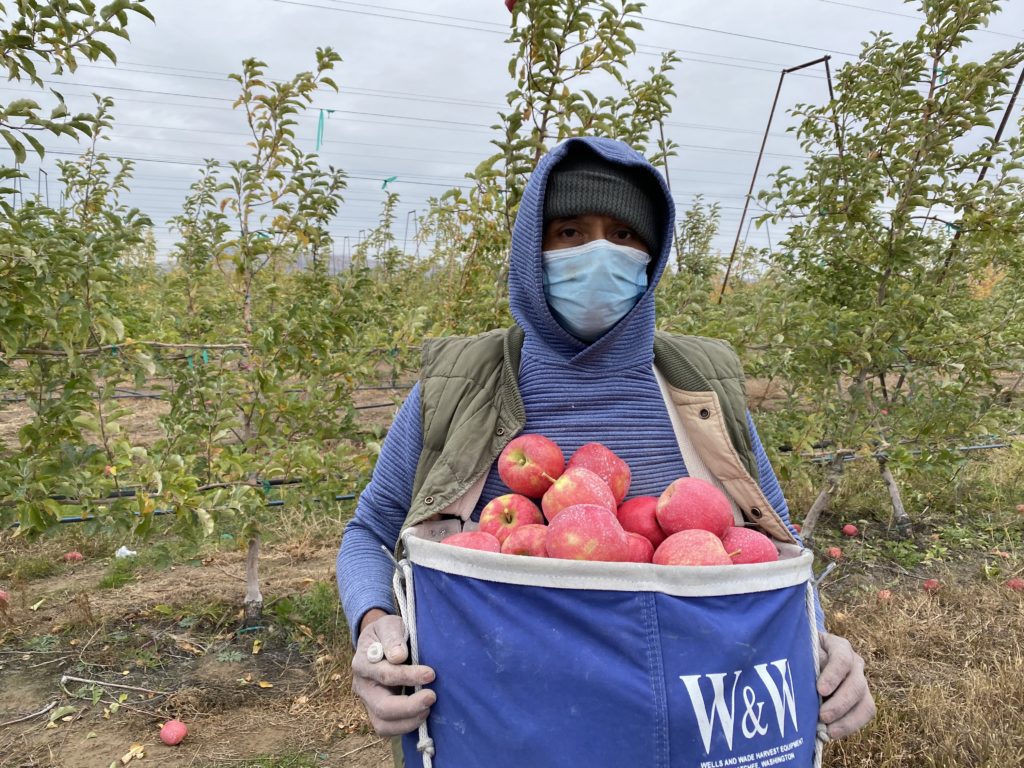 Rojelio Alvaro was hustling to get the apple harvest done before the cold set in. Like many people in Mattawa and Mission, Oregon, he was reluctant to give his political opinions. CREDIT: Anna King/N3

Karla Rangel is a few months shy of being able to vote. She’s spent her senior year of high school at home and online, making sure three younger children are doing their schoolwork too. It’s not how she envisioned her senior year. “We don’t get school. Our graduation might be different. It kinda sucks.”

As I raced home from Mattawa across central Washington’s arid landscape to head off a bout of late-October snow, I thought of everyone I had met along the way. Our region and people are shaped by geology, a deep history, power-production, crops and industry. 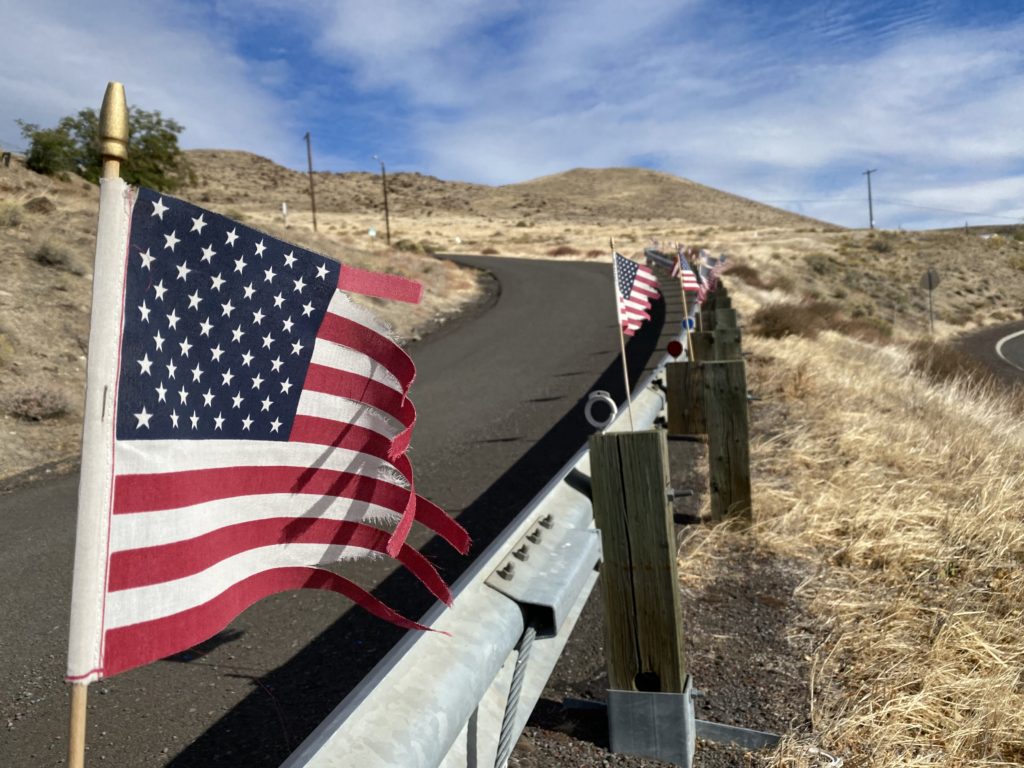 I’d been here before, in the 2016 election. Four years ago I saw bumper-stickers and yard signs for Trump everywhere.

Not so much this year.

The divisions are deep. But there are points of agreement this year. Most everyone I met say the top concerns are the economy and the coronavirus pandemic.