What would Beethoven have when he was hungry?

He’d have mac and cheese! The Viennese version, of course: Kaesespaetzle, or “cheese noodles;” tiny dumplings topped with crispy onions. For Ludwig’s 250th anniversary year, may we suggest he spice things up with a pepper and a sprig of rosemary? How about some Cougar Gold instead of that Parmigiano-Reggiano? Keep reading for Kaesespaetzle, Cougar Gold and Thom Kokenge’s fondly-remembered “bachelor food” mac&cheese recipes.  Do you have your own favorite mac and cheese recipe? Share it here. 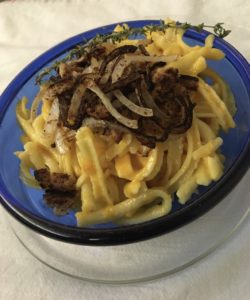 WHAT BEETHOVEN ENJOYED, made by his housekeeper or the folks at the tavern—Kaesespaetzle (“cheese noodles”), a Viennese tradition—involves a soft dough dropped through a colander into boiling water, with a texture more like a dumpling. (Heads up on a head start: Cooking instructions for the dry commercial “Blackforest Style traditional German egg noodles” say boil for 16 minutes!)

Here’s the whole recipe, from noodle-making to garnish, courtesy of austria.info.

FOR THE ONIONS:
3 oz. butter
2 mid-sized onions, cut into rings

STEP 1:
Combine flour, eggs, and a good-sized pinch of salt. Blend well and add, if necessary, water, spoon by spoon. The dough should not be runny, but soft enough to gradually follow gravity. Then set aside and allow the dough to rest for 20 to 30 minutes.

STEP 2:
Meanwhile, heat the butter in a frying pan over low to medium heat, add onions, and let them slowly turn golden brown. Don’t let them get too dark, as they tend to become bitter. Drain on a paper towel and set aside.

STEP 3:
Boil a large pot of water, add a pinch of salt, then reduce heat. The water should simmer throughout this whole process. You can either cut and shape the spaetzle by hand or use a spaetzle maker or a colander (which you hold over the boiling water, as you rub the dough against the holes, so that it drips right down into the water).  Cook the spaetzle for about 2-3 minutes. As they float back to the surface, scoop them out with a slotted spoon

STEP 4:
When they’re all out, drain the water, melt 1-2 Tbsp. butter in the same pot, and put the spaetzle back in. Shake the pot a few times to evenly distribute the butter, then add the grated cheese and mix well. Serve with the browned onions and some chopped chives on top.

(Suggested by Jamie Huber of development team NWPB, via creamery.wsu.edu) 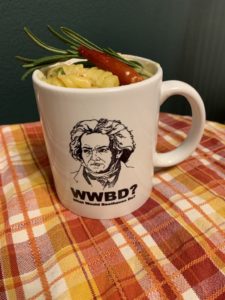 Music Host Anjuli Dodhia dressed up her Cougar Gold Mac and Cheese with a garnish and a mug. CREDIT: Anjuli Dodhia/NWPB

Bring the water, salt and pasta to a rolling boil in a medium saucepan. Cook just until tender. Drain pasta, put into prepared baking dish and set aside. Meanwhile prepare the sauce. In a saucepan over medium-low heat, melt 2 tablespoons of butter. While whisking, gradually add the flour. Whisk for about 2 minutes or until golden and bubbling. Very slowly add the milk, whisking constantly to avoid developing lumps. Simmer for 15 minutes until thickened, stirring often to prevent mixture from burning. Remove from heat and stir in Cougar Gold® and black pepper to taste. Pour sauce onto cooked pasta (do not stir). Melt 1 tablespoon butter and toss with breadcrumbs. Sprinkle on top of casserole and bake for 30 minutes or until the crumbs are golden.

This is what we lovingly call “Bachelor Food,” because I would make this when I was a bachelor, and still make it on occasion. It’s really tasty.

Make the noodles as the box says. While they boil away, put a cup of peas with some water into a microwave-proof bowl (and use this bowl later to eat out of) then microwave long enough to make them hot, a minute or so. Open the can of tuna and drain the liquid. After the mac is cooked and strained, put ‘em back into the pot, add the peas and tuna and stir. Now add the rest of the ingredients to make the “cheese” (usually a orange powder packet, milk, and butter/margarine). Stir that all up until well combined. Eat out of the bowl you nuked the peas in. It has everything you need.

Beverage pairing: Beer. Whatever you’ve got. A simple lager works well. Or wine out of a box.