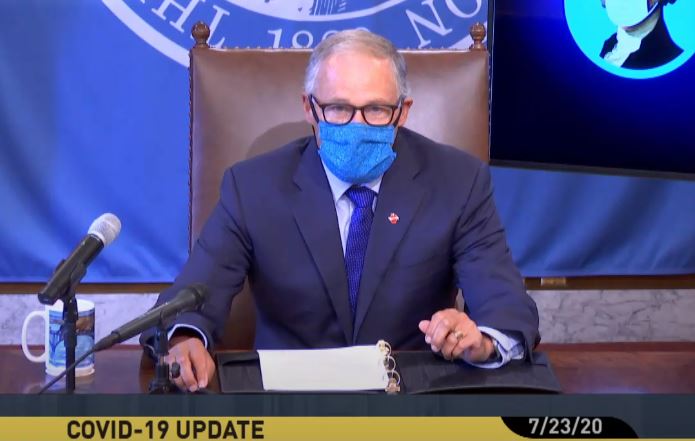 Washington Gov. Jay Inslee has scheduled an unusual Sunday news conference to announce new restrictions to combat what his office calls “the rapid and alarming rise of COVID in our state.”

Previously, Inslee’s office had said an announcement would be forthcoming as early as Monday.

While Inslee’s office did not release details in advance of the 11 a.m. Sunday event, industry group emails sent to grocery store and restaurant owners, and obtained by the public radio Northwest News Network, outlined what Inslee is expected to order.

Those details were based on information shared during a meeting between Hetrick and the governor’s office, according to the email.

“We realize the occupancy limits are extremely frustrating as we move into the busiest season of the year,” Hetrick wrote in her email. 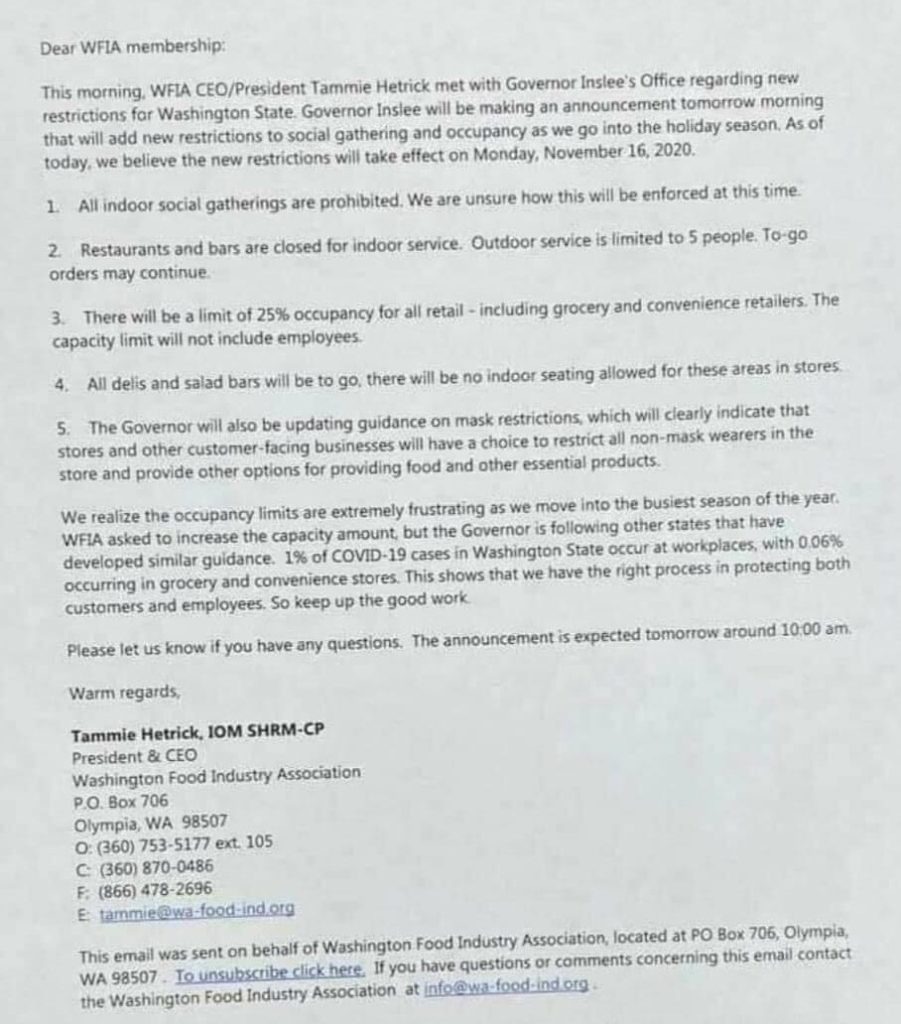 Washington Gov. Jay Inslee was expected to issue new restrictions for bars, restaurants and retail on Nov. 15, 2020. The Washington Food Industry Association sent out such guidance to its member the day before. Courtesy of WFIA

A separate email sent to restaurant owners from the Washington Hospitality Association also said indoor dining would not be allowed and that the new rules would be in effect until December 14.

“While this could still change, the odds are now very low,” wrote Anthony Anton, president and CEO of the Washington Hospitality Association.

The Seattle Times was the first to report on the new restrictions in Washington, which are expected to go into effect this week and would represent the most sweeping limits since Inslee issued a stay home order in March.

On Saturday evening, an Inslee spokesperson did not dispute the details of the emails and said more information would be shared on Sunday morning.

In her email to WFIA members, Hetrick also said 1% of COVID cases occur at workplaces and 0.06% in grocery and convenience stores. The source of those figures was not clear and Hetrick did not immediately respond to a voicemail and email.

The email noted that the WFIA had asked Inslee’s office to increase the capacity limit, “but the Governor is following other states that have developed similar guidance.”

On Friday, the governor of New Mexico ordered a 25% capacity restriction at grocery stores and other “essential” retailers, according to Newsweek.

Also Friday, Oregon Gov. Kate Brown announced a fresh round of restrictions, including a 75% capacity limit on grocery stores.

The email from the Washington Hospitality Association said fewer than one-half of one percent of COVID cases have been traced to restaurants and that it was preparing a “message of disappointment” to share after the governor’s announcement. It also called the restriction on indoor dining “devastating” and said it could lead to 100,000 hospitality workers losing their jobs right before the holidays.

“I am heartbroken as I realize this might be the end to many of your dreams,” Anton wrote.

The fresh round of COVID-related crackdowns come as Washington, and the nation, see a spike in cases.

Recently, Washington has been breaking daily records for the number of people testing positive for the virus. To date, the state has experienced nearly 128,000 cases, more than 9,200 hospitalizations and 2,519 deaths.

Last week, Inslee, Brown and California Gov. Gavin Newsom issued a joint travel advisory that asks people to quarantine for 14 days upon arrival in one of the three west coast states, or after traveling out of state.

On Thursday, Inslee and first lady Trudi Inslee delivered a televised address during which they pleaded with people to cancel their holiday travel and celebration plans.