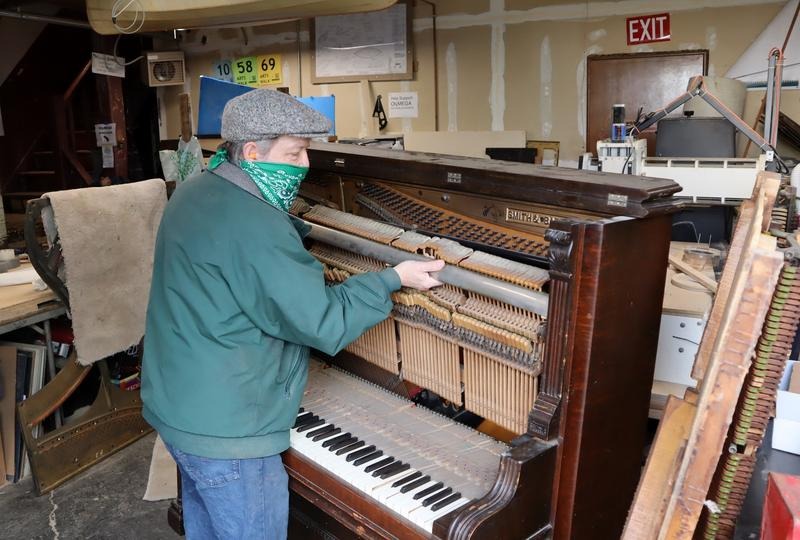 Sure, you’re a good Pacific Northwesterner because you recycle your beer cans, cardboard boxes and plastic milk jugs. But what about that dust-collecting piano you have long wanted to unload? It doesn’t fit into the recycling bin. Creative upcycling might be the answer.

A group of friends in Olympia is starting an off-beat enterprise to tear apart and recycle pianos after noticing how online marketplaces are awash in pianos that aren’t selling at any price.

“It’s just fallen out of fashion to have your kids learn that particular instrument,” observed Michael Rohde, the group’s leader. “There are all sorts of keyboards that are much cheaper and more appropriate for the type of music that kids are probably interested in anyway.”

On the Tuesday before Christmas, the semi-retired, self-described tinkerer and woodworker set about with his three collaborators, all in their 60s and 70s, to disassemble a 120-year-old Smith & Barnes upright piano. They used as their workshop the local “makerspace” in downtown Olympia where they are all members.

“Aha!” shouted one of the makers as he discovered a coin underneath the piano keys while his comrades deciphered a crumpled receipt apparently lost inside the piano since 1951. The workshop briefly echoed with popping sounds like rapid-fire gunshots when Rohde cut through a row of tensioned steel piano strings with a side grinder.

Michelle Schut, a mom of three from Olympia, gave this piano away for free ahead of a planned move to Spokane. She said it made no sense to her to haul the beast across the state.

“I absolutely did not want it to go to the landfill,” Schut said.

Her three kids learned to play piano on the old instrument. She said she made her son play it one more time a few days ago before the recyclers hauled it away to their workshop. 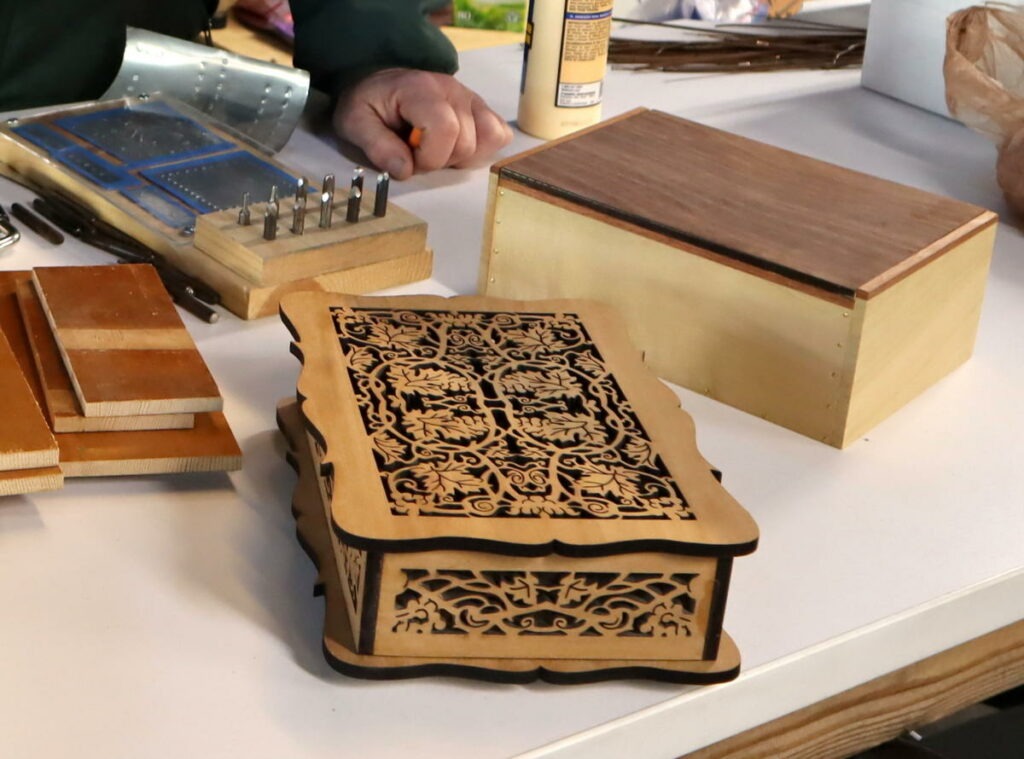 “I felt like I was saying goodbye to a family member,” Schut said about the emotional moment.

Rohde said the Schut family’s old piano is the sixth one his group has torn apart. He said the goal is to repurpose virtually all of it.

“Some of the woods are incredible,” Rohde said. “Some of the metals are really, really interesting. There’s lead. There’s copper. There’s brass. There’s different kinds of steel. There’s a lot of cast iron.”

“I am interested in the soundboards in particular,” Rohde said. “Some of the maple that we get is really highly figured stuff that would cost you a fortune now.”

Rohde said each part of a piano potentially has a niche market for re-use — with the old-growth maple, spruce, oak, mahogany and rosewood being perhaps the most valuable. The trick will be to turn this calling into a sustainable enterprise.

“We just hope to break even,” Rohde said. “This keeps us out of piano bars.” 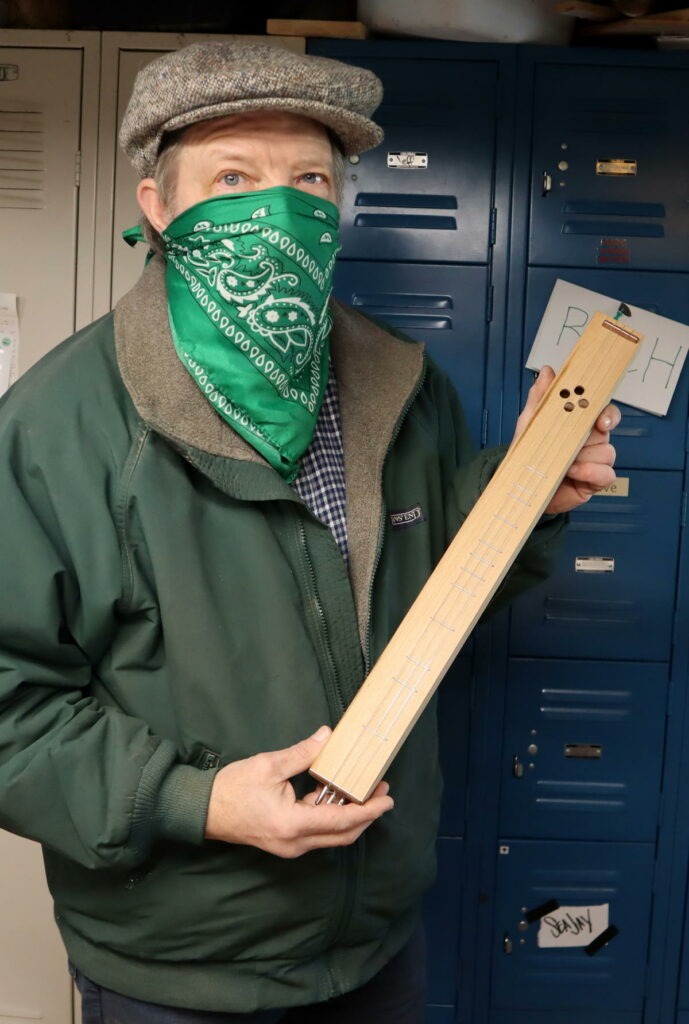 Michael Rohde shows a hummel he made from wood salvaged from a donated piano. A hummel is an old style of Northern European stringed instrument. CREDIT: Tom Banse/N3

The as-yet-unnamed group plans to advertise the salvaged wood boards and veneers and other parts for sale online in various specialty forums. Musical instrument makers and repairers — think guitars and dulcimers — seem like promising marketing targets.

Rohde said posts and dowels pulled out of a piano can be used by wood turners. Other upcycled end products in the early going are pretty wood boxes to hold things like jewelry.

“It can also be used to make really nice bird houses,” Rohde said.

Small parts, like dampers, can be used by crafters to make little figures. Tuning pins can be used for art, for example if laid out in patterns, he said.

The cast iron harps at the center of piano bodies (curvaceous X-shaped plates usually weighing 150 pounds and up) can be reused in furniture. They are striking, albeit unwieldy.

“I always thought it would be really interesting to make tables for piano bars out of pianos,” Rohde mused.

The Olympia buddies received tutelage on piano deconstruction from a veteran piano tuner and refurbisher on Whidbey Island, Washington. Dean Petrich said he is now developing a guide to give do-it-yourself advice for reusing an obsolete piano.

“I really want to write this book,” Petrich said in a telephone interview. “This is not just a local issue. This is a national issue.”

Petrich has accepted and stored so many cast-off pianos on his property over the years that he routinely takes some apart to use as firewood to heat his home.

On his website, Petrich suggests ways to turn old pianos into art or showpiece furniture. He gave as examples a baby grand turned on its side with shelves added to make a unique bookshelf or an upright piano converted into an aquarium.

The one piano part the upcyclers can’t sell are salvaged keys made from vintage ivory. Trade in ivory is highly restricted worldwide, if not criminally punishable, to deter elephant and rhino poaching.

“When we get a piano in, we tear all the ivory off of it and burn it,” Rohde said. “It’s not legal to even give it away.”