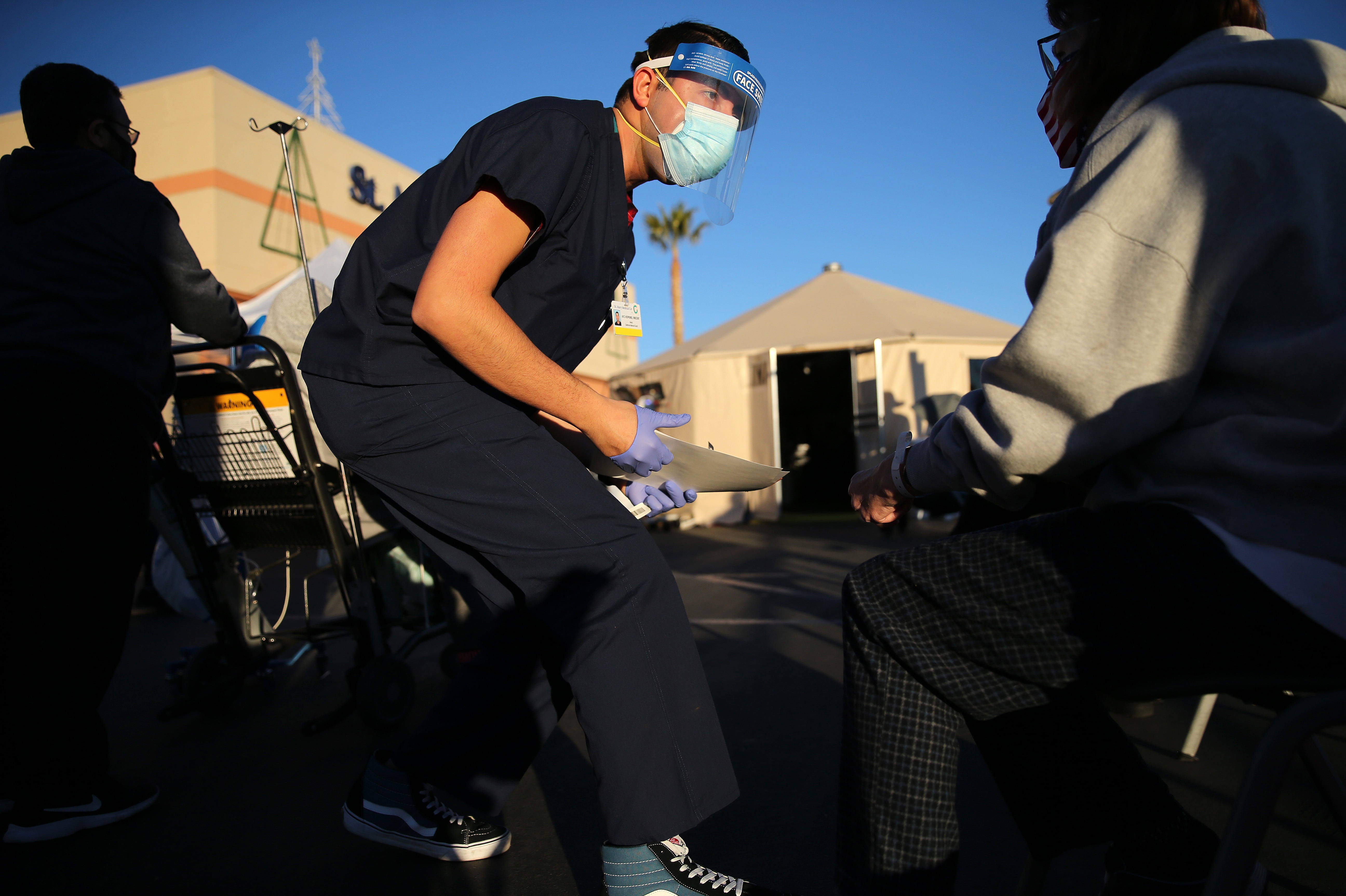 California Is 1st State To Hit 2 Million Cases, And Hospitals Are Out Of ICU Beds

The number of confirmed cases of the coronavirus in California has surpassed 2 million, according to Johns Hopkins University, as the virus has spread with startling speed in the state.

It’s the first state to pass that number. In the last day, according to Johns Hopkins, California saw 43,986 new cases and 319 deaths.

Cases in the state have skyrocketed over the last two months. The positivity rate has been steadily rising in that period, and is now at 12.4% — 5 points higher than it was three weeks ago.

The surge is overwhelming hospitals in many parts of the state. More than 19,700 people are currently hospitalized with the virus, with more than 4,000 people in intensive care.

A California National Guard medic prepares to check the vital signs of an incoming patient in front of triage tents outside St. Mary Medical Center last week in Apple Valley amid a surge in COVID-19 patients in Southern California.
CREDIT: Mario Tama/Getty Images

ICU capacity is under enormous strain. By the state’s count, there were 1,302 ICU beds available in a state of nearly 40 million people.

In Los Angeles County, the Times found that as of 9 a.m. Sunday, there were just 30 available ICU beds – a county that’s home to 10 million people.

In Southern California and the San Joaquin Valley, ICU capacity is zero, according to the state Department of Public Health.

“We don’t have space for anybody. We’ve been holding patients for days because we can’t get them transferred, can’t get beds for them,” Alexis Lenz, an emergency room physician at the medical center in Imperial County, told The Associated Press.

California ranks 36th among the 50 states, the District of Columbia and Puerto Rico in cases per 100,000 people since the pandemic began, the Times reported.

“Another spike in cases in the winter holidays will be disastrous for our hospital system and ultimately will mean many more people simply won’t be with us in 2021,” said Los Angeles County Public Health Director Barbara Ferrer, the AP reported.

California has seen more than 23,600 coronavirus-related deaths since the beginning of the pandemic.

A map of California on the state’s coronavirus dashboard is a sea of purple, a color that indicates high case numbers – all but three counties are at the “widespread” risk level.

The number of new daily cases has declined somewhat in the past few days.

“We are experiencing a modest decline in the rate of the growth,” Gov. Gavin Newsom said Wednesday, according to the AP. A decline over three days “doesn’t necessarily make a trend … but it’s a modest indication of a possible sign of some good news.”

Health workers and officials urged Californians to stay home and not gather for Christmas and New Year’s celebrations.

“If you gather for the holidays, our hospitals will be overrun,” Garcetti said on Monday, local outlets reported.